While we’re in between projects I’m taking a moment to give a little background on the history of the hoard house. As many of you may be aware, the general style of the house would be considered “bungalow”, also referred to as American Craftsman or American Bungalow. The craftsman movement grew out of the Arts and Crafts style that was popularized in England by William Morris. In the U.S., furniture designer Gustav Stickley published house plans in his magazine The Craftsman and the style caught on. These houses were very popular in the early part of the 20th century (1910 to 1930) as they were an affordable style for the emerging middle-class to build. According to the City of Lansing our house was built in 1920 which was right around the heyday of this style period.

In the U.S. the bungalow style is characterized by a one-and-a-half-story house with dormers and a roof that continues over the porch. The porch spans the full width of the house and is wide and amply shaded. While building materials varied around the country, in general the materials reflected those found locally. Since the profile is lower the house also fits gently into the landscape.

The interior of the American Bungalow is synonymous with “craftsman” style. Instead of the elaborate styling and fussy decor of the Victorian period the bungalow was pared down. The goal was a simple design with craftsmanship and attention to detail, instead of lots of “stuff”. Kind of ironic considering the current situation. Typically you would see a lot of heavier woodwork: beams, coffered ceilings, board and batten, pillars, built-ins, etc.

Another popular advent of this period, actually going back to the late 19th century, were kit homes. Many are familiar with the popular Sears kit homes and especially in the Midwest (cit) have probably heard of someone you know having a kit home. What you may not be as familiar with is that there were numerous other companies who sold kit homes, many on par with the popularity of Sears, but since they are no longer in business they have been lost to history. One of these companies, Aladdin Homes (which I became familiar with when trying to determine if our American Foursquare was a kit) was actually headquartered in Bay City, Michigan and sold kits nationwide from 1908 to 1954. Their entire library of catalogs is available at CMU’s online library. But be careful, as you can easily spend an afternoon looking at them 😉 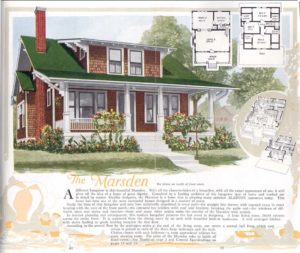 An Aladdin Home similar to our house

Kind of an aside, but if you are researching information on your property with regards to lot lines, previous and existing structures, building materials, etc. these are a great resource. The Sanborn Maps were originally created exclusively for the insurance industry as a way to get accurate information about properties they were insuring. The maps were in use from 1866 until they were phased out in the 1970s.  I was able to determine that our house was built after 1913 (this was the nearest year that maps were published). Today the Library of Congress has rights to the map files and will have them all online by 2020, over 500,000 files in all!

1913 Sanborn Map of our neighborhood. The house is situated on Lot 27 in the middle right.