The saga of heat in the hoard continues with getting systems in place. This will allow a furnace to be installed and activated, and our first stop in that enablement is electricity.

Why are we so hard pressed for heat? Well, climate control will help with a wide variety of projects, like drywall, painting, and flooring installation. And, it also keeps the building from hurting itself anymore than it already is from cracking plaster or freezing pi- well, maybe not freezing pipes.

Anyway, we felt that the most important next step in this goal was electricity. Not only is this necessary for the furnace, so we expand our work season, but it will also allow us to string up some work lights, extending each individual day as well. We can also then get a small workshop set up for all the repairs and construction we will need to do.

It would be extremely unlikely for any building to not already have a power meter, even if the power is off. The meter would be insulated from activating power with a special bracket, and then the meter installed over top. This prevents anyone from tampering with the bracket, and accidentally electrocuting themselves. 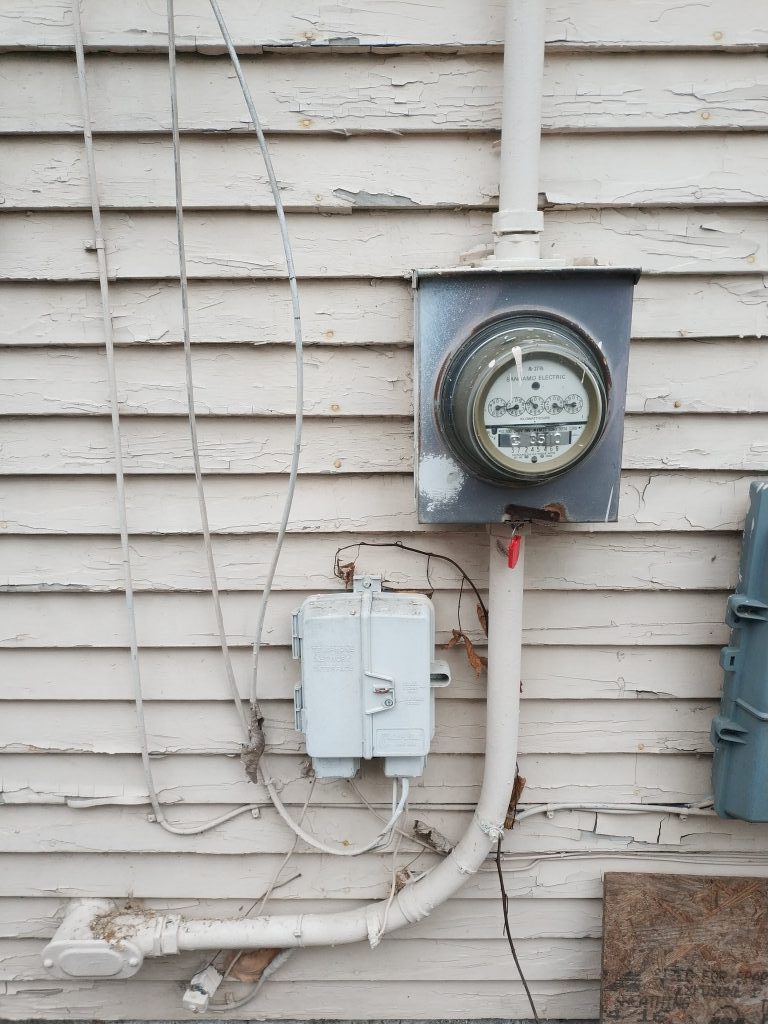 Kids! Can you spot the lockout tag?

Our hoard is no exception; it has a power meter that is currently disabled. I’m sure there’s a good reason *cough* NONPAYMENT *cough*. No trouble. Just contact the power company (BWL in Lansing) and have them turn the power back on. When we called them, they were amenable and scheduled a technician for the next day!

We knew from our talks with our electrician that there was a high chance that, because the building was off for so many years, they would require an electrical inspection to be performed by the city before they can re-enable service. And, of course, when the technician did his pre-arrival checks, he found no inspection, and put the activation on hold. Delayed once again.

If you DO happen to find that a building doesn’t have any meter, that’s pretty lucky! You get a brand new meter socket and mast! These would need to be installed via permit, wired with whips awaiting connection at the top of the mast, a porcelain anchor, and all inspected/stickered prior to the utility coming to wire up your house.

This is kind of a weird area for the hoard. We know that the electrical is in need of upgrades in plenty of locations, and we don’t know the status of a lot of it either, so we are planning to replace whatever we can’t positively verify as good. We’ll get into how we do that later.

So, does it make sense to have an electrical inspector in there now? Not really. He’ll probably just recommend what we already know. But, its difficult to work on rewiring the various branches when there is no electricity at the house. It’s rather nice to be able to flip on a circuit to make sure it doesn’t immediately explode. So, we need the inspection in order to turn on the meter.

As a homeowner doing their own work, in Michigan at least, one would simply call up the city and ask them to have the electrical inspector come out. They would ask you to then start a work permit. But, since this is not my primary residence, we must have an electrician do this for us, and open a permit at the same time.

This is where I come in. Our electrician has the ability to sub-contract to whomever they wish on the job site. The same way that you would, for instance, use FedEx to ship a package, and in some more rural areas, they might use a sub-contractor to move your package the “last mile”. Even though FedEx is shipping and tracking the package, they hand off to Joe Shipment to actually put the box on your porch, because FedEx has a large volume of other packages to take care of, and they trust Joe’s work. There is a huge industry of subcontractors in specific lines of work to do all that menial stuff. Electricians with too much work to handle can perform the important work that requires an expert, use their own employees for managing projects, and pay subcontractors to do the hard stuff.

Even though the permit must be pulled by a licensed master electrician, any electrician can work on the installation under their supervision. The master will still likely want to perform some critical connections, planning, testing, and final inspections before signing off on the project, but some of the more menial stuff can be handed off. Like, punching holes in walls. Or fishing wires into pre-existing boxes, or routing and stapling bundles of wires across the ceiling of the basement. Doesn’t necessarily require 10 years of experience, does it?

So how was the inspection?

Our electrician has a good rapport with the inspector, and the inspector agreed to have the electrician check over the meter-to-box circuit for safety and figure out if we do need a new box, and how best to execute that. He came by and did just that, first checking the exterior of the house, the wire from the pole, the mast, and all related accoutrement.

Next we opened up the electrical panel to find two rather new-looking wires coming from the meter right into the main breaker. This was a big plus, since now we know that sometime in the past few decades, that connection was replaced.

All of the wires inside of the box were also plastic covered romex cable (I’ll get into that later), which also indicates new-ness. There was really only one item we had left to confirm, which is a ground for the system.

New box installations require two separate grounds: one inside the house to the water supply line, and one outside the house to a long (10 foot) copper rod pounded into the earth. These are connected using large gauge bare copper wires. But our box is not a new box, and was likely installed before this requirement came to pass. So, there is only one connection: the one to the water meter.

And when we went to check it… 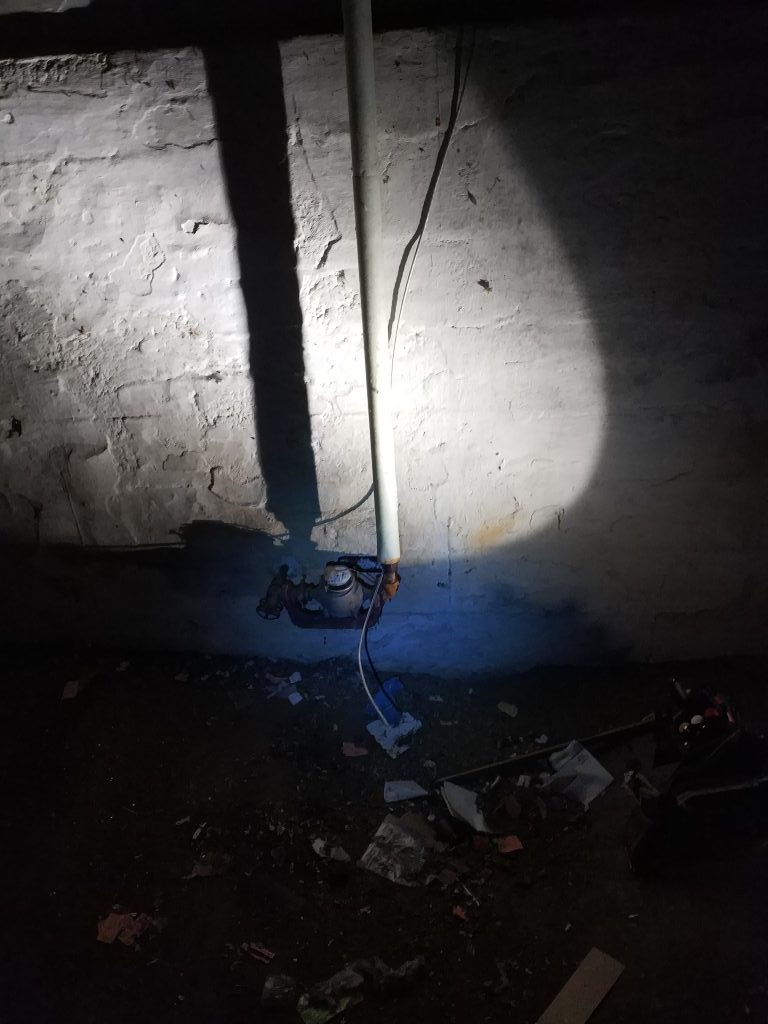 Well, there it is.

Said wire was dutifully ran all the way to the water meter, down a secure conduit, and cut flush right at the end of that conduit. There was no ground for the system at all. Possibly, the water meter was removed or reattached or replaced, and the grounding connection was “temporarily” removed or “accidentally” cut. And, because everything was still working, it was forgotten.

But, if this neutral utility wire got degraded or cut, or there was a surge or imbalance, the extra electricity would need to go somewhere. So, this connection to the water meter is necessary for safety.

Luckily, after removing the conduit, there was plenty of bare wire left inside to make a proper new connection. The electrician grabbed a few clamps from his truck and made two connections. One on the house side of the meter, and one on the street side. 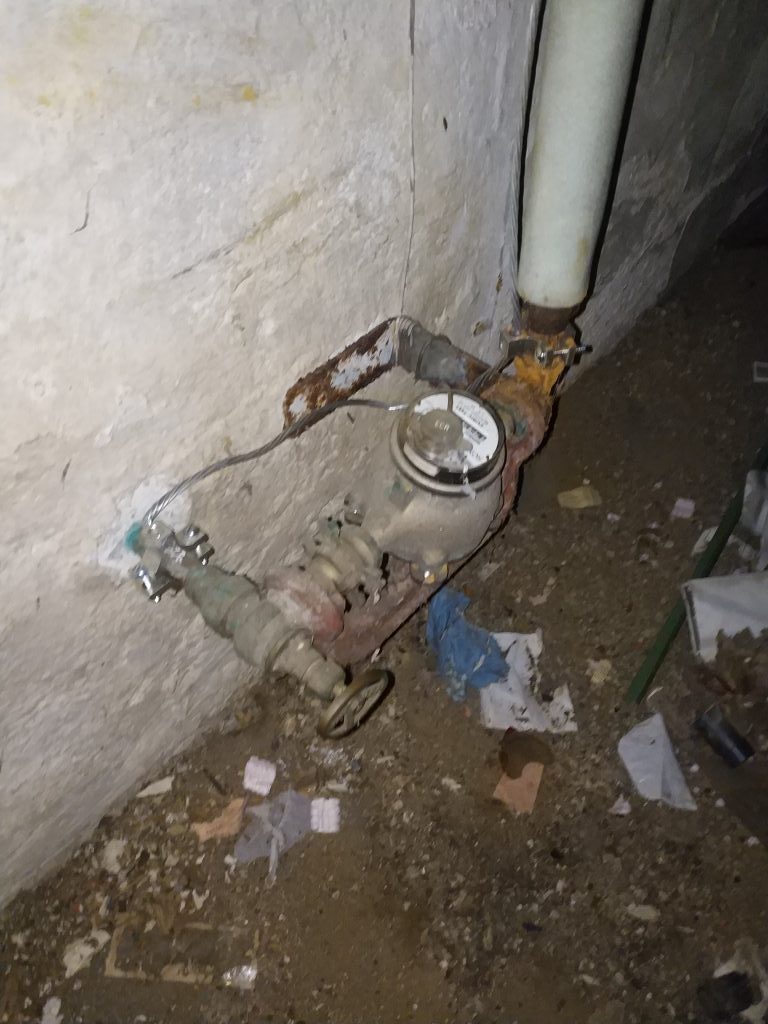 My phone was in the shop, so I used a potato to take this picture.

The point of two connections is so that electricity will head right out to the street instead of through the water meter, which could damage it. Additionally, if there is an electrical ground connected somewhere else to a water pipe (which is uncommon but not unheard of), it can also safely bridge the meter.

Now the system, with its main breaker off, can safely be energized and worked on! Our electrician has contacted the city and let them know that it was ready for power, and they are reporting back to the utility. We can then call them to re-schedule our originally scheduled scheduling for turning on the power! Can I get a woop woop!?

Yeah! And what’s even better? Once electricity is on and we have wires to trace…