Our Second Goal: Do It Yourself

Out of the three primary specs for a project (time, cost, and quality), they say you are only allowed to pick two. Our first goal covered one way that we can save save money on the project, at the expense of time. Well, time certainly does not seem to be of the essence to us, since our second goal is also a money saver:

Whenever possible, we will do the work ourselves. 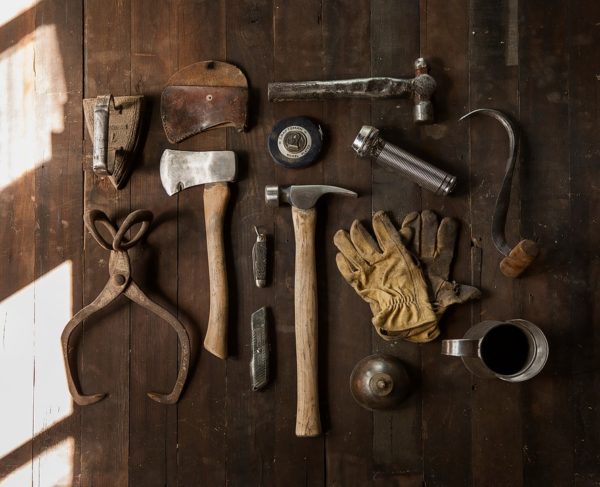 I’m positive we won’t be using these tools though; thanks stock photos!

One of my life mantras is that if someone else can do it, I should be able to also. This has been a double edged sword, though. I’m certainly not an expert at everything. At some tasks, I’m barely even a novice. But I would like to think that I learn quickly, and the best teachers are trial and error (right after pain, which has taught me to always wear gloves, pay attention, and cut away from yourself).

In our other buildings, We’ve learned a lot of basics about various systems, including troubleshooting, repair, and replacement. Hill and I are at the precarious stage now of knowing enough to be dangerous, which we must constantly check by knowing that we don’t know everything.

The internet has been an invaluable resource for us in this. Though local building codes are not often plain to read, stories about the successes and and failures of others gives us the trial and error teacher once removed. Talking to someone in the know for advice is also often free, or might cost you as much as a pint at the pub.

While removing a temporary and supposedly non-load-bearing wall in our basement, it was discovered that someone had cut through 3/4 of the main beam (the big 8×10 that the floor joists go into), after having supported the cut end of that beam with a 2×4. That end being on one side of the chimney (which split the load) meant that, at most, around 3/8 of the weight of the house was essentially bearing down onto this 2×4. That’s a no-go for removing that wall. Most scarily, I didn’t realize this until I had cut entirely through that 2×4 and pinched my sawblade.

After a small amount of freaking out, I figured that the full 3/8 weight of the house bearing there was likely impossible, since I discovered that the end grain load of a 2×4 is only around 700 lb max, and with houses weighing around 50 lbs/sqft (thanks to information from house mover forums), 3/8 of our house is around 13 tons. A lot of the actual load is coming down through the outside walls. But, I calculated the beam’s replacement as if it were a much higher load. The internet provided me with the specs of structural beams of various spans and dimensions, and I came up with a double 2×10 LVL on two doubled 2x4s to move the load for the opening to the sides, and should hold up 6000 lbs (with the doubled 2x4s being the weakest part; still at minimum 4x stronger than the old support). I had a construction expert neighbor come in to give some advice on holding up the house with 2×4 kickers before removing the errant 2×4 support, and also spoke with a few people at the hardware store about proper fasteners and plating (which I’m sure I also overdid).

Keep in mind, we are not professional builders, and I knew nothing about structural lumber before opening this wall. Without the magic of the internet, material data sheets from suppliers, and helpful humans online and offline, I would have called in an emergency construction service, which possibly could have cost several thousand dollars. Instead, I have what I know (again, thanks internet!) is a strong and safe support for this load, and cost around a hundred bucks.

But back to the hoard.

I know that there are a lot of construction projects that require permitting with the city, and I fully intend to continue pulling permits where required for safety inspections. When doing the work yourself, having someone else check your work is especially key. So those of you wary of doing your own work or making sure your house doesn’t burn down, I say, you are very smart to be cautious. My life mantra has no exceptions for caution, so I am cautious too, but I am always willing to give something a shot.