The Inside (First Floor)

There’s really not much I can say to describe the inside of the house other than ‘trash hoard’. If you are a neat freak or a fire inspector, look away now. I’ll just mostly let pictures speak for themselves: 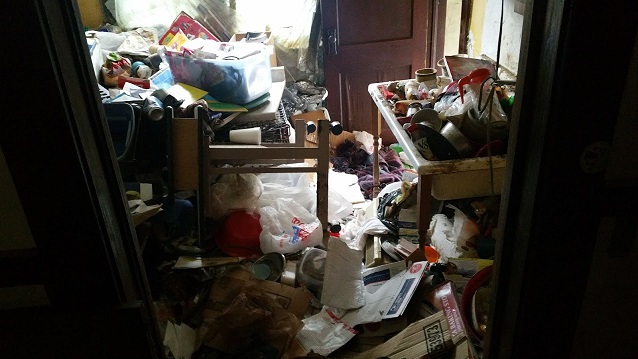 The Kitchen, from the Dining Room. Basement access and side door to the right. Let’s try not to think about the fridge. 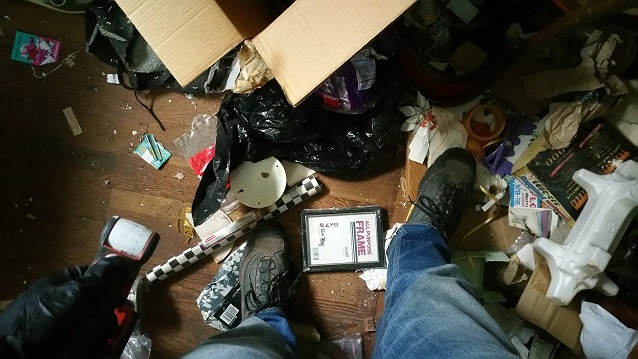 A rare patch of bare floor. Oak boards with a field of pine in the center, a common money saver. 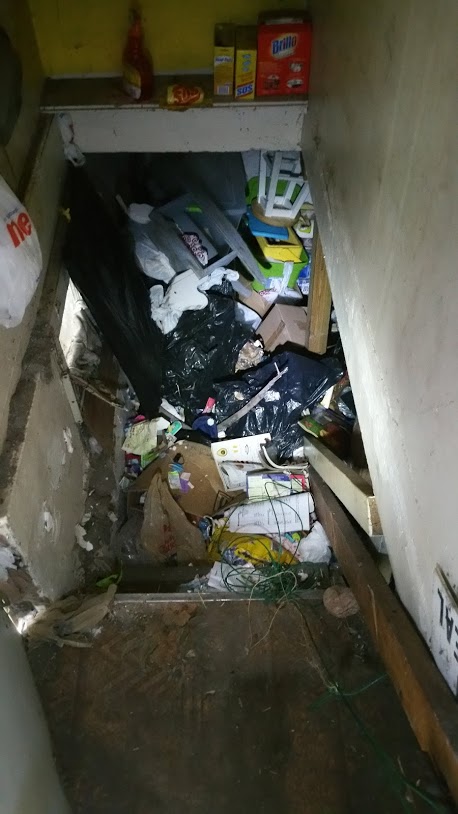 The Basement, yet unexplored and inaccessible. 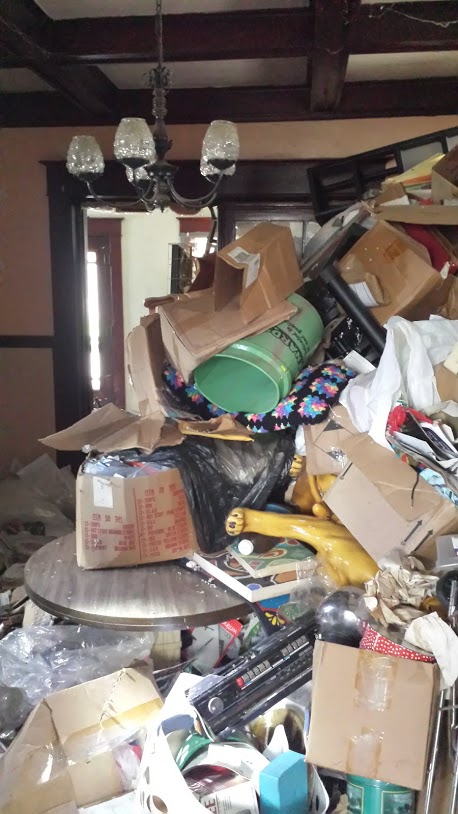 While walking through the stuff, we found ourselves repeating one thing:

What have we done?

There’s really no good place to start. So much is unknown, so much is instantly interesting, so much to explore, so much to haul away, so much… STUFF. I don’t think we will be able to do a thing to the inside without first having a dumpster on site.

This begs the question:

It did not happen overnight. I can guarantee this because there is mail dating back at least 20 years. From the looks of it, nothing got thrown away, regardless of age or usability. There are tins, food containers, bags of trash not taken out, magazines, old pill bottles, old furniture, multiple computers and stereo sets (indicating that they were replaced and the older model kept), construction debris. There is not enough time in the day to try and describe the contents of the house.

Most likely, collections grew from the corners, and eventually the pathways through the house got narrower, and avalanches or complete loss of control occurred, and those pathways filled up with paper as well.

There were good intentions, though. We discovered many items new in the box, intended for cleaning, decorating (particularly Christmas), or organizing, as well as home supplies or replacement furniture. But, as soon as these items made it back to the house, they were gently placed on top of the pile; a project for another day. Sorting was clearly a task for later, but someday.

Many of the papers that were left at the top of the stacks were all themed around the neighborhood. There is information (a disturbing amount of information) about other houses in the area, including those in which the owner had no interest. FOIAed tax receipts for property on other blocks, deeds in perpetuity back to the original claim from the land for vacant lots, letters to the City Treasurer asking about a tax foreclosure of a 4′ wide easement sandwiched between two other properties along the commercial portion of the Grand River, and a tome of drawings, letters, and legal descriptions for her other neighbor’s property (not us), to support a dispute over a shared driveway and shared (but separated) garage. The direction of the letters and papers seem to be geared towards catching someone in a lie or conspiracy, usually the city itself. I understand that the owner started a number of frivolous lawsuits.

In these same folders were empty envelopes with phone numbers and names doodled upon them, a copy of the Consumer Protection Act from the mid 70s, a short note about interstate prison transfers, details about electric railway cars, and a few mouse droppings. If these items were related, it is only in the fact that they all are able to fit inside of a folder.

That seems to be the general theme for the house; if it fits inside the house, it goes in the house.

Painfully, the level of disorganization and inability to move around did not dawn on her enough prevent her from keeping her pets in the house. The second floor is littered with birdseed from parrots, and there is a dog crate in the kitchen. I’m not sure if her dog was permitted free reign of the house while she was away, but there is really no way to tell. I would suspect that in the interest of protecting her belongings, the dog was unfortunately kept caged up in the kitchen. (For reference, Animal Control was called some 4-5 years ago, and she was ordered to immediately relocate; I learned from the owner’s family that he lived until the week before the owner herself died).

Back to the plan.

As I said, we can’t do anything without taking stuff out of the house, but a dumpster has to be present, since there is nowhere to put it but straight in the garbage. We are on good terms with the far neighbor, who shares the driveway, and we should be able to put a dumpster up front for a while. But from our yard post, recall that there is a SWEET CONVERTIBLE (Suzuki Vitara) that the old owner is working to remove. Hopefully progress will be made soon so that we can start blocking that driveway.