Our third dumpster has come and gone, and with its departure, there is only one room left to declutter (not counting the basement)!

This round of cleanup saw us through the “bird room”, where the owner’s parrots were supposedly kept, the kitchen, the first floor back room, and the small remainder of the dining room, as well as a portion of the second floor bathroom. 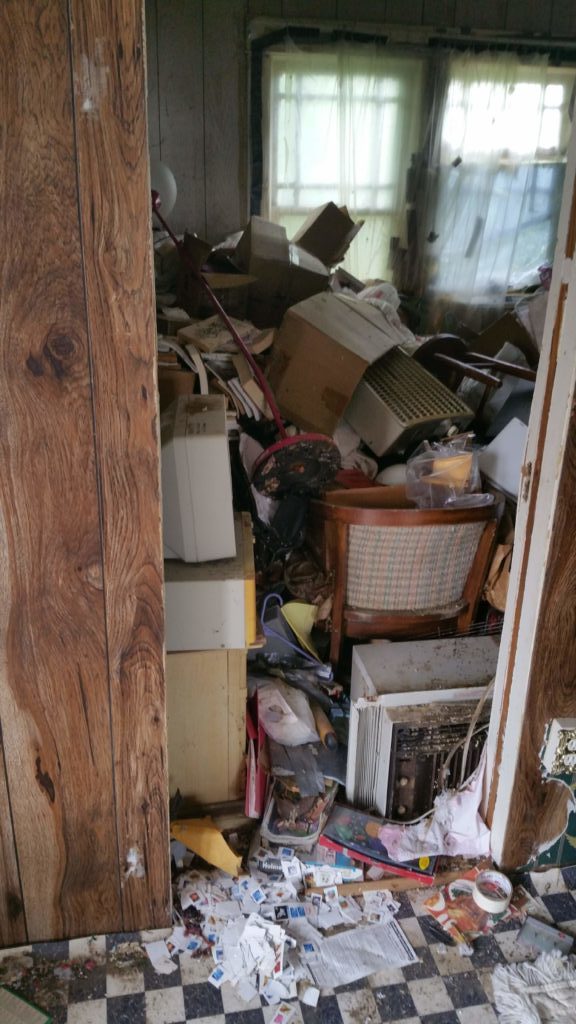 How do we know it’s the ‘bird room’? Well, the bird cage was a strong indication. The pile of defunct air conditioners and space heaters (many of which were still plugged in!) was another. This room also seems to be the locus of birdseed, with the thickest layer of shells of all the rooms. 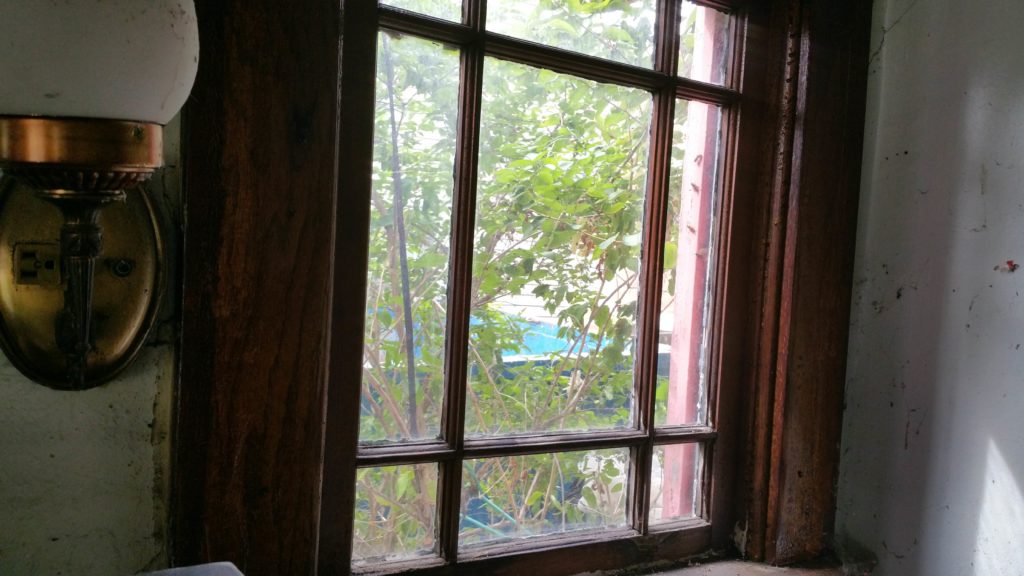 In the wall, no less!

They caused quite a buzz among our workers, who swarmed to see the hive. Some decided it wasn’t any of their beeswax and buzzed off. We continued to comb through the hoard but the apiphobic among us droned on about the problem, and I think that’s a world record for bee puns.

Plus, this is the wall that we need to take down in order to fix the bow in the chimney. Great.

But, this is a problem for future AJ. Sorry, future AJ!

Back to the spoils!

I know, I know, you are here to see the treasure! 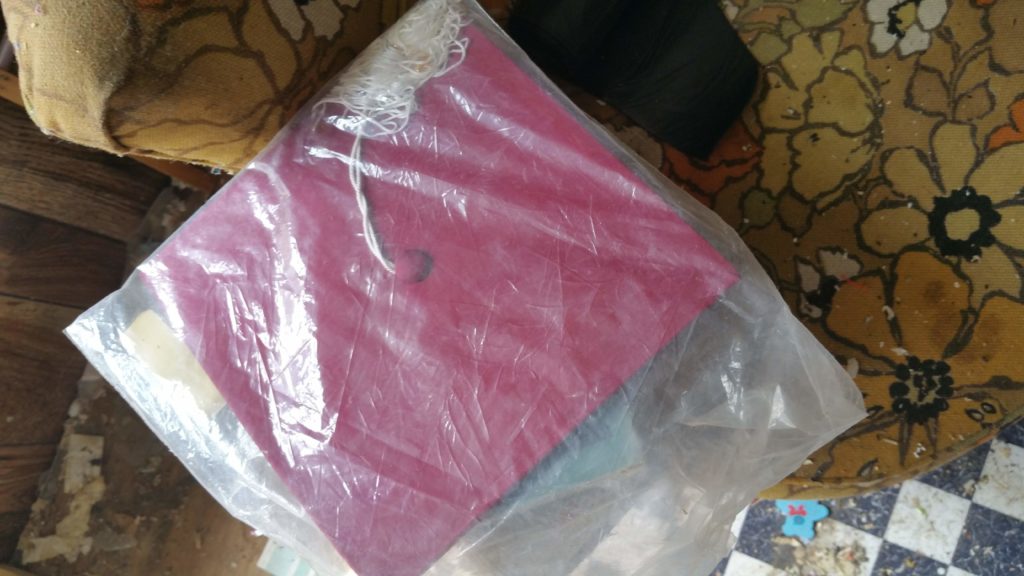 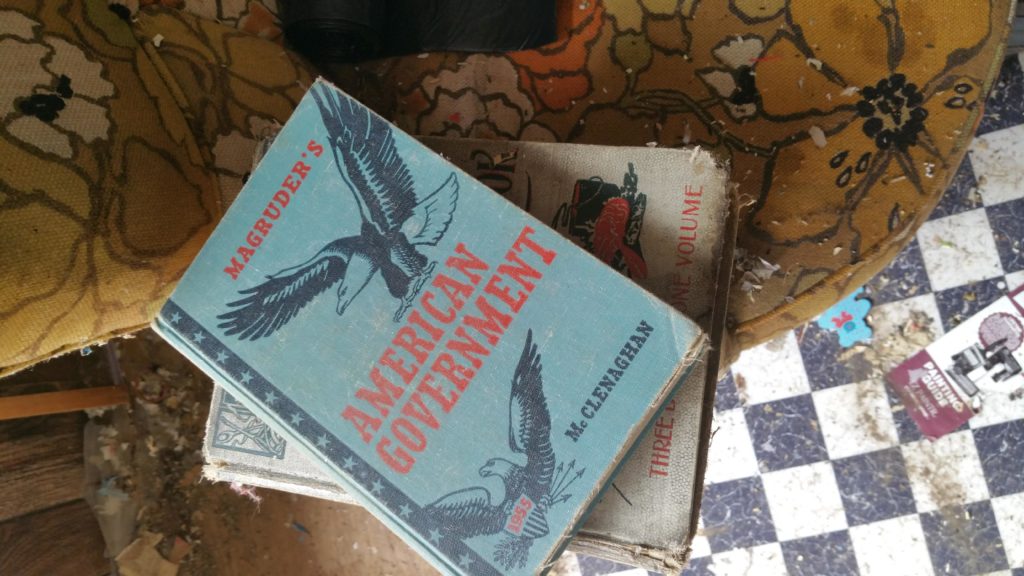 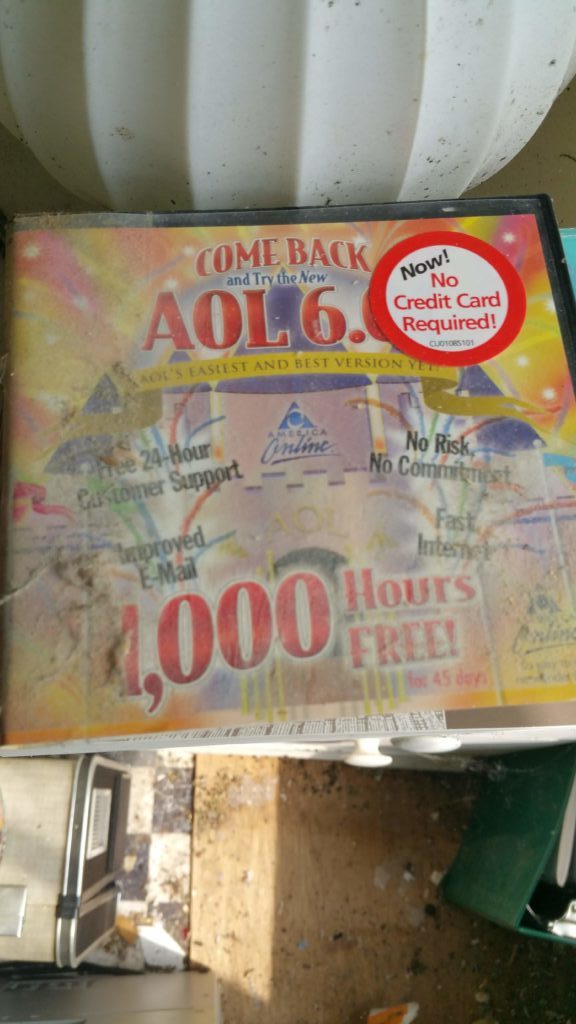 Couldn’t you just keep getting these CDs and use AOL forever at no cost? 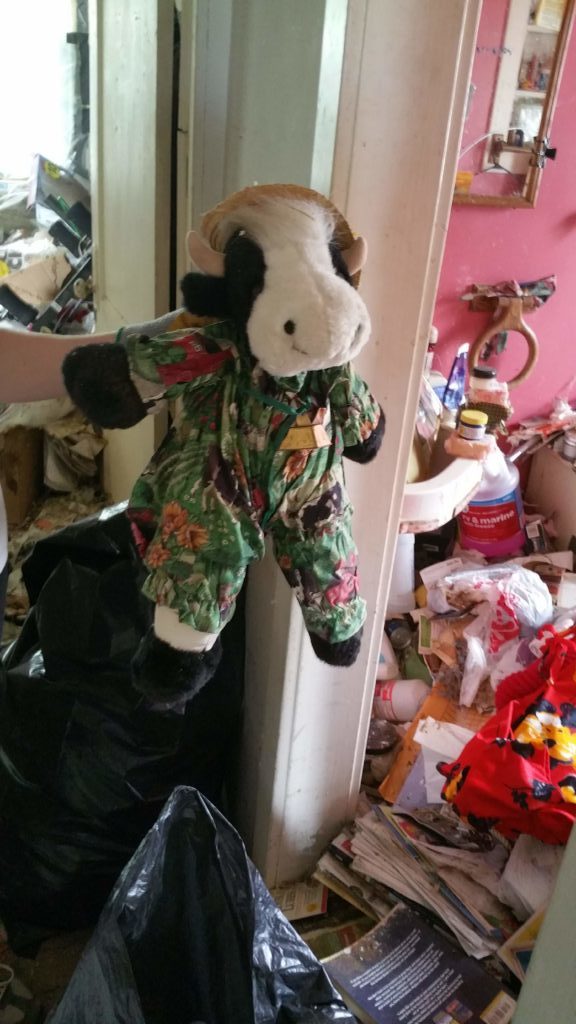 It cow. Bathroom pictured to the right. 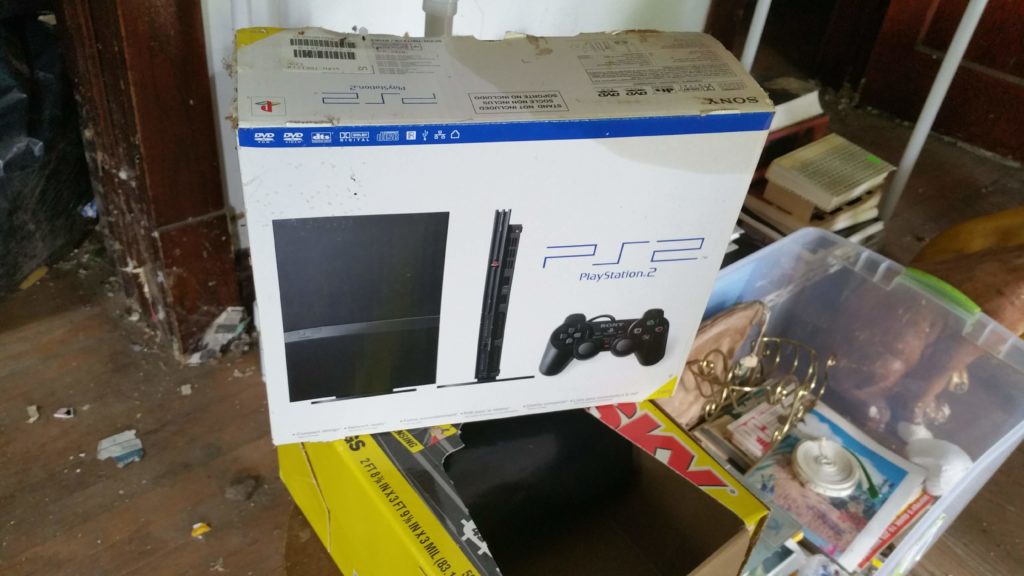 A Christmas present supposedly awaiting wrapping, but forgotten. Everything is still inside and in its plastic bags! 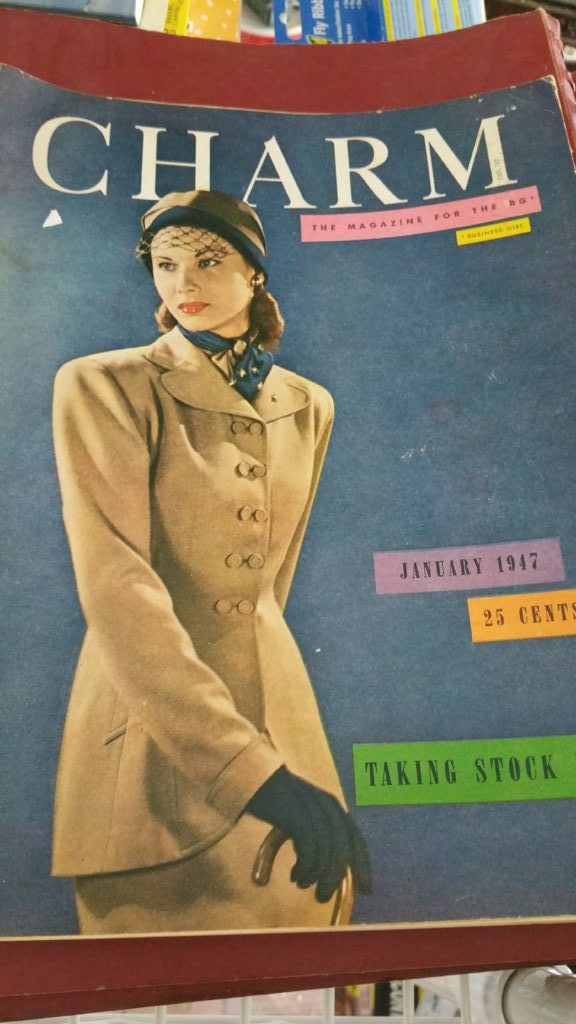 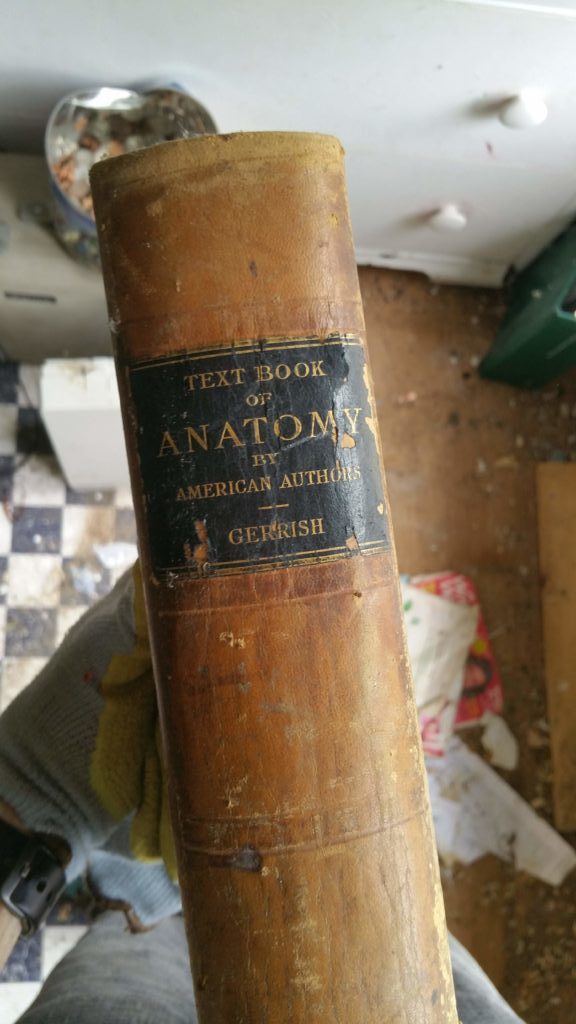 A bit tattered on the spine, but very interesting color plates inside. Overall pretty nice for 107 years old. 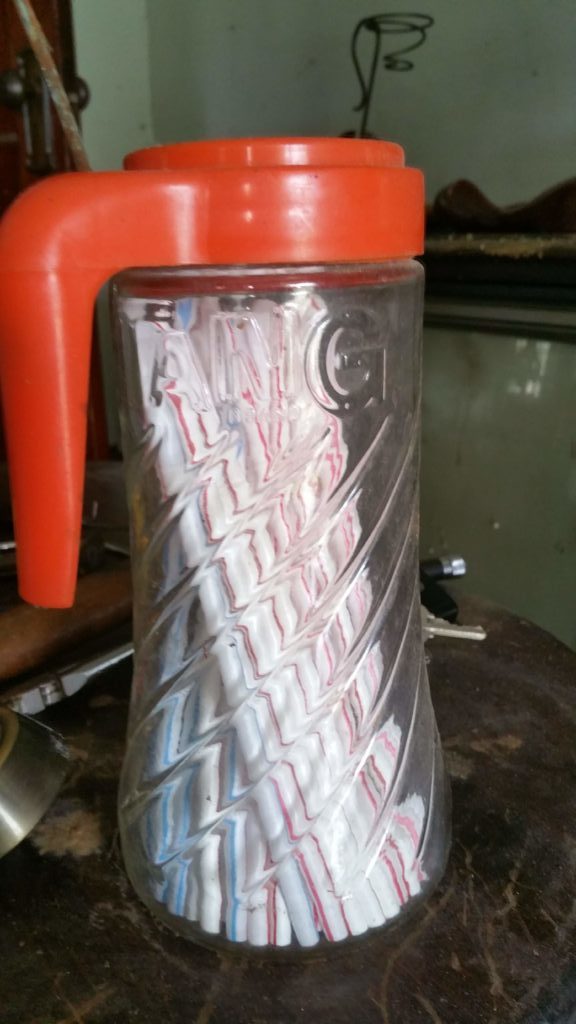 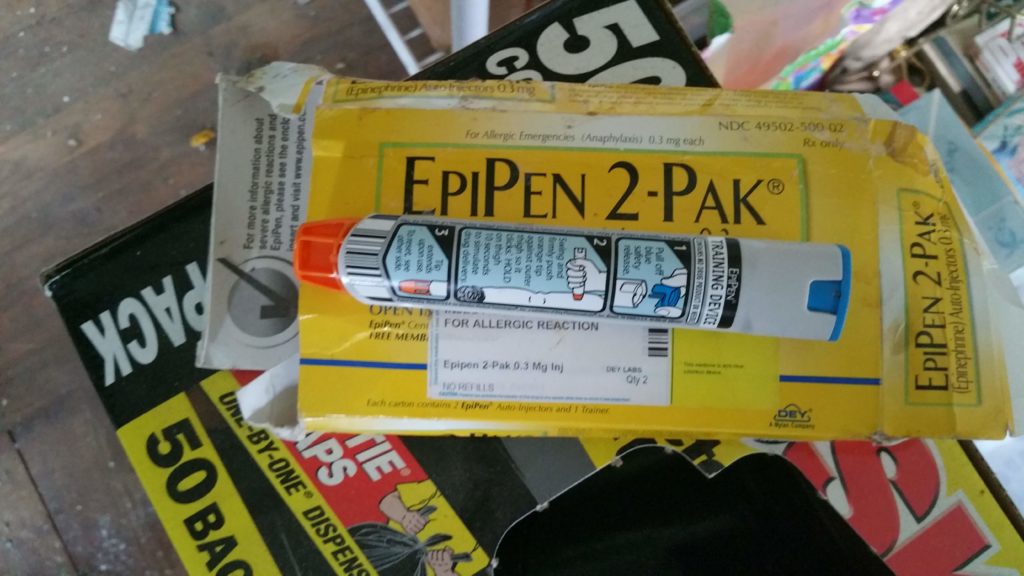 I think you are supposed to refrigerate these, but at the time, the fridge was probably inaccessible. 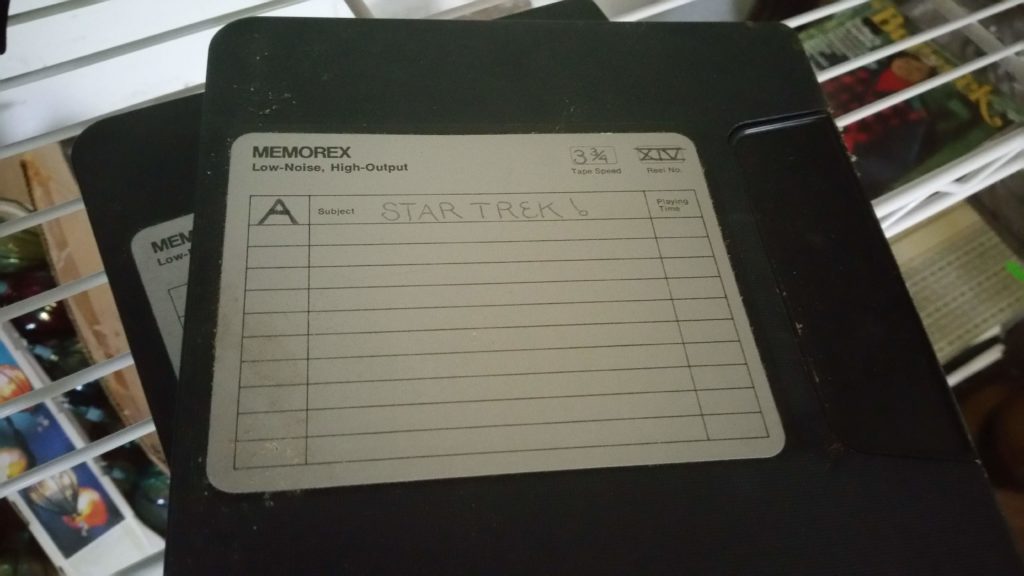 Not sure what 14 part audio recording of Star Trek could be from. Most of the other parts were degraded.

The bird room was both the easiest and most difficult, since it was a short walk to the window to dump trash. But literal shoveling was required because of all the seed. It is also unnerving to see multiple ‘granny’ extension cords chained together to plug in space heaters, which were still plugged in. This place could have gone up in flames at any time. 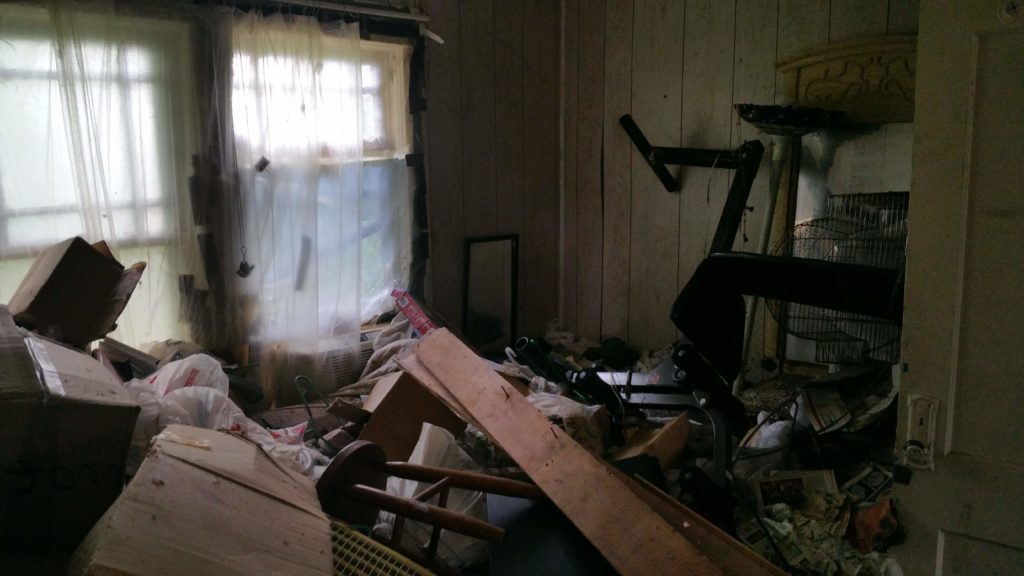 How do you even get an exercise bike up there? 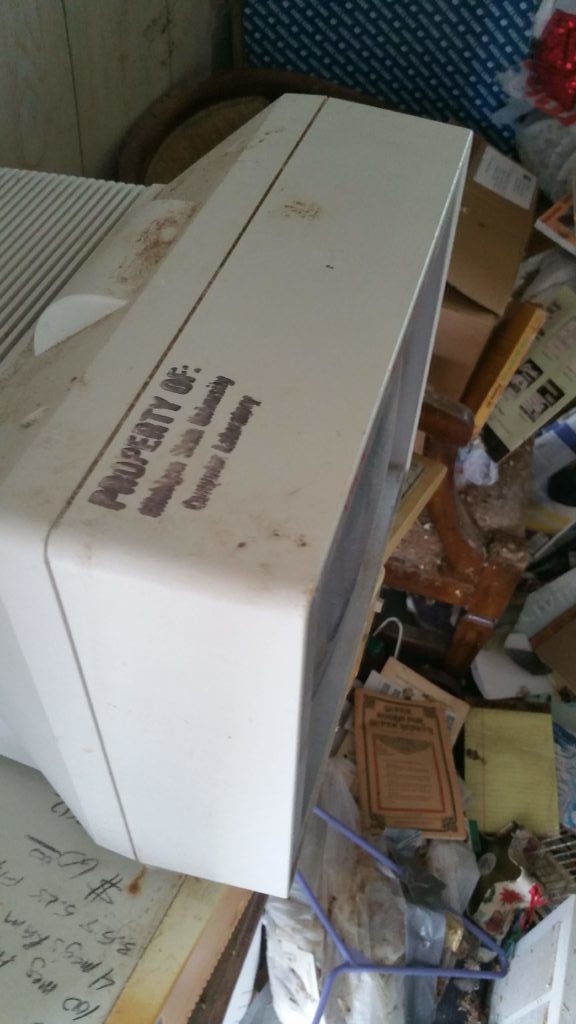 This appears to have been garnered legally.

The bagging continued to the corner to uncover… 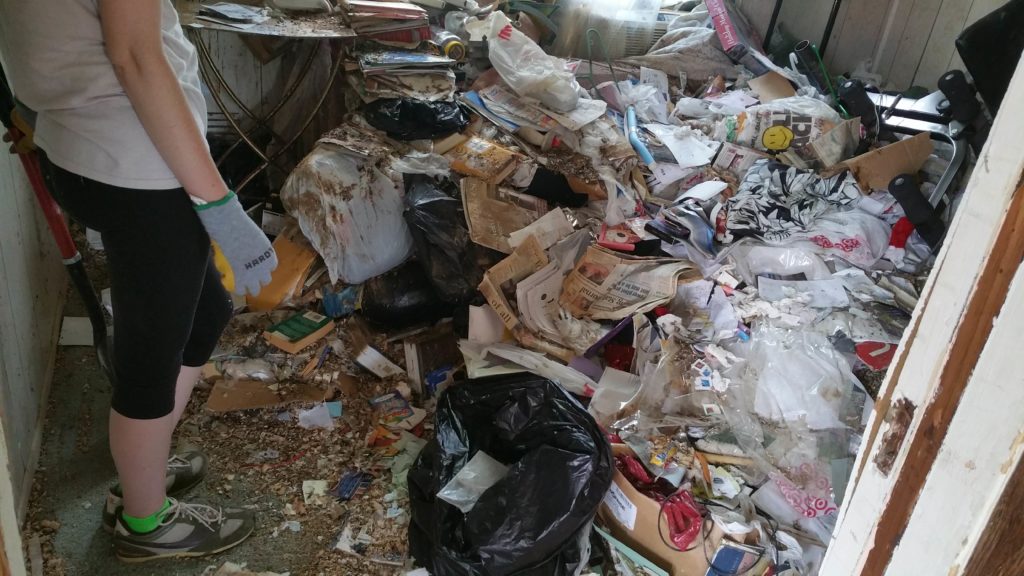 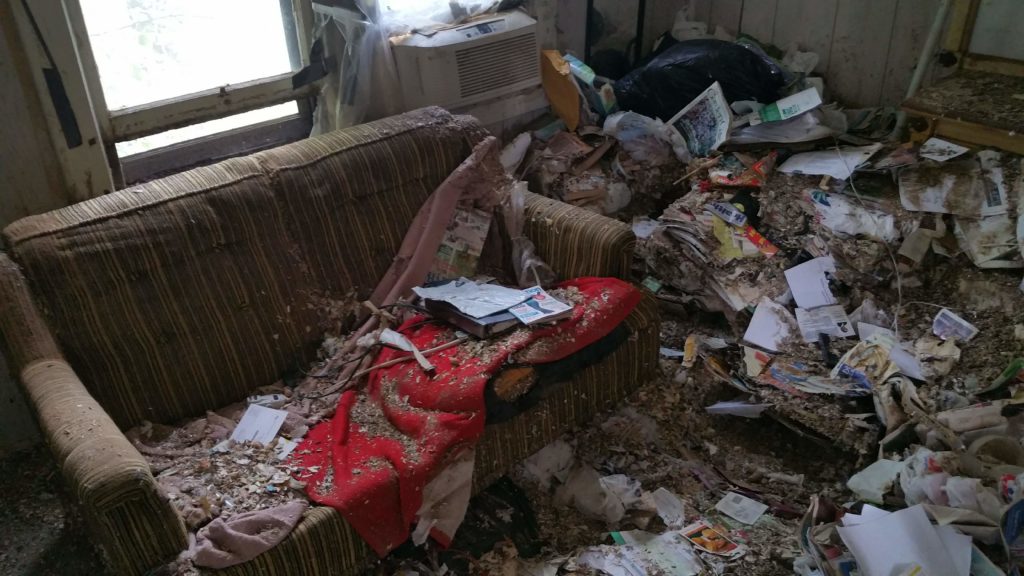 A whole couch! This was completely invisible from the initial investigation. It covered up another small nest of seeds and mouse shreds. This was actually a satisfying find, since moving big pieces is easier than bagging up small stuff. 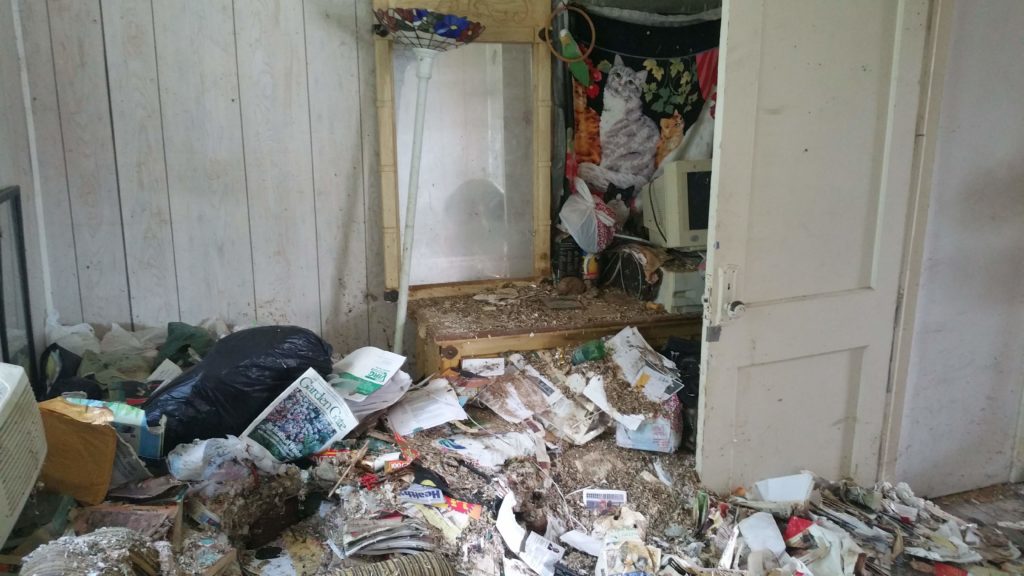 You can see the epic closet drapes from this angle. 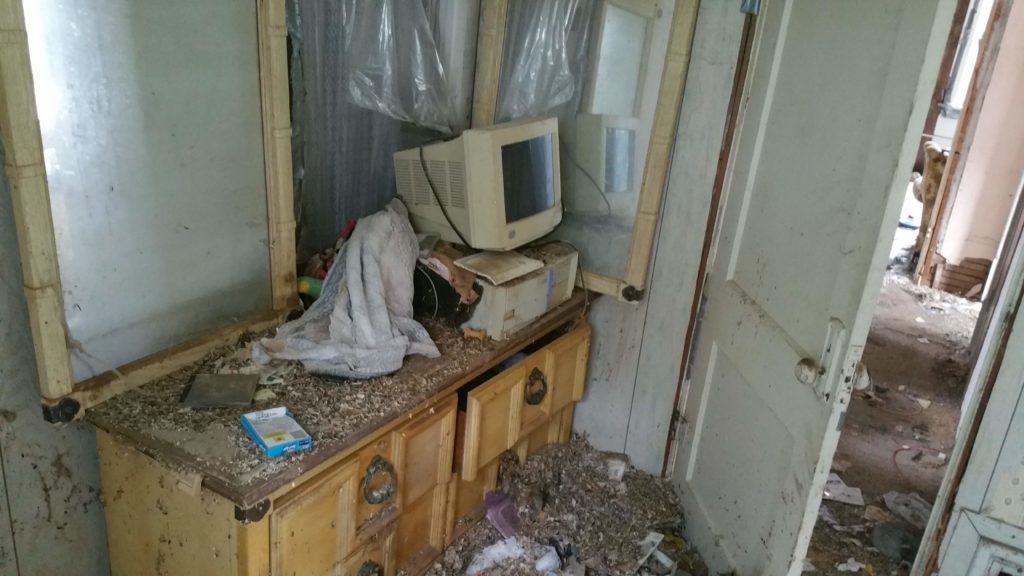 This dresser and computer were also in poor shape.

After shoveling our way to the dresser and discarding its contents, we were able to enter the barricaded closet. 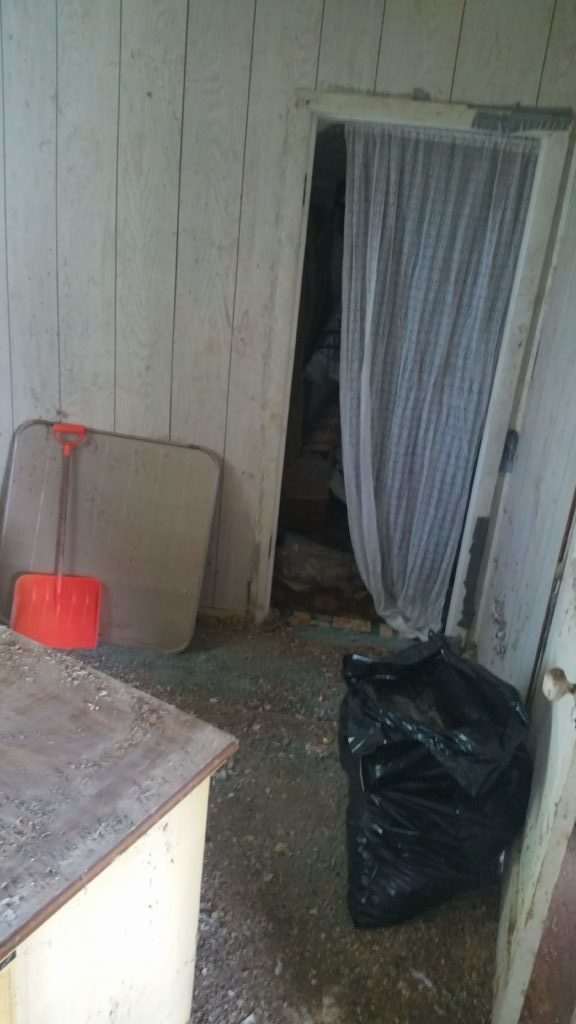 What could possibly have been so foul to have necessitated putting a desk in front of it? 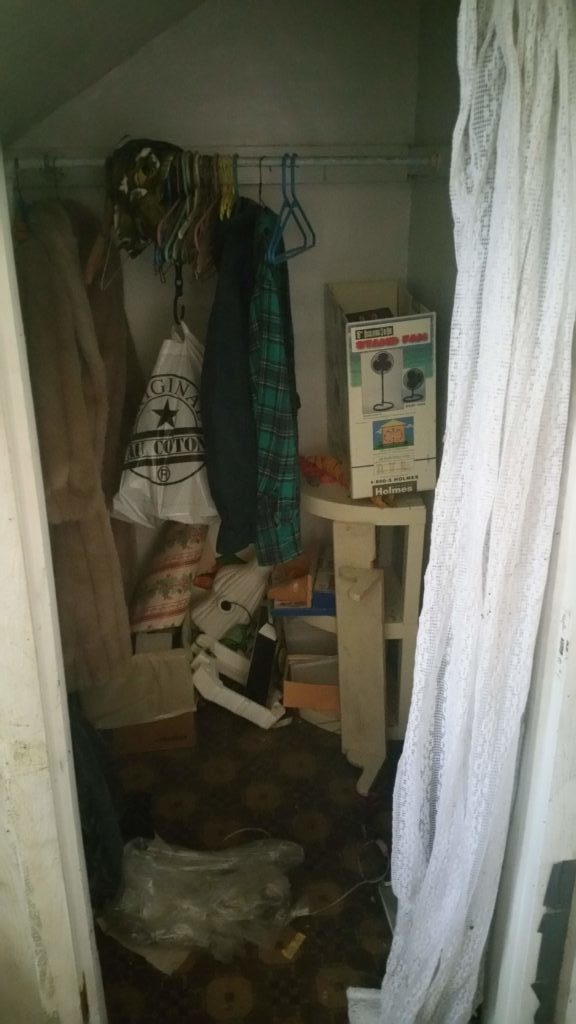 Actually… this was probably the cleanest room in the house.

The closet contained seasonal decor and a few pieces of clothing. It also contains a large metal shelf, which could be of use later for holding temporary materials during renovation. Or just for holding the junk we want to keep. Like this: 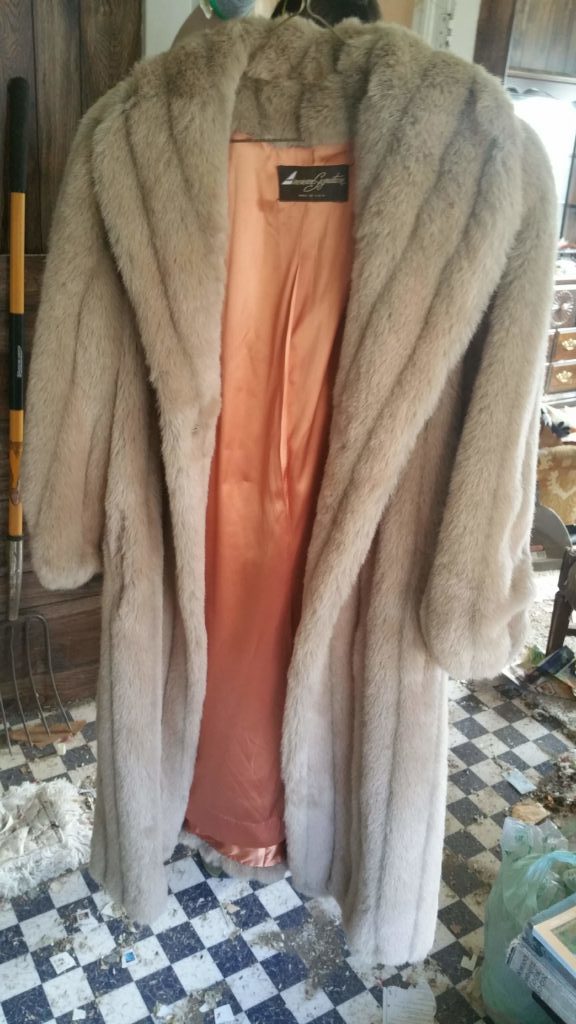 A quick tug on the carpet left us with this beautiful linoleum and an empty room! 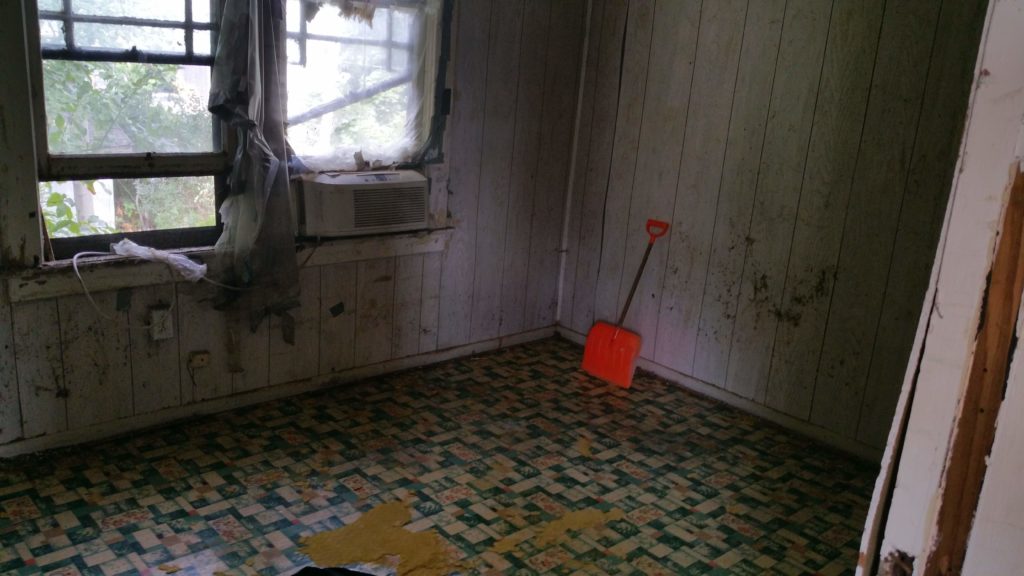 The bird room, devoid of evidence of bird.

I have been hoping to keep the upper window sashes, but the one over the AC here is in really bad shape. Luckily this is the back of the house, so if some replacements were necessary, this would be the best place to put them to avoid changing the look.

To keep things a bit more readable, I won’t bombard you with photos of the other rooms we cleaned up this time. But come on back for part two to see the… disgustingly interesting things we found there.