If you are most people, like me, you have never actually picked a real lock in your life. But its one of those ‘manly man’ skills that is handy to have when you are in a pinch, like when you get locked out. And if you recall the picture below from the dining room cleanup, I’m in a pinch. 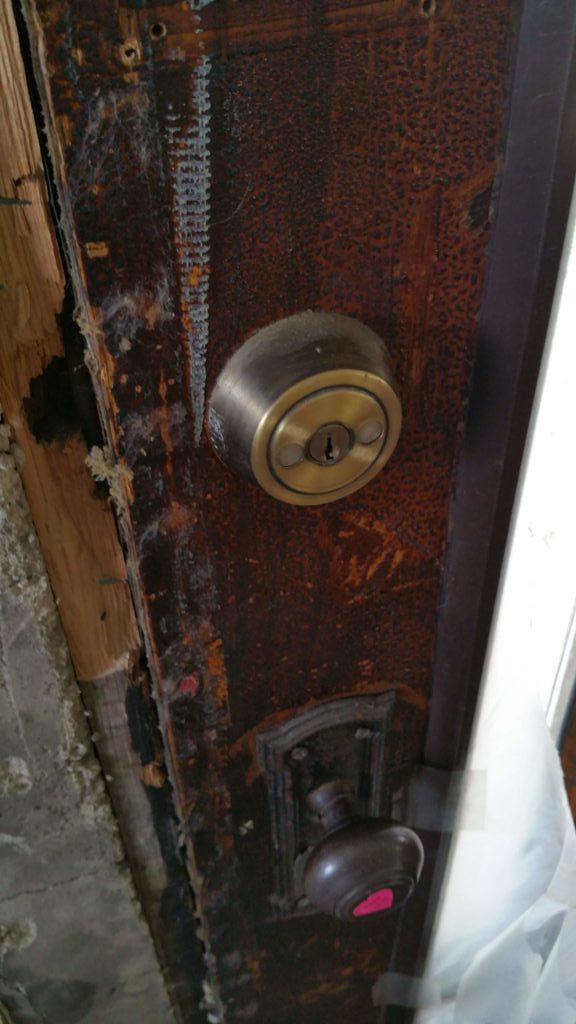 The front door deadbolt is unlocked, luckily, but the since it has a very large center window (which is currently plexiglass, indicating it may have been broken into before), a double-keyed deadbolt was added. Just to make it more complicated to exit in the very likely case of a fire.

Through the hoard, we found a few locksets, likely which were intended to replace this very lock, or the lock on the side door we normally use. This may be because we cannot find the key to this lock, so the owner may have lost it. In more ways than one.

This particular lock, since it is double keyed, has the added security feature of guarding the screws so the deadbolt cannot be removed and manually manipulated. The screws are normally accessible in the unlocked position, so you can remove the key and work on the lock normally. But not this one. Oh no. This one has to be partially locked to allow screw access.

A coworker and reader offered the use of his lockpick set to alleviate my conundrum. So the learning began.

How to pick a lock

A lock is made up of a cylinder, or ‘plug’, inside of a round sleeve. This has spring loaded pins going through it, which are split in half (the driver pins on outside, and the key pins on the inside). The cylinder can only spin in the sleeve when the split parts of the pins line up with the break between the plug and the sleeve, called the ‘shear line’. 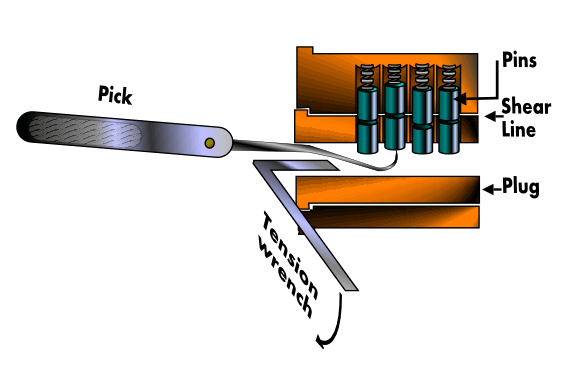 There is a bit of slop between the pins and the plug, which can be felt when you insert the wrong key and jiggle it. So you are, in most cases, able to insert a tension wrench, which is a flat piece of steel bent at an angle, into the lock, and while applying turning pressure, manipulate the pins one at a time. This is called Single Pin Picking (SPP). Different kinds of picks give you different angles at the pins, or let you manipulate multiple pins at once. There is a secondary skillful technique called ‘raking’, which involves some of the more complicated picks with multiple teeth. But, for the regular user, a single hooked pick is all you need. This could easily be replaced with a stiff paperclip with a small upturn at the end. I mean small. Like 1/16″ might be too much.

For common locks, you will feel a definite ‘click’ when the pins hit the shear line, and that pin is now set. The tension on the plug keeps the pins just split enough to not return to their neutral position. Once all the pins are set, the torsion wrench will spin the plug, actuating the ‘tail piece’, which moves the deadbolt in our case.

There’s a lot of cool and satisfying videos on YouTube on this subject, most of which are coupled with warnings.

The Illusion of Security

These videos will all tell you:

Locks only keep out honest people!

Which is true. Every lock in the world can be unlocked. And, if someone REALLY wanted to be inside your house, or your shed, or your garage, or your car, they would find a way inside, regardless of your locking system. Padlocks can be cut. Deadbolts can be picked or kicked in. Door chains or bars can be sawed. Hinge pins can be removed. Shoot, you can bore a hole right through the door or wall if you wanted to.

This presents the illusion of security, which is the phenomenon in which you believe your house is secure because you locked the front door. But, your windows are still made out of very breakable glass, particularly the patio door. And you left the door into the attached garage unlocked, because you can just close the garage door. Garage doors, by the way, when partially lifted, sometimes will think that they are crushing a person, and compliantly open the rest of the way for you. Or anyone.

The best things you can do to avoid burglary are to make your house unattractive to burglars. This includes turning on porch lights or having light-sensing or motion-sensing exterior lights, particularly along that quiet alley. Putting lamps on timers, or better yet, control them from your phone so you can ‘move around the house’ while you are away. I’m sure there’s an app for that. (Do people still say that?) Keep your curtains drawn or your sheers closed so you can’t see inside at night. Similarly, don’t leave valuables, like tablets or laptops, out on the kitchen counter when you aren’t using them. Try not to wash your Bugatti or count your Disney stock certificates in the front yard, further advertising the untold riches stored in your house.

And, if you don’t have a security system, consider getting one, which has the added bonus of giving you a break on your homeowners insurance. If that’s not to your taste, you could also just pick up a yard sign on ebay. Burglars don’t want the added hassle of disarming something, and will move on to another less complicated target.

How I picked my lock

But back to the matter at hand. I have to ‘break in’ to my own house. Let’s get to it!

I first addressed the lock from the inside, since the outside is right rusty from not having a proper storm on for a decade.

The patient discusses the procedure with the practitioner.

The locking procedure is anti-clockwise, so I inserted the tension wrench to the left and pushed down. Handy, since I’m also right handed. Not too much pressure, but just enough. The same that you would apply to a key in a nicely working lock. 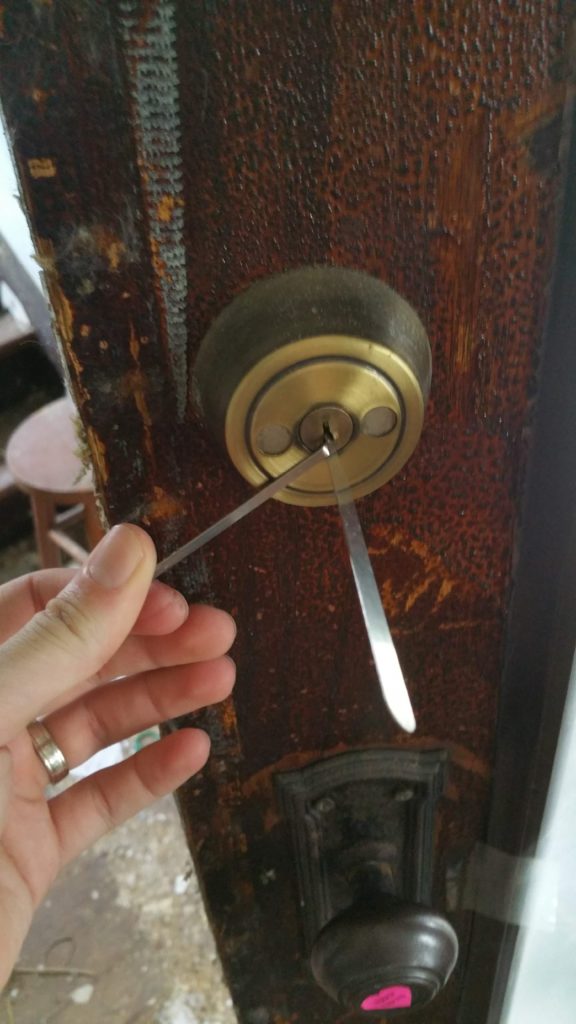 Now the simple matter of slapping the pick around up and down inside the tumbler. The easy part is pushing the pins up and feeling the ‘click’ of setting them to the shear line. 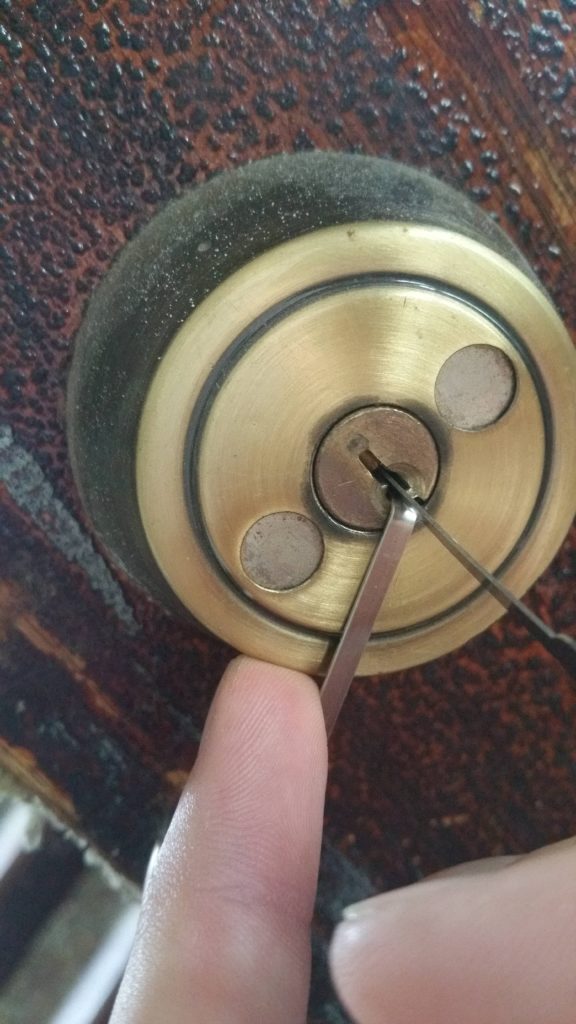 The HARD part is trying to remember which pins you already set, and figuring out how many pins are in your lock. I fiddled around with this for about 20 minutes before I decided to take a break and try a practice lock.

One of the locks located in the hoard was seized up, either because it is broken, or the key doesn’t match. 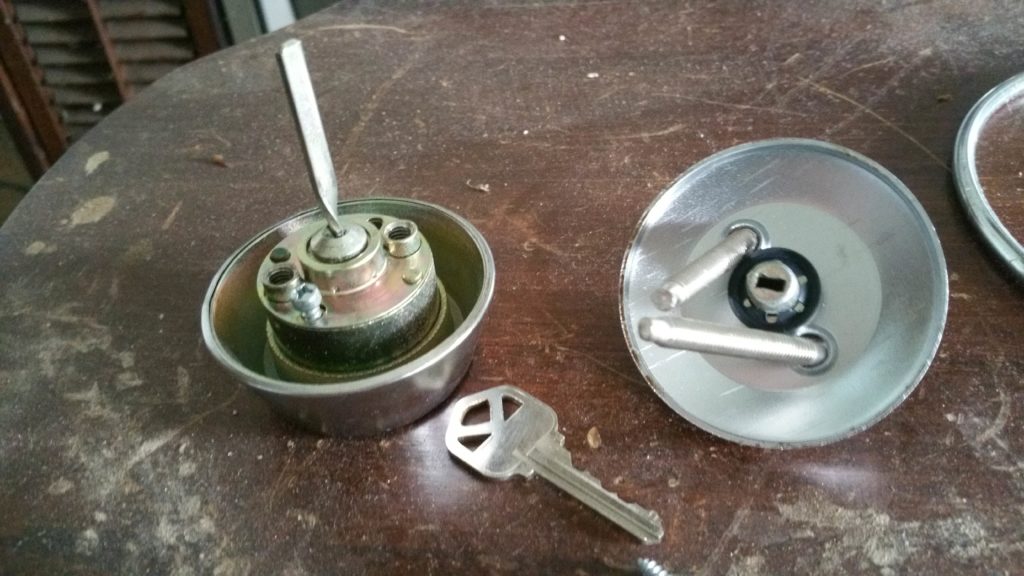 Note the ever so slight twist on the flat tail piece, which actuates the bolt. I’m guessing broken from over-torquing.

The screws holding in the cylinder I removed, and pulled out just the pin/sleeve/plug assembly.

I must have fiddled around with this lock for another 20 minutes before Hillary came by and asked what the @%&# I was doing wasting daylight.

I wouldn’t call it a waste.

But I did think that I was getting nowhere fast.

So we busted out the handyman’s secret weapon. Not that one, the other one. 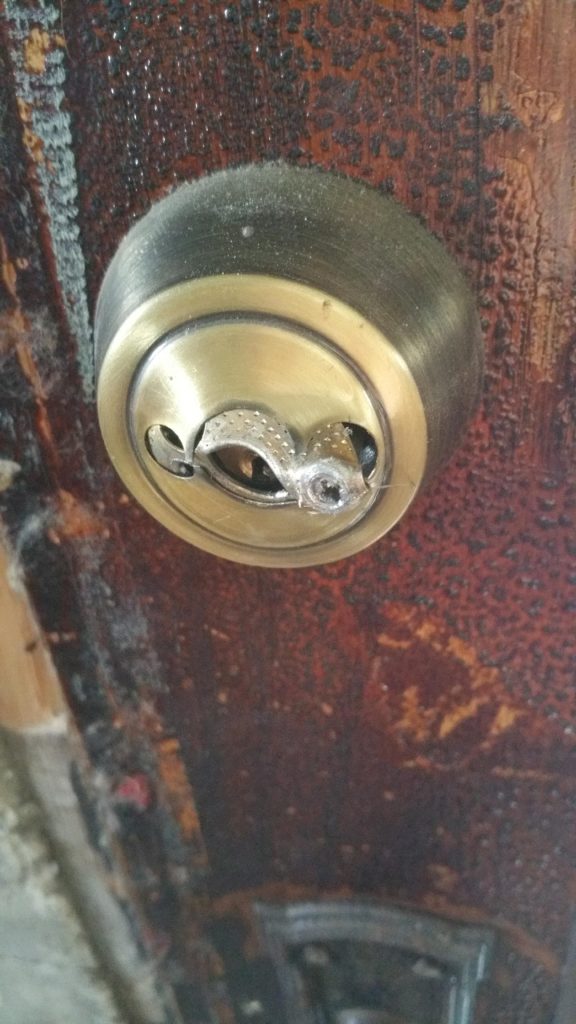 Rather than continue to attempt working on a lock that I know is rusted on one side, and therefore very likely seized, I drilled out access holes for me to reach the screw heads holding the two halves of the lock together around the door.

I’m not planning on saving this lock anyway. The keys are long gone. Once the hole was drilled enough to fit a screwdriver tip, the screw pushed the plate out the rest of the way for me. 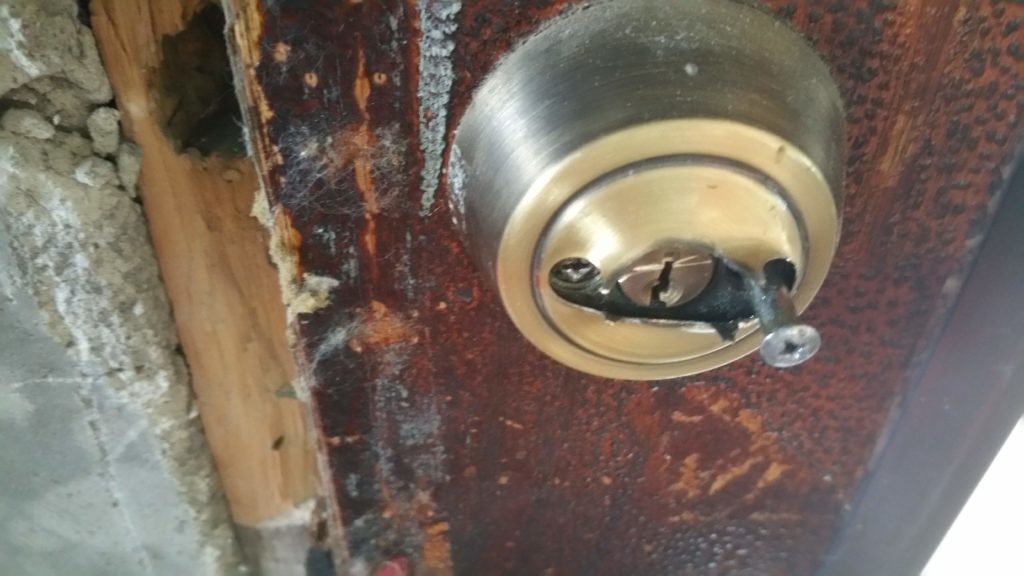 Good thing he was an organ donor.

I prised the protective plate out from the face of the lock and continued disassembly.

The hoard giveth bounty, and an entire new lockset was found, which was also keyed on both sides. 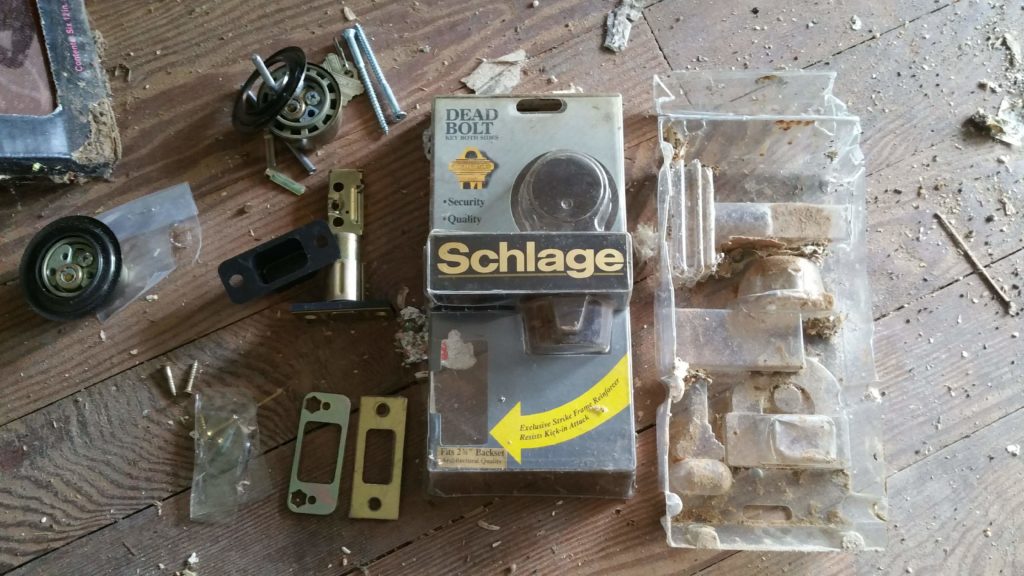 So, all locked up?

Disadvantageously, this lockset has a different ‘backset’ from the old lock, which is the distance from the center of the cylinder to the edge of the door. No big deal, we can drill out the door a bit further to accommodate, and it comes with little shields to hide the rest of the hole.

But, this lock is the biggest PITA lock I’ve ever had to install. There are tiny little pins that are detached from the locks themselves, so you have to gently assemble 4 or 5 parts together on each half, and then press them together through the door, and hope they line up and don’t fall apart while you are holding them in there. And then you have to get a screwdriver and get that all sorted.

The most successful installation attempt had the interior lock working, but the exterior just spins and spins.

Which I guess is one security feature they didn’t advertise.

Disregarding the lock, the jamb is still busted, so the deadbolt has nothing to go into, even if it did work from the outside. I guess we press on with the day’s work, a little wiser for the journey.