The day you’ve been waiting for has arrived.

We extract and open the refrigerator in our hoard. By my reckoning, it’s been sealed up without power for around 10 years. This is about to be our nastiest cleanup to date. 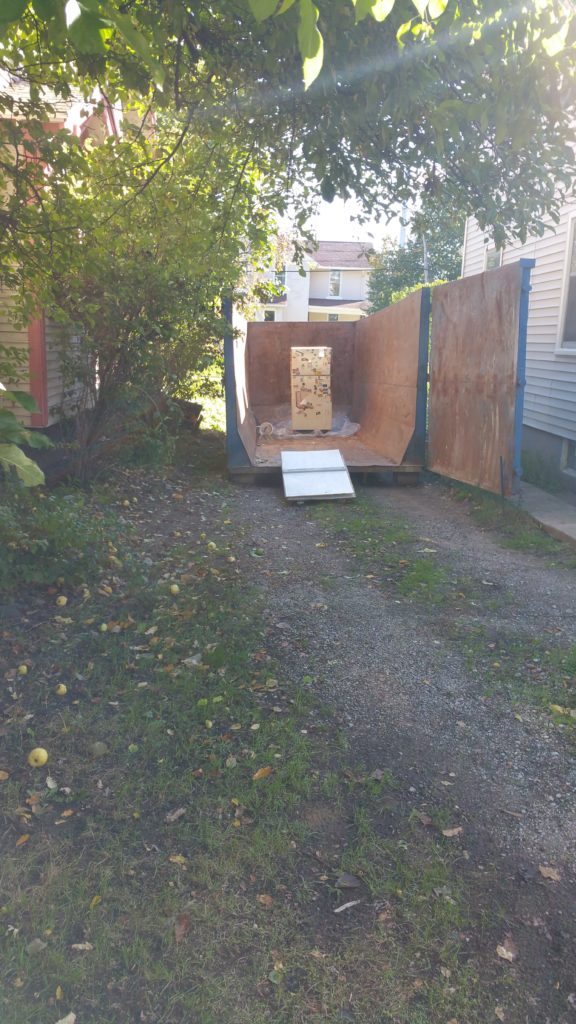 Open it? Hold up pardner. We have to get out there first. My two burly cohorts and I decided that the fridge had to be the first thing to go into our fourth dumpster, so that we could pile things all around it while it stood upright. So, it was the first step of the day.

I knew that the doors could not open until the fridge got outside. So we picked up a few inexpensive ratchet straps, just to make sure that the doors didn’t accidentally swing open, and cheap just in case they got totally disgusting somehow. 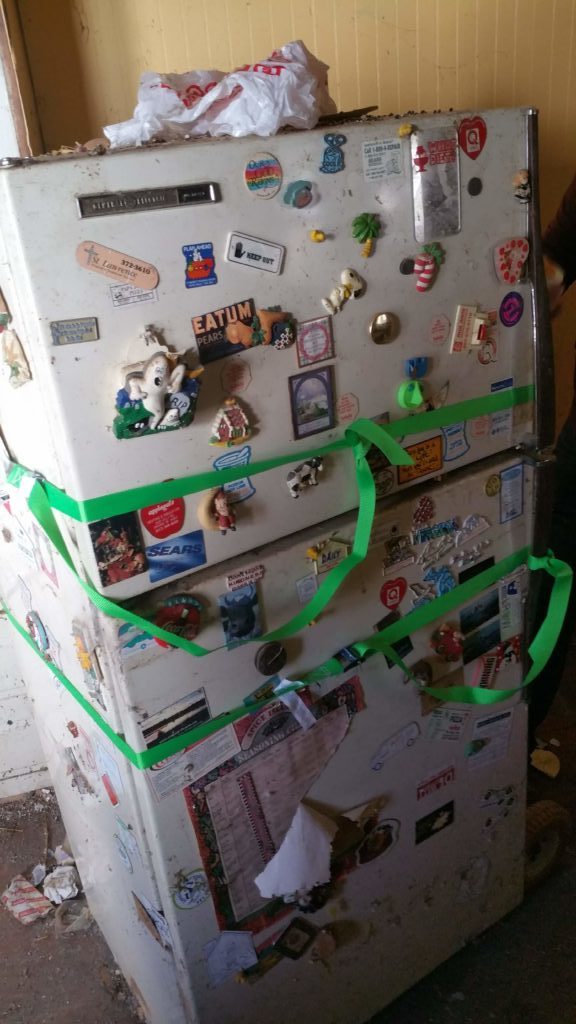 In the strait jacket

A dolly was fixed to the handle side for wheelability, which seemed to conflict with the actual wheels on the fridge. These minuscule wheels were removed and discarded.

Our original plan was to bring the fridge down the three short stairs to the basement landing and then out the side door, ’round the back, and into the swinging door of the empty dumpster. But, the turn on the landing was looking a little sketchy. There were three steps there at the side door, and three steps off the porch too, so we decided to take the long route. Since we were on wheels anyway.

We bumped the fridge down the threshold to the porch, and just kept gliding down the porch stairs. I happened at that point to notice a strange fluid seeping from the fridge door… 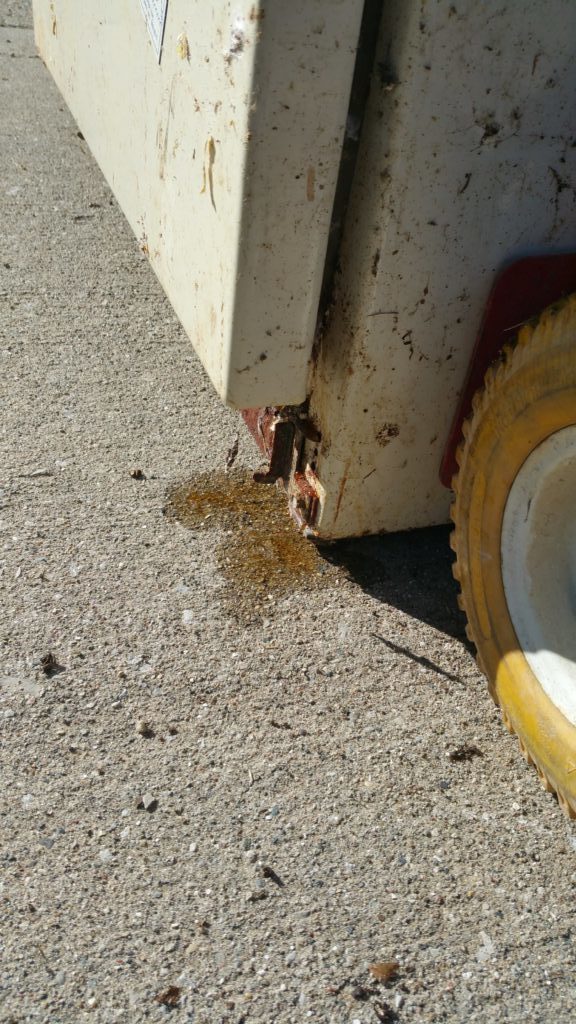 A portent of calamity to come?

This omen didn’t slow us down. But, can we take a minute to appreciate the magnets on this baby? 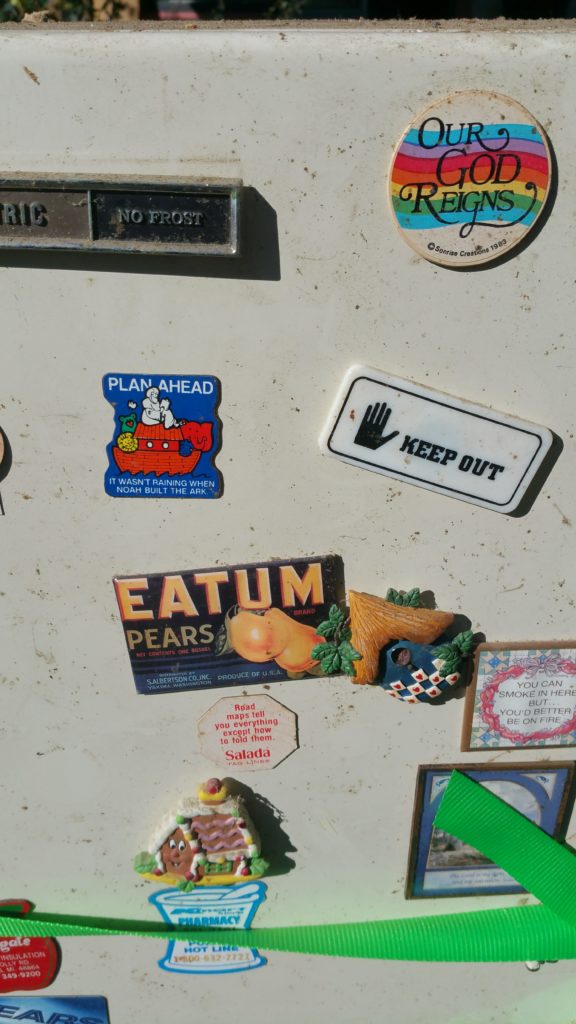 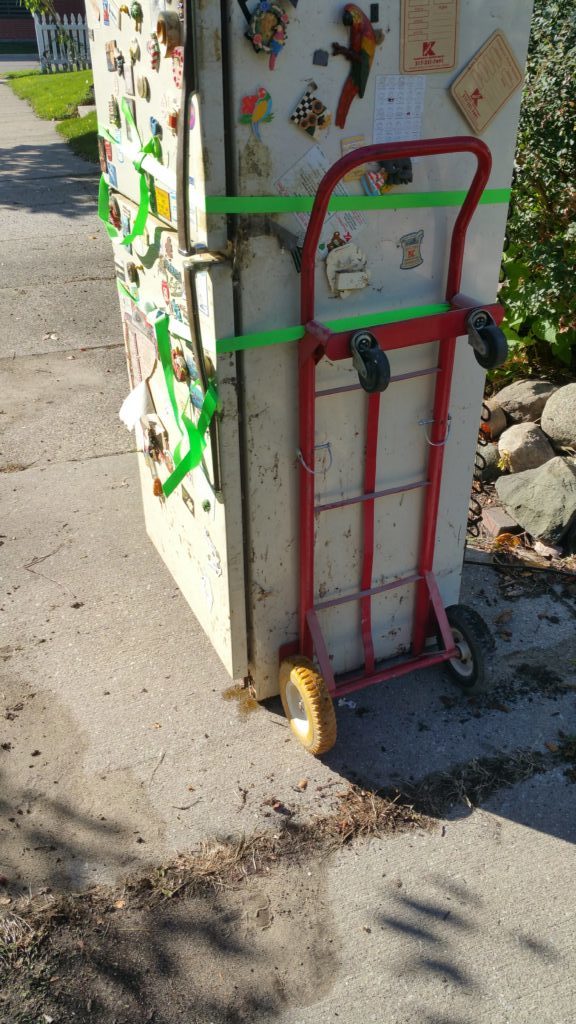 Even the side that was against the pantry cabinet was coated in magnets! But I digress.

Two routes presented themselves to us: a shortcut over an almost-too-narrow walkway to the rear of the dumpster, with high risk of slipping off, or a longer loop around through the side yard, which is rutted and uneven, with a high chance of tipping over. The latter option seemed comparably safer, since we could take it slow and control the top of the fridge.

A short minute of a rocky ride brought us to the edge of the dumpster. Skipping the ramp we hastily built, we let the edge of the fridge down onto it, and it entered its final destination. 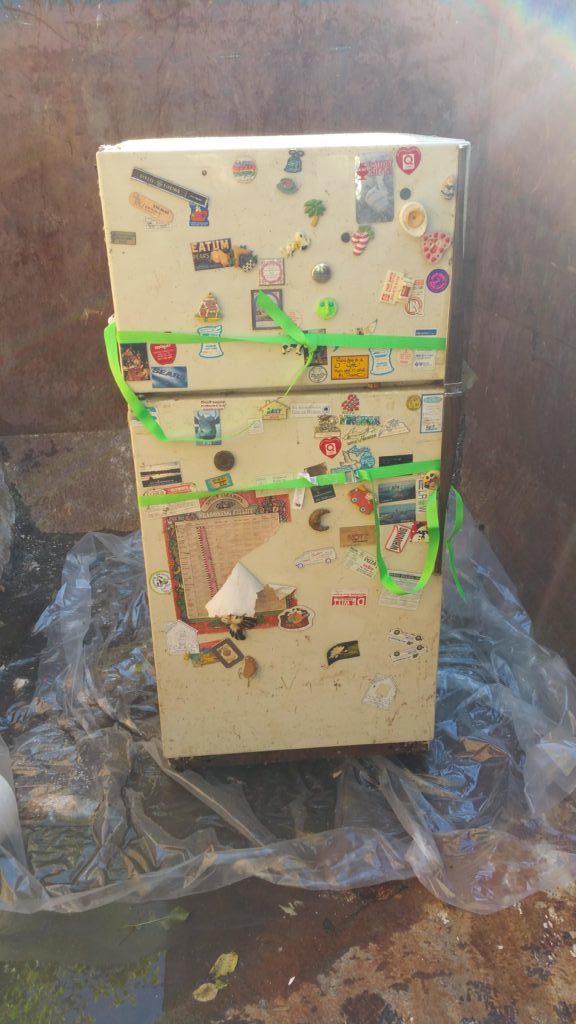 Are you physically prepared?

Because if you aren’t, I’m not sure why you even clicked on this post. You knew we had to open it. Why did you think we put plastic down?

Videos have no audio

For you non-video watchers, A handy photo of the contents: 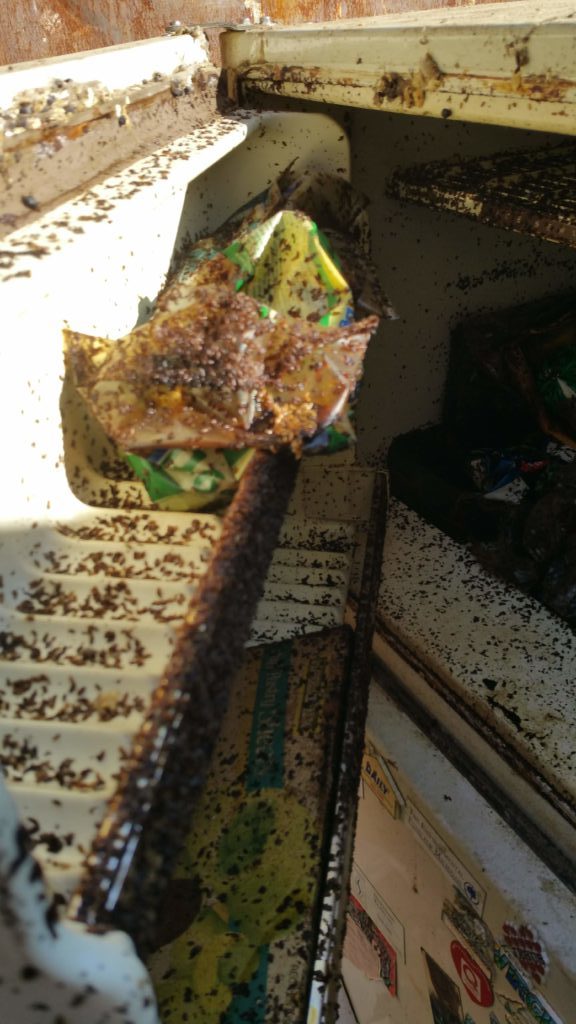 Yep, that’s what you think it is

Exactly what you expected. A pile of dried up maggots and nasty black mold. Except some of the maggots are alive. From some of the dates of the contents, the food is circa 2000. And, recall, the power has been off for nigh on 10 years.

I had to split this one into two parts. 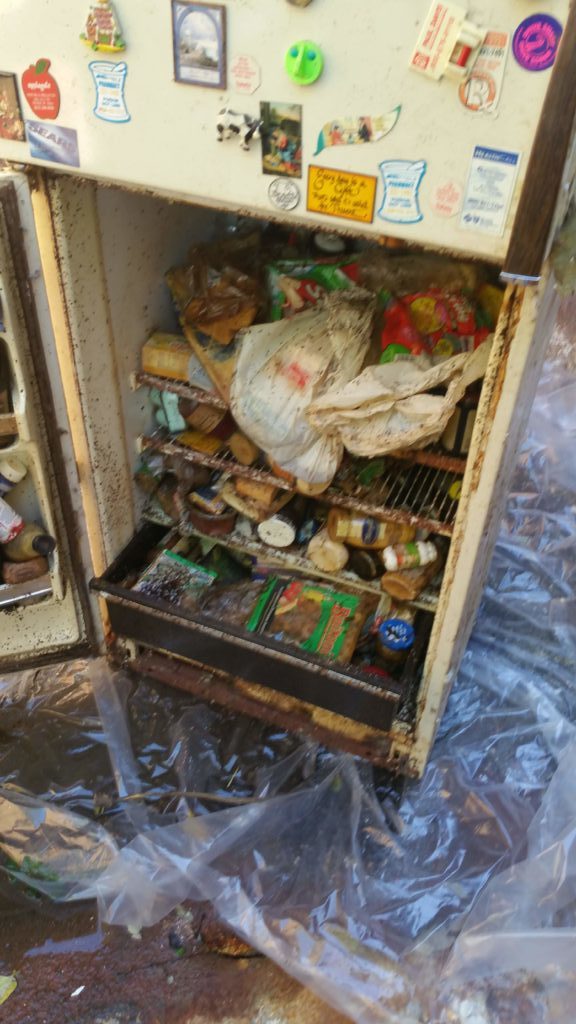 Yeah. I’m not even going to try to make excuses for this one. She abandoned food throughout her entire house in varying measure, and though I was secretly hoping that the fridge was an exception, I wasn’t surprised that it wasn’t.

The reason that I was so apprehensive at first was because of a story from my neighbor about a similar fridge incident of theirs.

At the time, the neighbor and his wife were looking to pick up a property by their house as a studio, so to move his audio recording business out of their basement and into its own space. They had checked out an adjacent house that had been vacant for some months and was up for sale. While they were inside taking a few measurements, someone in the party jokingly asked what was in the fridge and opened it up.

This was some six months after the power had been disabled, and the previous owners or tenants had left not packing in all of their belongings; particularly their refrigerated food. Out from the door of the fridge rolled a putrid sludge of rotten food and the organisms that were rotting the food. Chaos ensued. Luckily the fridge was right by a large sliding glass window, so it was easy for them to evacuate. Because they didn’t own the house yet, no one had responsibility to clean it up, so it sat.

Some weeks later, on an additional measuring and house evaluation errand, it was found that the subfloor was a bit squishy right where the fridge had been. A few quick bounces on one leg confirmed this, to the extent that the neighbor found that his leg had promptly gone right through the floor at that location, and was now dangling into the basement up to his hip.

My combined dread ratio was 70% fear of the contents of the fridge themselves, and 30% fear of what those contents could do to the house if they got out. But, thanks to planning and ratchet straps, all that is happily behind us. Now that the fridge is loaded out, we can start adding articles from the basement around it. We continue chronicling our finds there in the next installment…