Everyone could use a little help from their friends once in a while. And even though we said that we wanted to do as much of the cleanup and other work as possible ourselves, we are at a time crunch. The dumpster is getting picked up in four days, and its less than half full. We’re happy to have made great progress on the first room upstairs, but progress must continue.

So, despite our repeated warnings, some friends agreed to come help us chuck things into the bin. 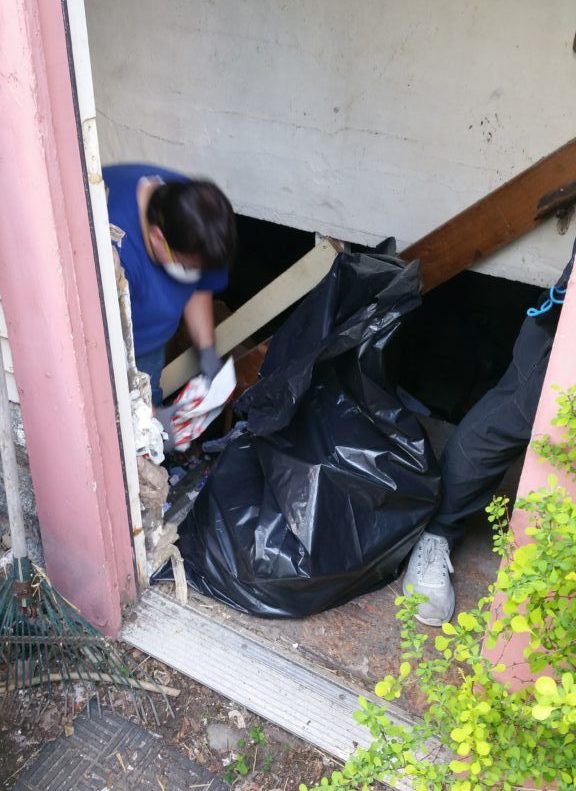 Dan clears the stairs to the basement. 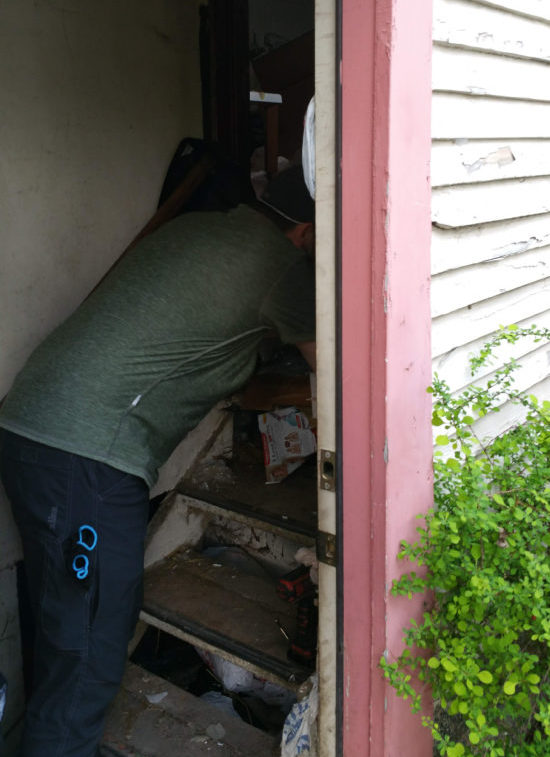 Jeff clears the stairs to the kitchen.

Beyond Hillary and myself, three friends came to help clear out the rest of the front bedroom on the second floor, the hallway on the second floor towards the remaining bedroom and bathroom, and the stairway into the basement, which was previously impassable. In total, we spent around 5 hours in the hoard for this round of cleanup. I had figured that it would be too warm to stay inside, what with the temperature reaching the mid-90s by midday, but the interior stayed suitably cool. Despite the smell, we also found respite by heading into the much cooler basement. 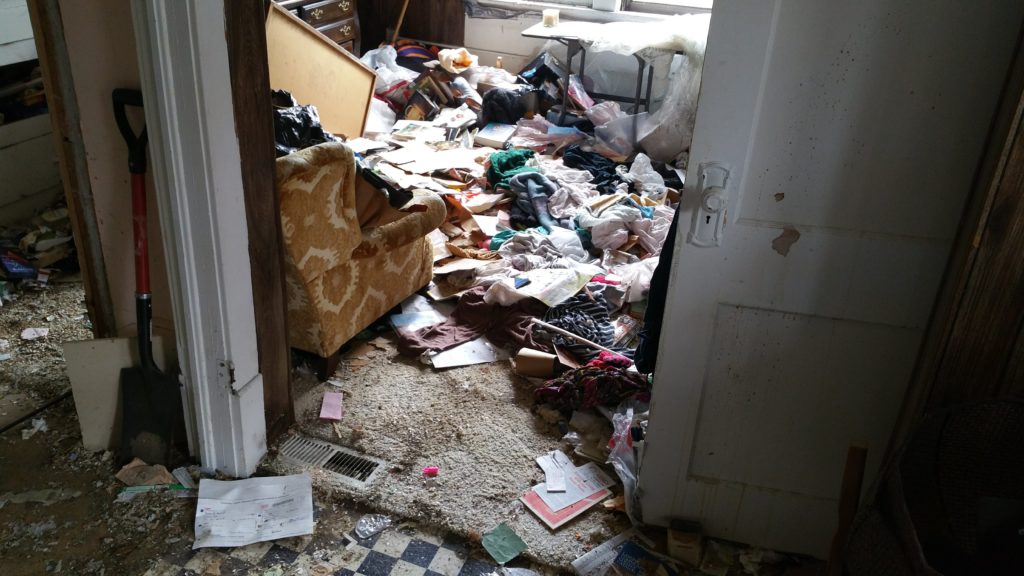 Just about where we left off the previous round, sans mattress and box spring. 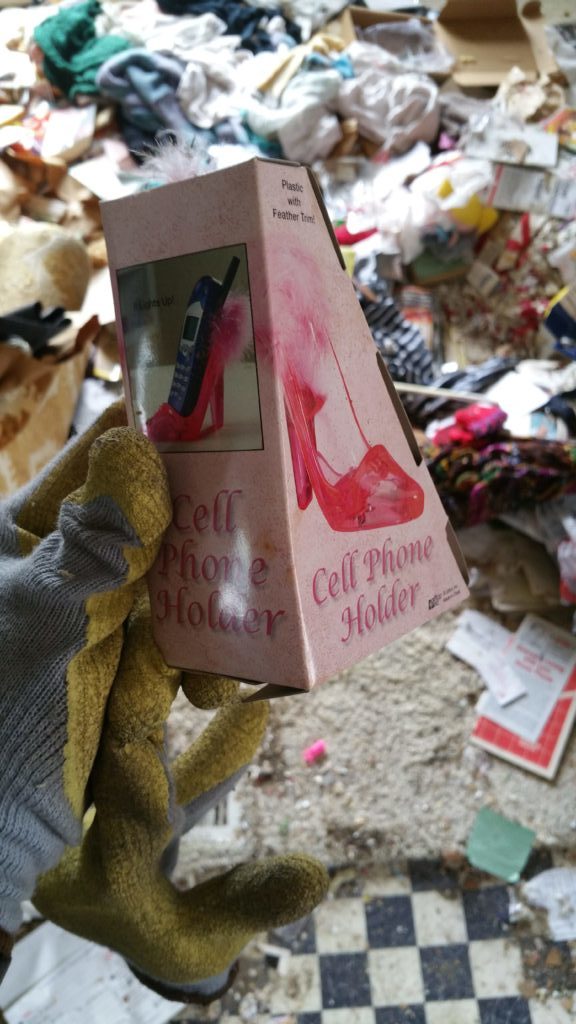 This probably belongs in the Babysitters Club books. 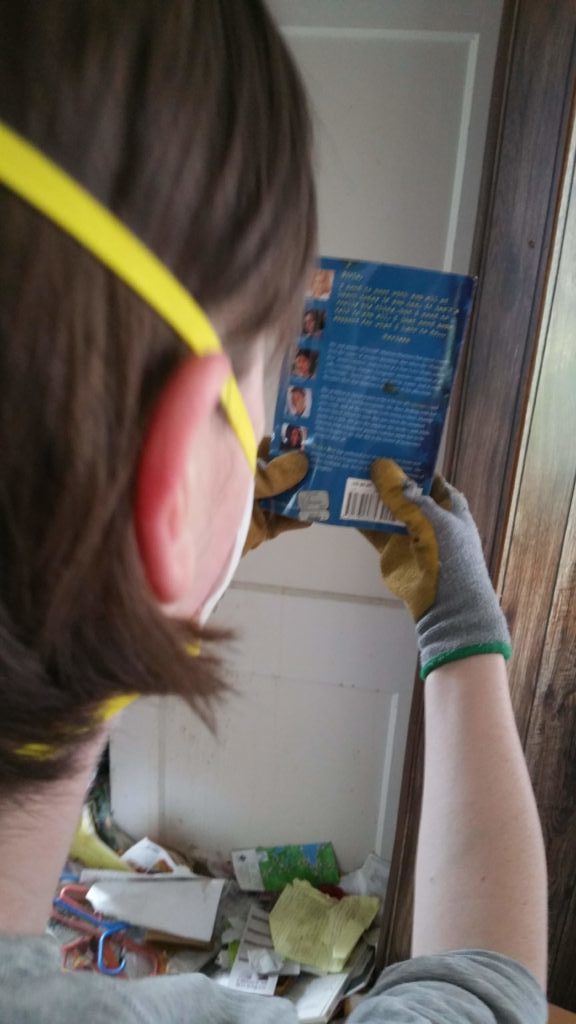 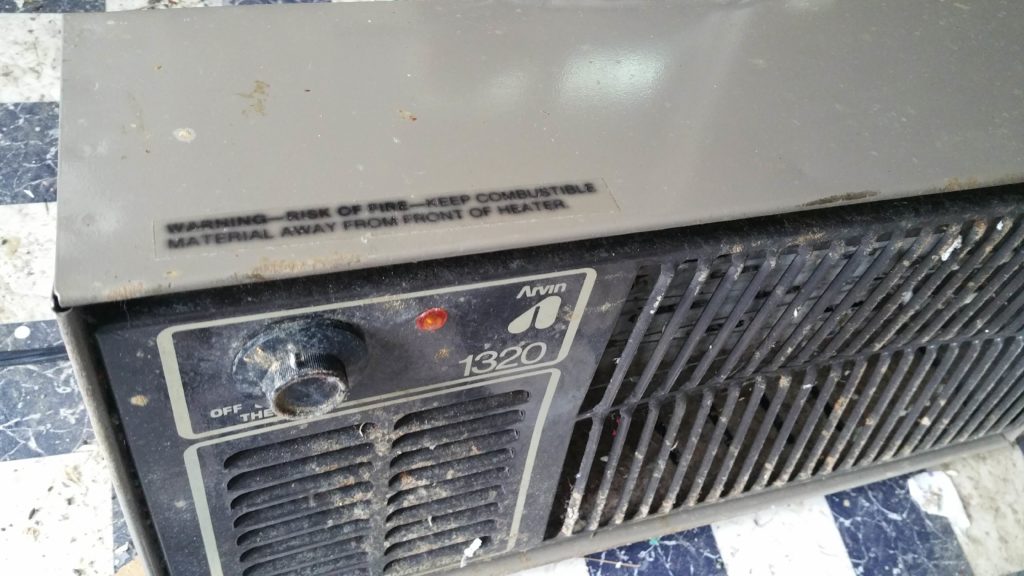 Me? Put combustible materials in front of a space heater? Luckily it was unplugged. 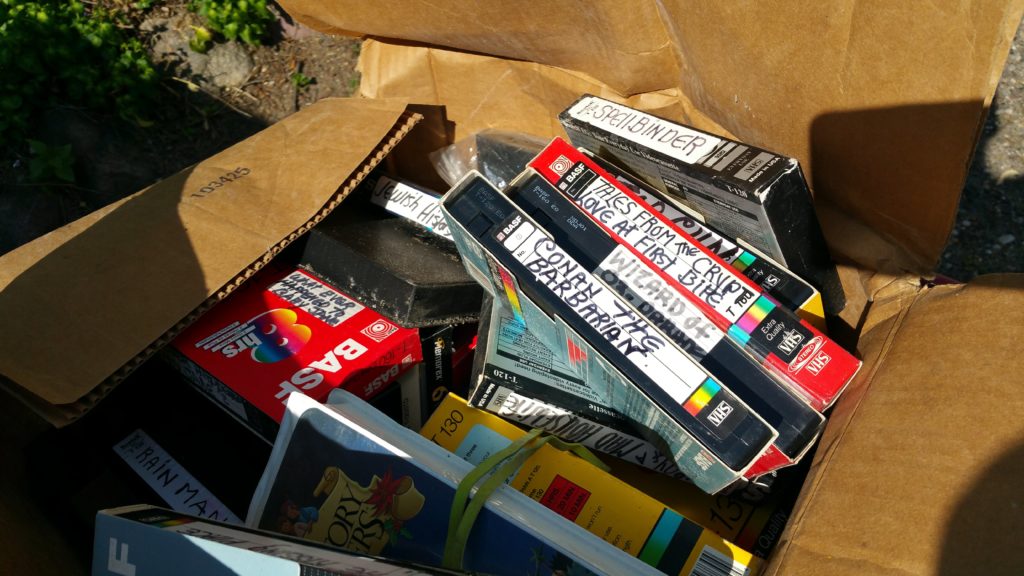 I really want to watch some of these, but im not sure what they would do to my VHS deck. (not pictured: twilight zone) 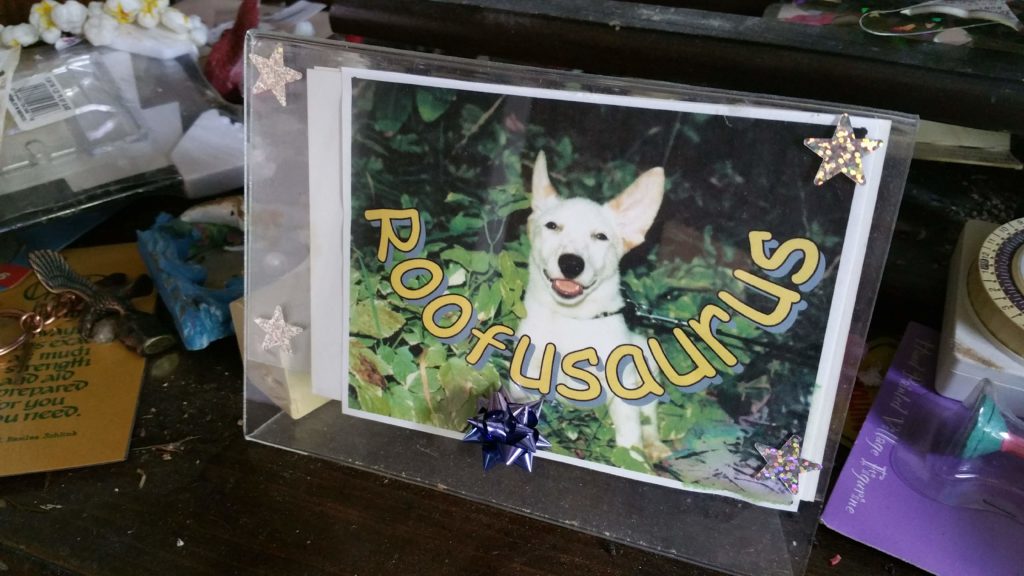 As we cleared out a path down the stairs into the basement, we got a slightly improved look at the large electric stove and oven stored there. 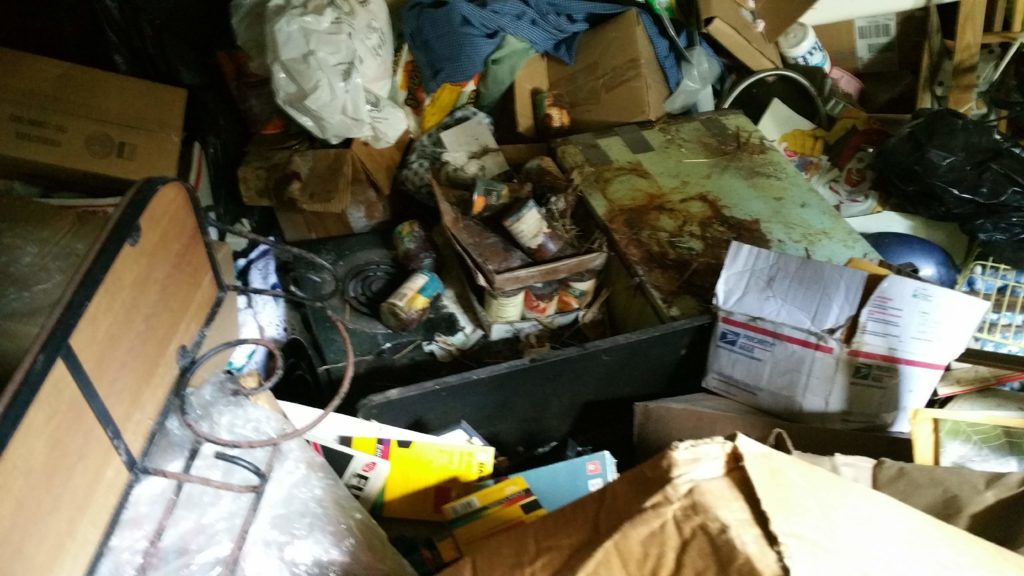 It seems to be extremely rusty, but that hasn’t stopped us before. Ideally it could eventually find a home upstairs in the kitchen. But, there are 20 yards of trash between the stove and its intended home… 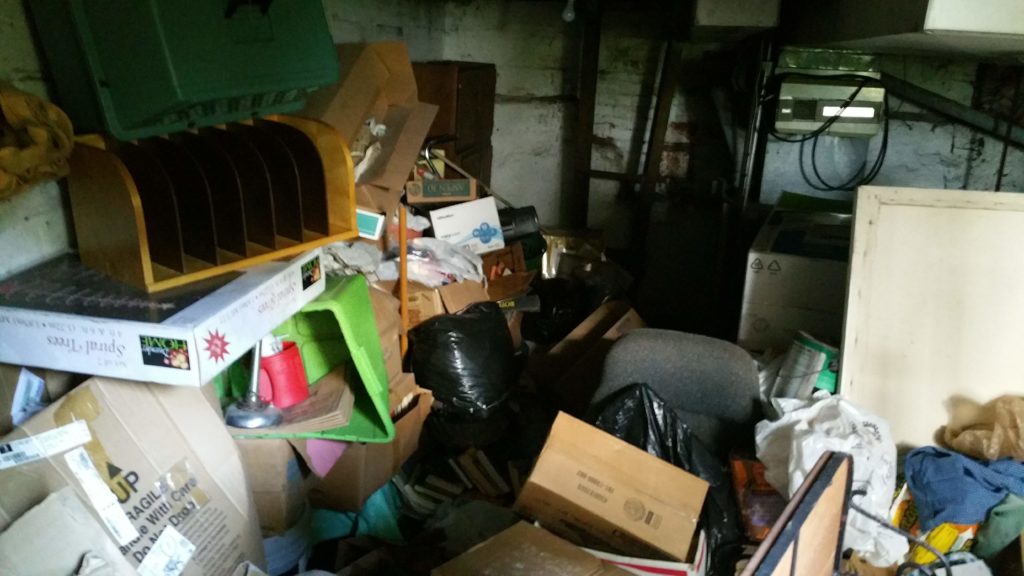 At the bottom of the stairs looking towards the furnace. 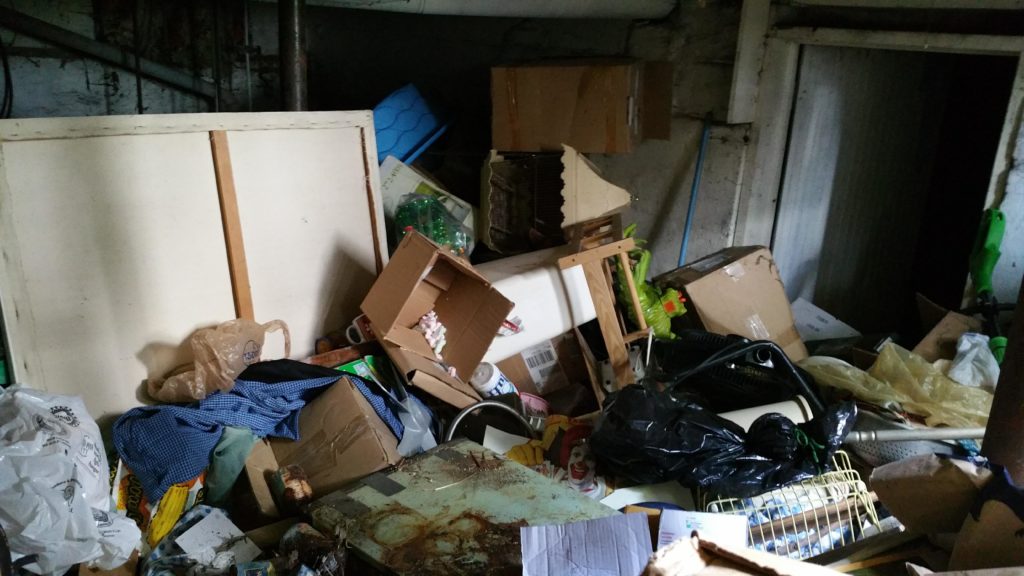 Turned 90 degrees and looking back under the kitchen.

We have more or less made it into every room in the house, but the basement is still an enigma. The only view I was able to get into the dark room pictured above is the gap between the floor of the kitchen and the first stair towards the side door. I didn’t happen to snap a picture, but I did see some wiring improvements (plastic coated romex) and a coin-operated washer and dryer.

I have no idea what lies at the opposite corner of the basement, and we may not know for some months.

As we cleared towards the closets, we noticed a bit of light coming in from the corner. 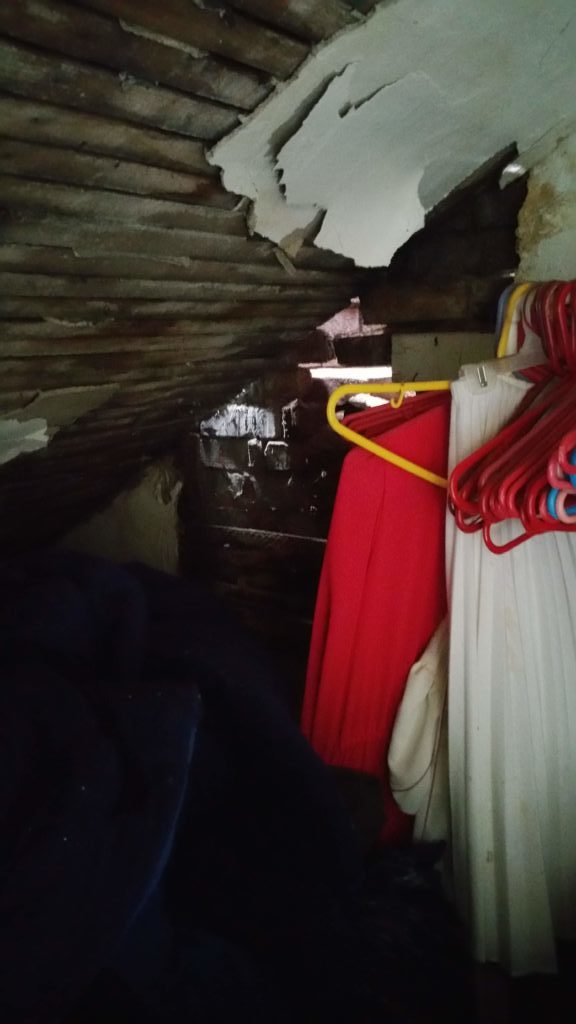 This is the interior face of the chimney, open to the outside air. The bricks have caved in from water damage and are blocking the passage of gasses out of the house, including those from the furnace. In a best case, this would have caused the furnace gasses to back up into the basement or out of the fireplace on the first floor, in addition to allowing water and woodland creatures to occupy the second floor.

I’m now thinking that this chimney may be related to why she had so many self-help medical books.

The chimney has a gap between the brick and the wood siding as well.

This adds concern to the state of the siding and affixment of the chimney to the house on top of concerns for the roof flashing. We already know that there are problems at the corners of the gable around the front bedroom, which caused some small caveins in the living room.

“I hope we don’t need to strip and redeck the roof,” he said foreshadowing-ly.

The Dumpster Is Done

Although we still have some time to fill the dumpster, this is likely the last work day before the dumpster is collected. It’s nearly filled from two and a half rooms, and other duties are pulling us away from continuing cleanup this weekend after today. 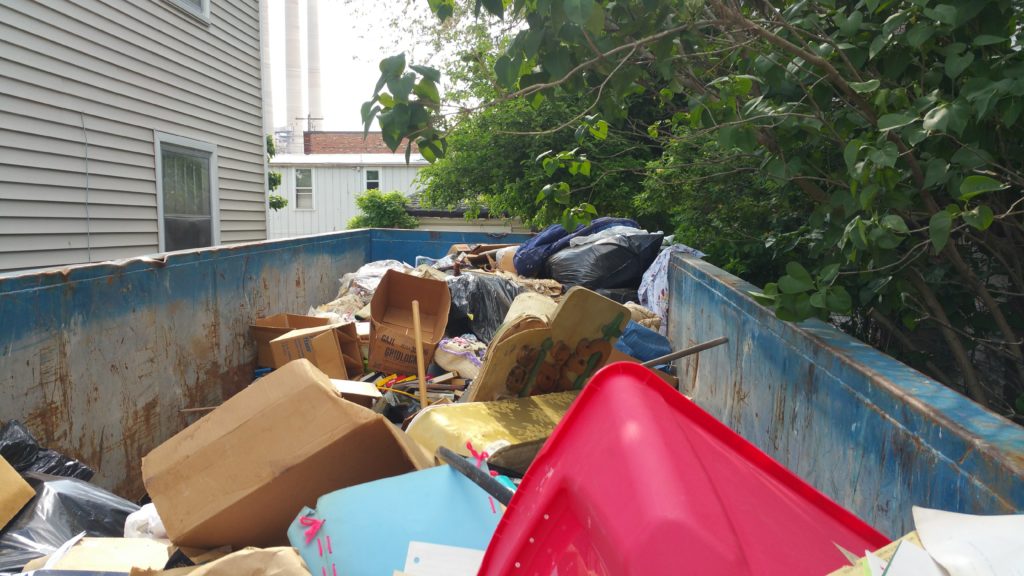 From this angle, there’s plenty of room for another room!

Once the dumpster is collected, we likely will not get another for a few more weeks. In that time we can keep working on the yard (which you see encroaching in the picture above), organize our finds upstairs, and try to extract some of the furniture which is in good enough condition to donate.

Next time, we’ll also have to remember to get a shorter dumpster…