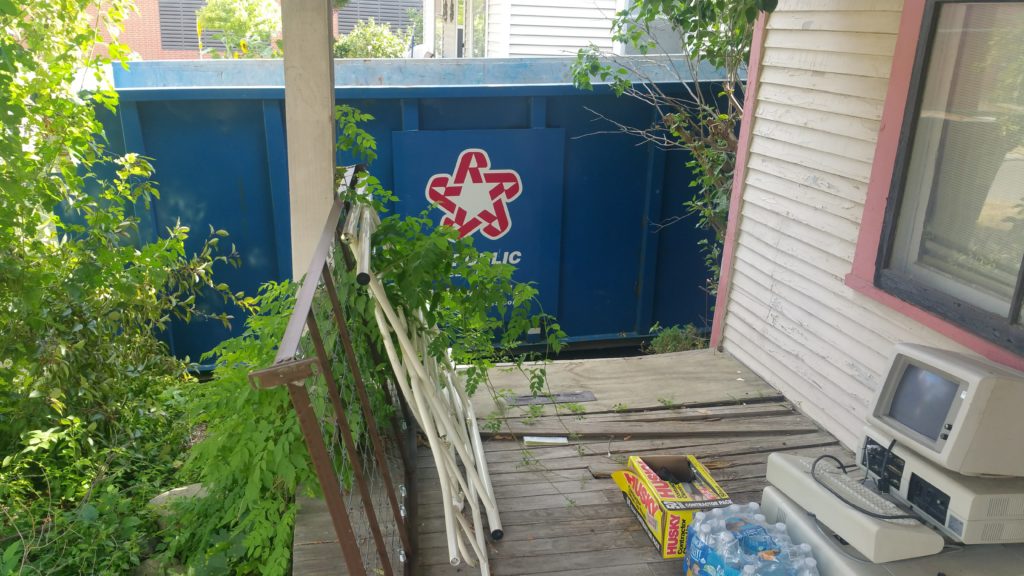 Though we ordered a 30 yard because it was shorter and easier to fill, a 40 yard was dropped off instead. Thanks. May as well make the most of it and fill it as high as we can! Here’s the first before shot. The full living room is ‘visible’ in the convex mirror. 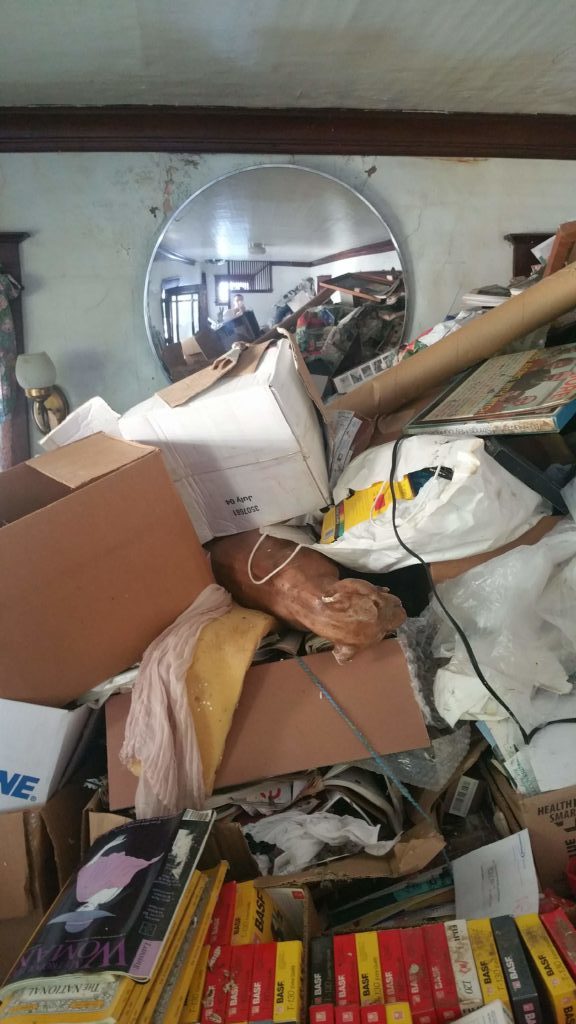 Next to me you see the open front door. Quite a beaut, but needs some help.

Because of the way the dumpster is situated in the driveway, its difficult to add items to it from the second floor this time. So, the living room is going to be the focus. We knew that there was a couch/loveseat in this room (we were climbing over them to get in and out), as well as at least one TV by the stairs. Through the removal process, we found another full console TV, as well as coffee tables. Unfortunately, these had a lesser effect on the volume of the pile than we hoped, because they too had trash underneath them. 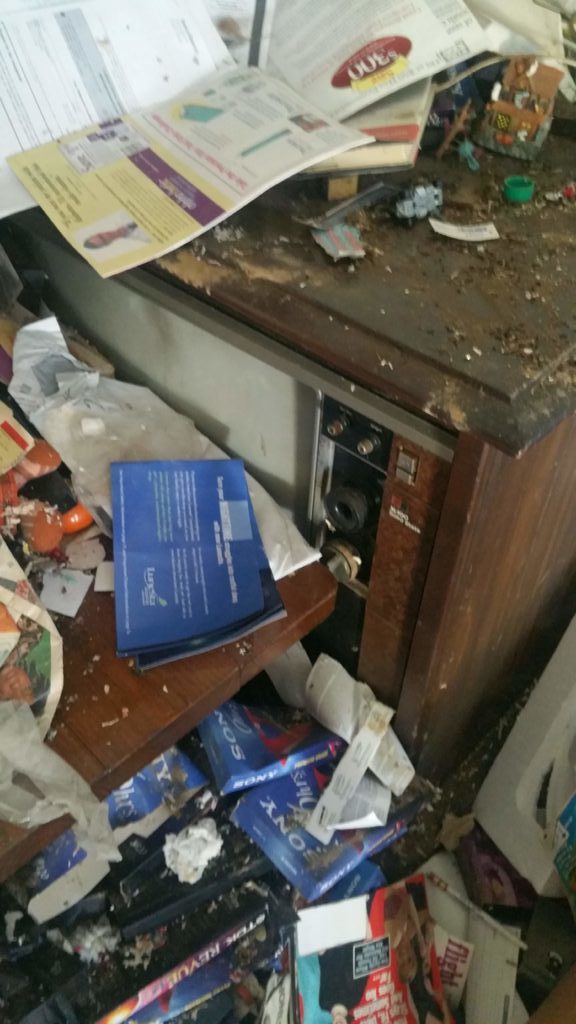 The first, and most obvious console TV 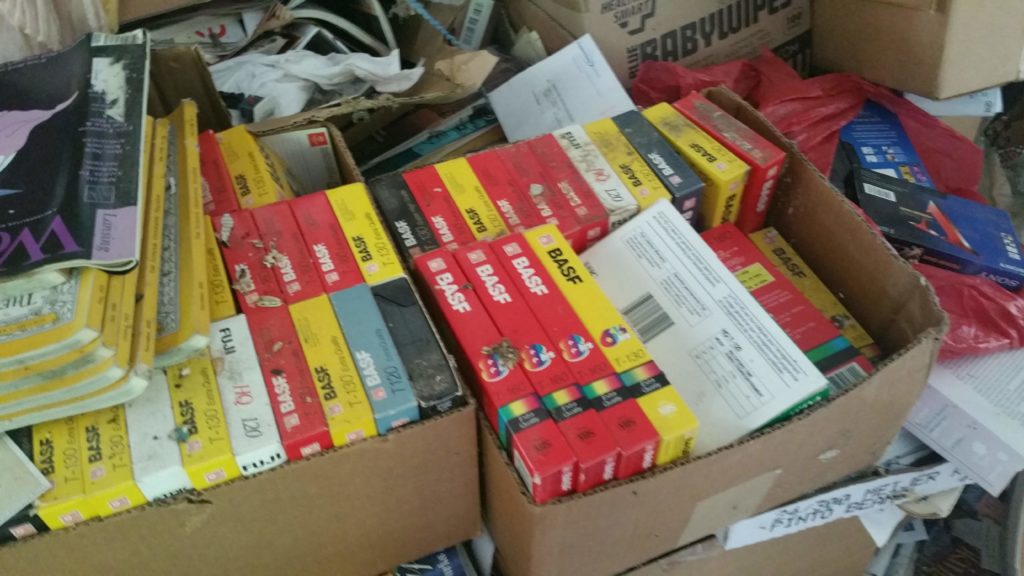 Most of these have no label. 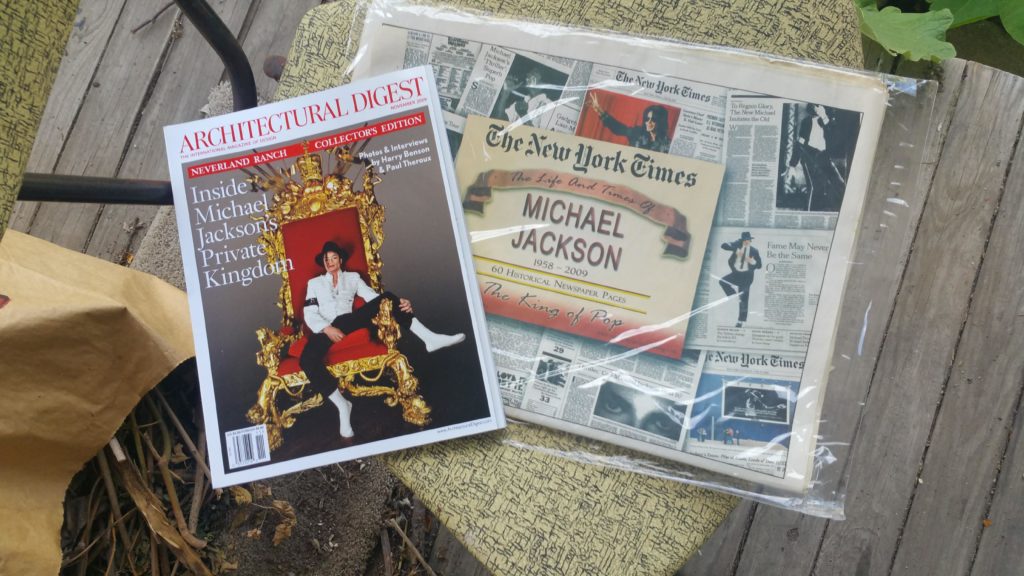 A small amount of MJ memorabilia.

The first statue of the day was much less broken than the original lion statue we found, which was porcelain and unfortunately tossed into the middle of the pile and crushed. This one is only mouse-eaten! 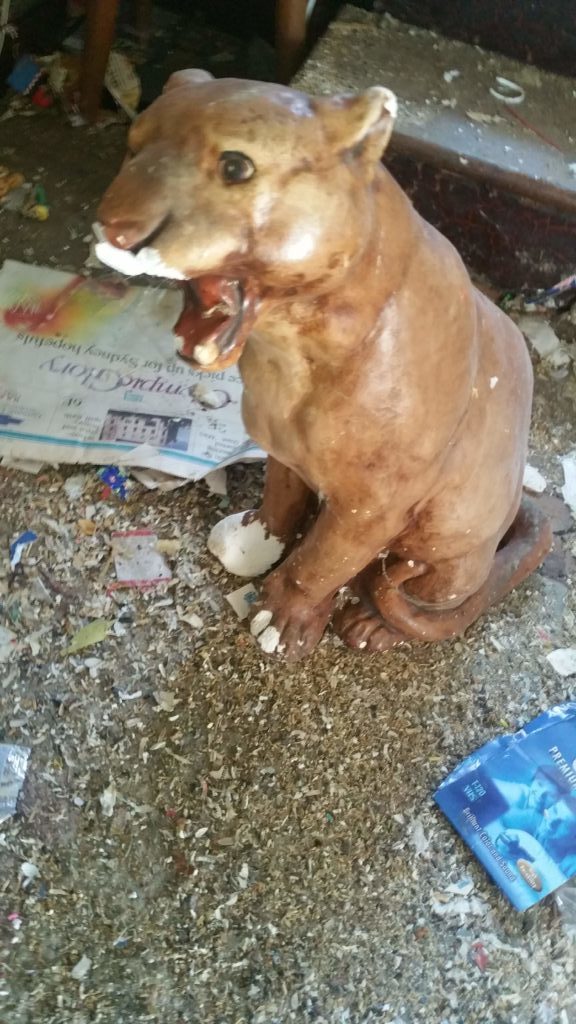 A bit of plaster touch-up and paint, and she should be back to full strength! 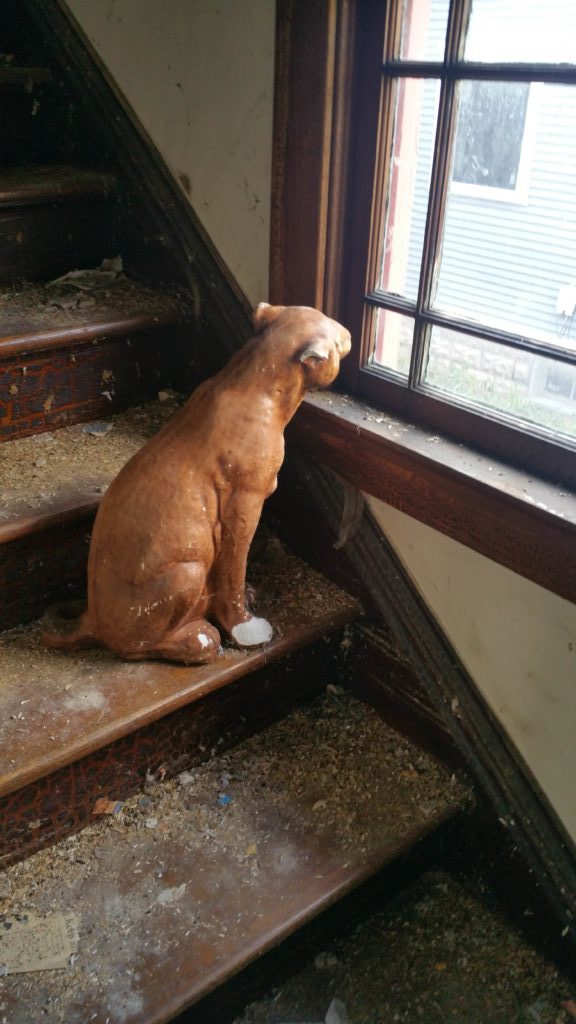 I gave her a nice view out of the window towards our house, to scare Hillary on her way upstairs.

The second statue was a bit further in, by the fireplace. Much less nibbled, and could be great in the garden. 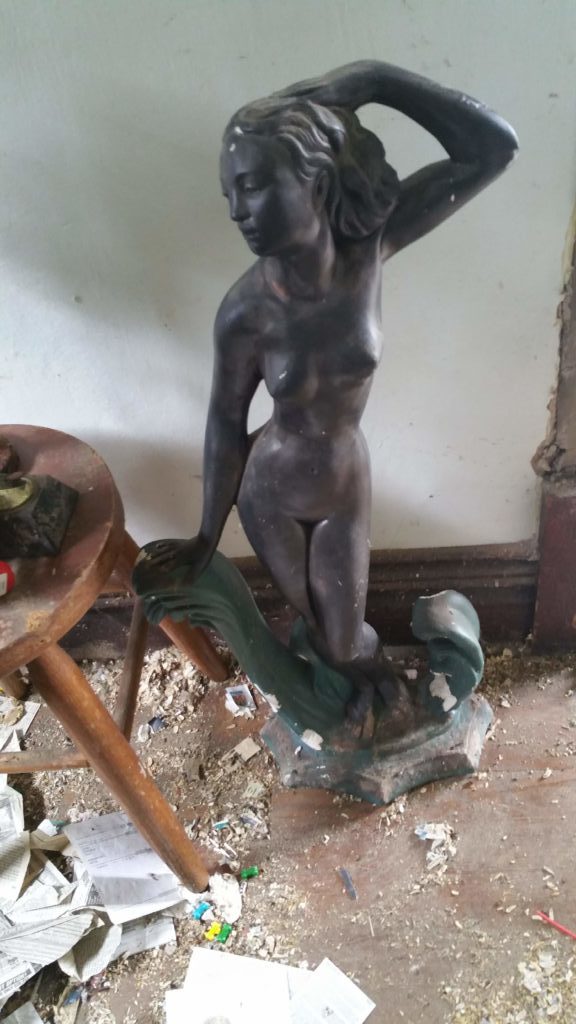 Moving boxes of trash out to the dumpster wasn’t too bad once the first coffee table got out, and we could use it as a step stool into the dumpster. The piles consist mostly of magazines and other papers and trash from around 1996. Here’s the next full view progress shot after an hour or two: 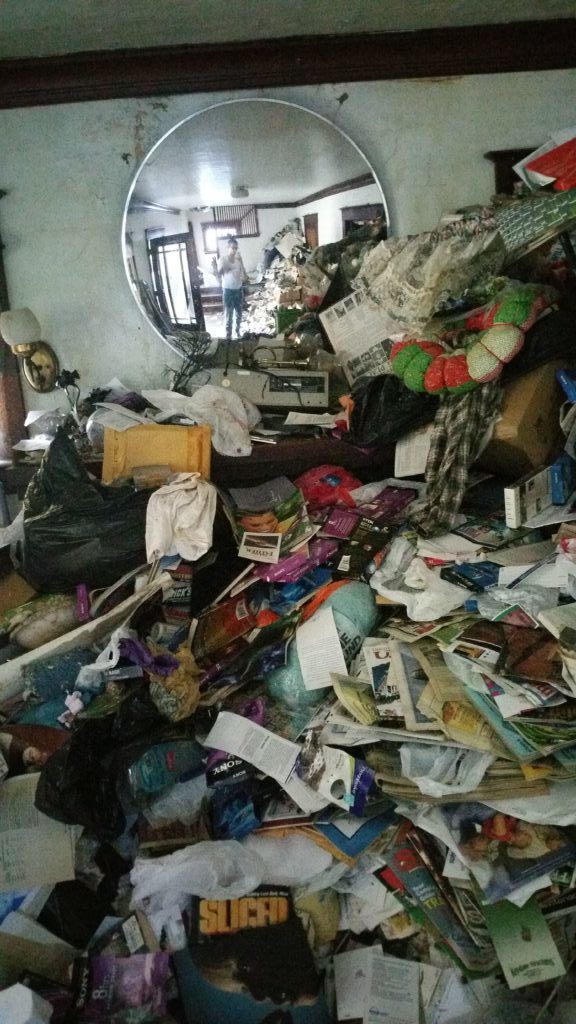 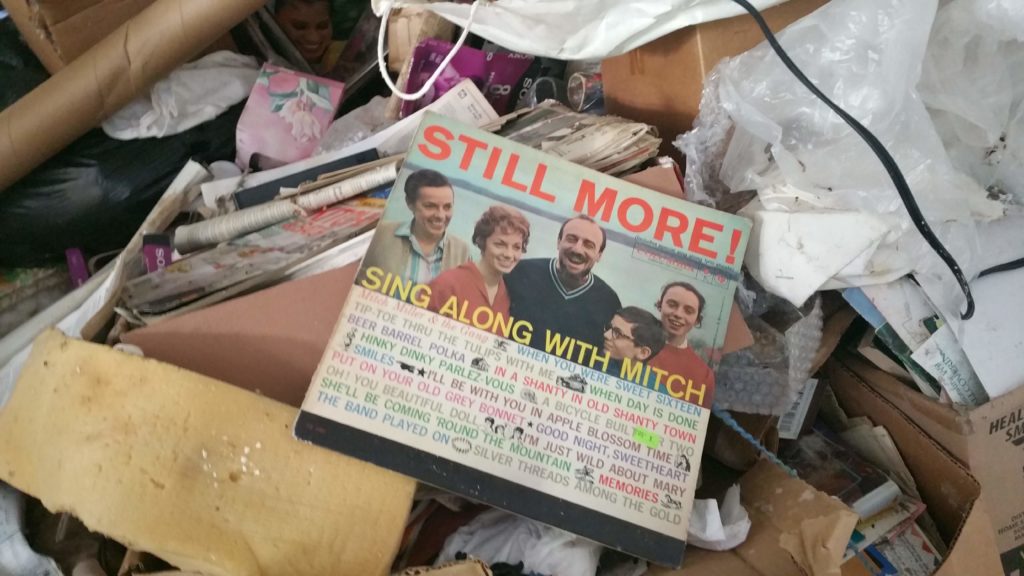 And if you call now we’ll triple your order!

With the help of a few friends (who absolutely had to see the inside for themselves), we cleared away further from the front of the house, and were able to extract the loveseat. This revealed the windows from the interior: 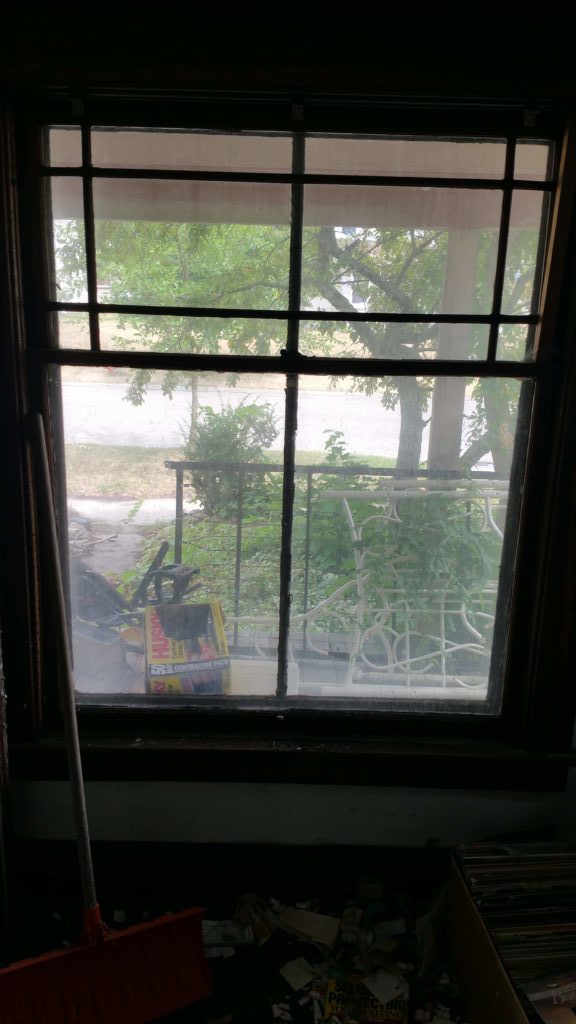 The vertical line is only on the storm window; I’m considering changing it out for a full pane of plexiglass for a wider view. 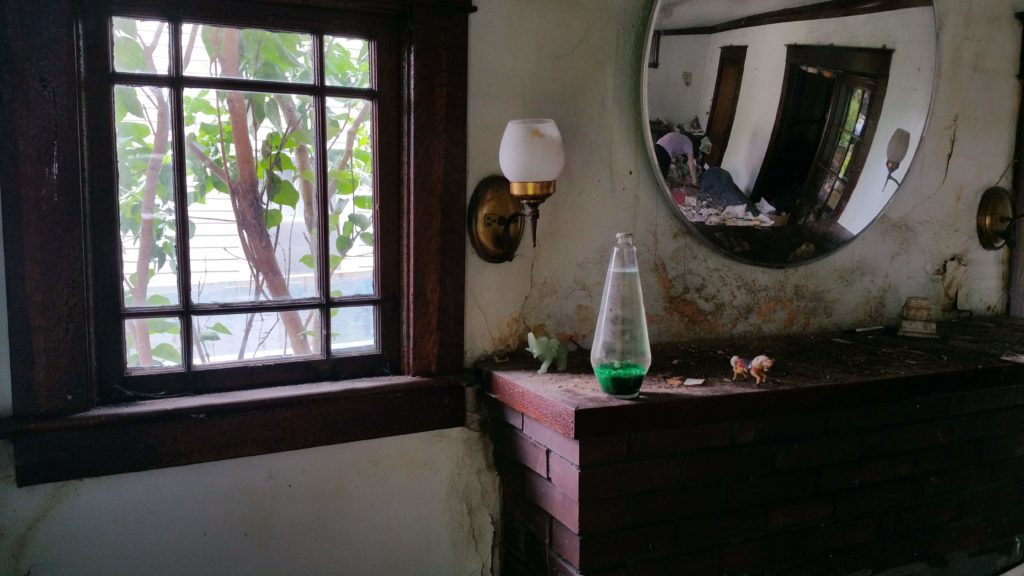 All of the windows were well protected from the hoard by a duct-taped sheet of plastic (not pictured). It’s pretty, but the lilac outside the window has to go.

As you can see, the fireplace is not in the best of shape. The bricks are separated from the plaster, and the exterior chimney also needs severe joint repair. 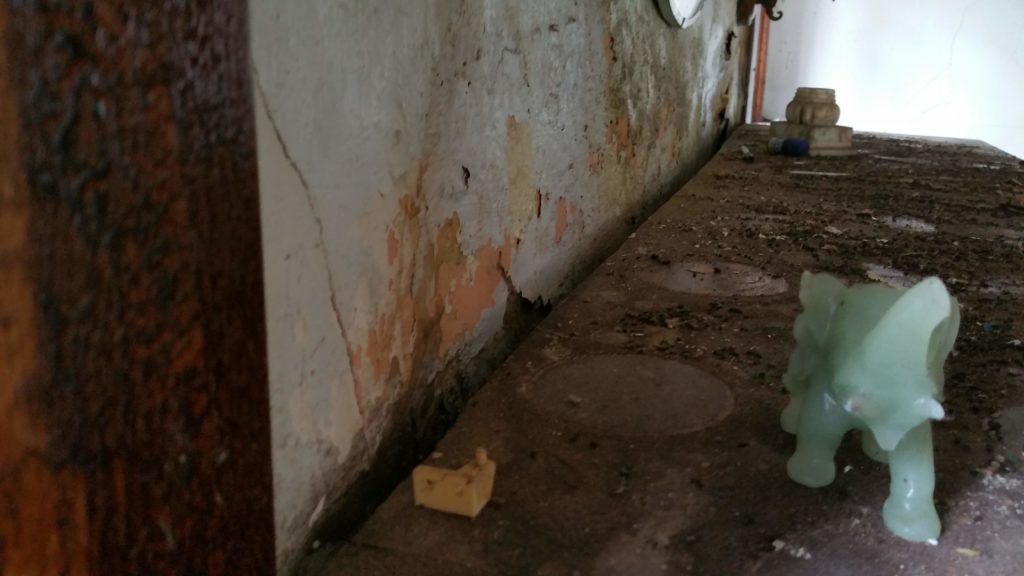 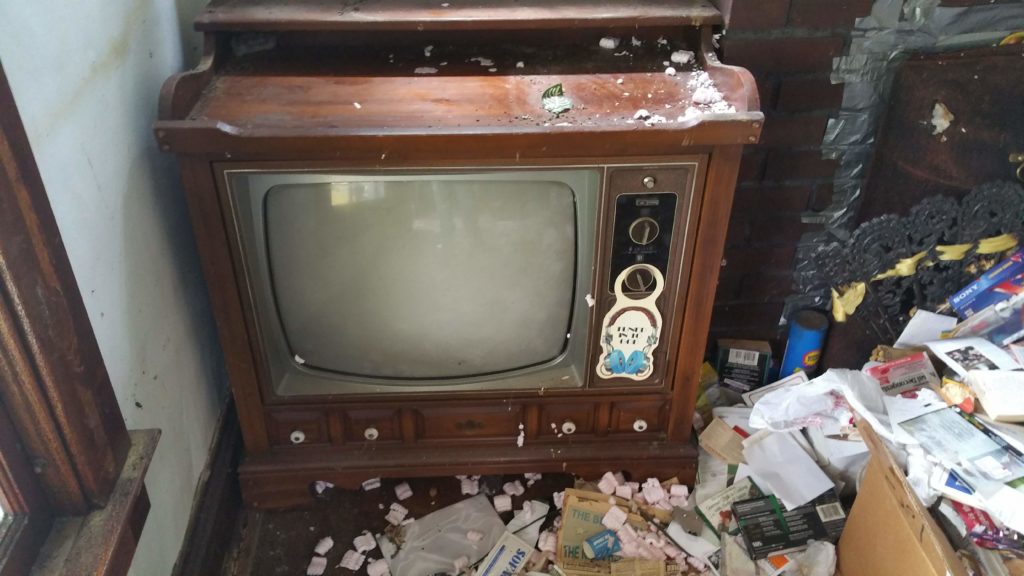 No indicating marks other than ‘Zenith Solid State’. Possibly a Chromacolor; stay tuned to find out!

Extracting the second coffee table and the full couch revealed the fact that the old owner liked to take her meals in the main room while watching (and likely taping) her favorite shows. Not being bothered to take the trash back to the kitchen, empty tissue boxes were leveraged to store the inedible remnants of chicken dinners past.

It was deemed that this find was not photo worthy. 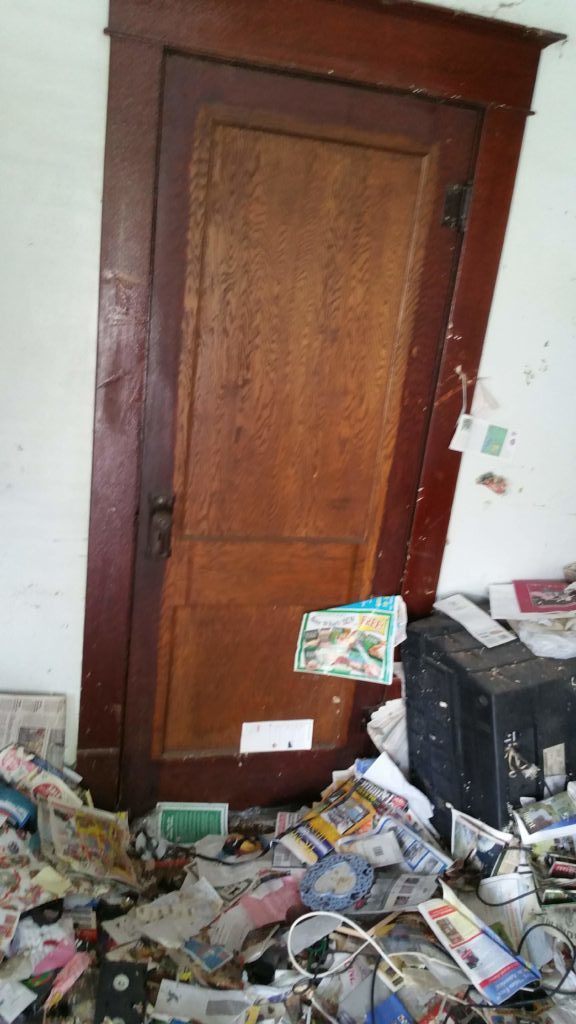 What’s the over/under on VHS tapes?

After the final sprint until we were too tired and hungry to go on, we were left with the following extremely satisfying state: 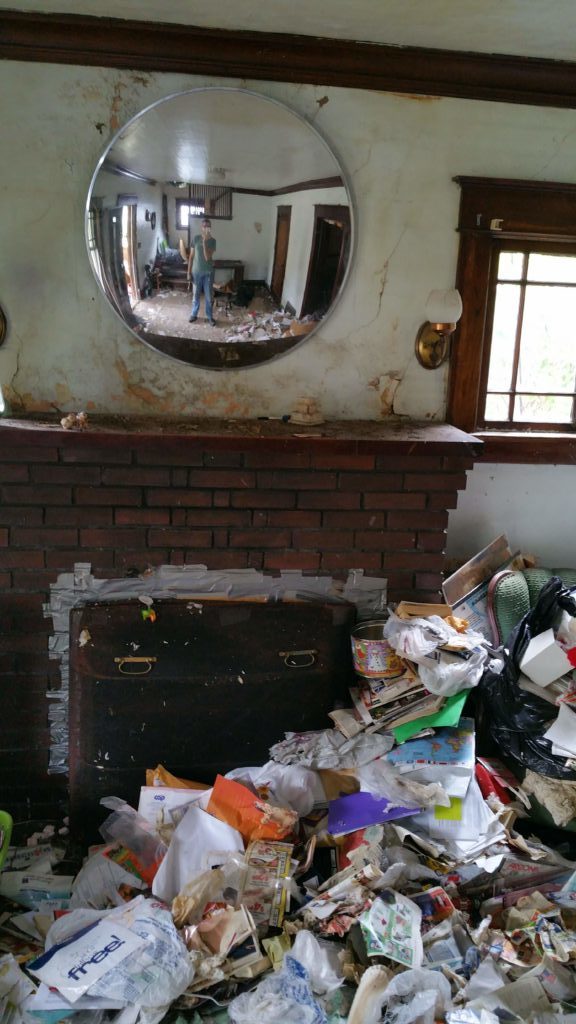 Even the fireplace is taped up. Likely to keep the leaks out from the upstairs closet. 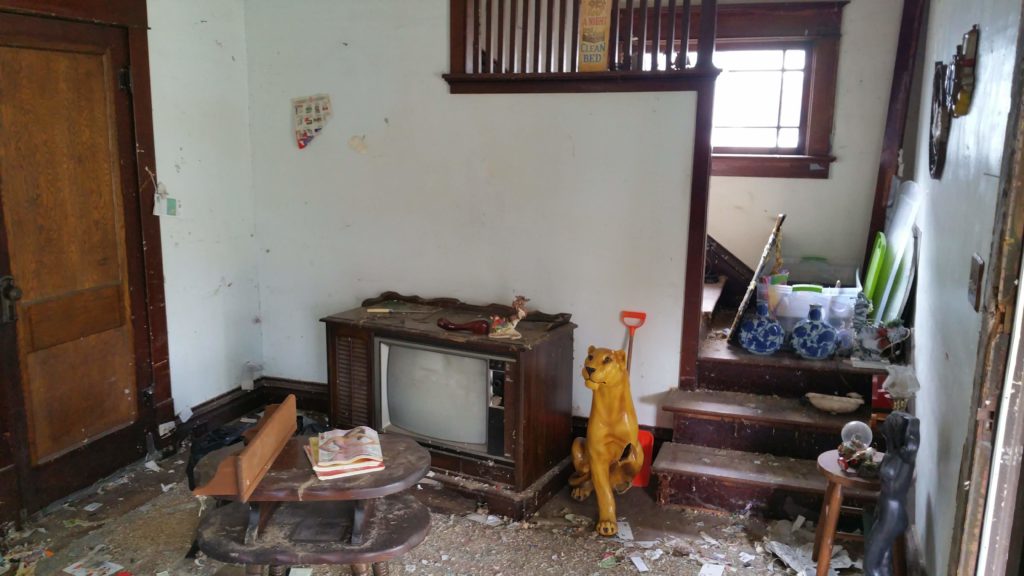 You can see the original statue we located, crushed and missing two legs and a tail. Perhaps it’s head could be reused? The paper on the wall is a ‘high water mark’. 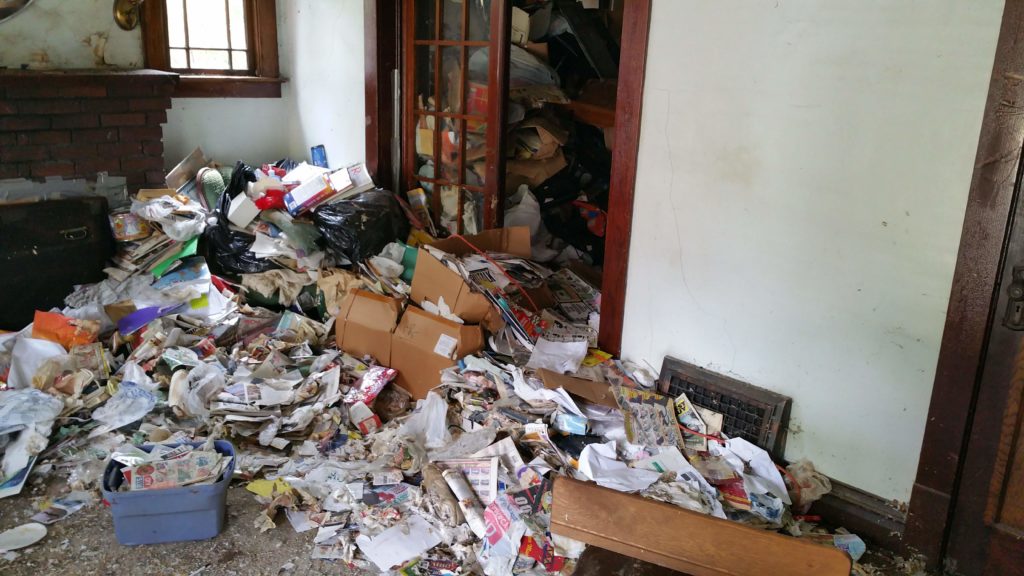 Only a small bit of shoveling remains!

The furniture luckily fills up the dumpster quite a bit, so we feel accomplished in that the dumpster is very full, but there is still plenty of space. Looks like we have another work day coming up this week to get past the pocket doors into the dining room…