Two weeks of 90 degree temps in Michigan, coupled with a lack of electricity (and therefore AC or lights) in the hoard, means that there is no chance of getting anything cleared out of the sweltering mess. Even outside, it was too hot to cut up brush or take down new trees. But, these yard tasks were held up by another issue: poison ivy.

No, unfortunately not the villain with the red hair. 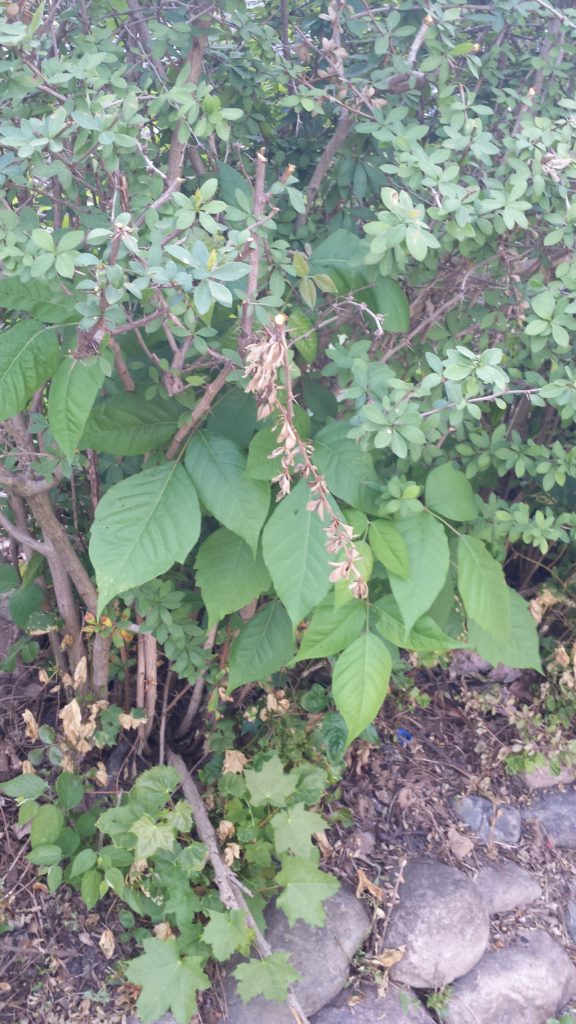 Poison ivy in the hoard yard, intertwined with a thorny bush. Best of both worlds.

The most frequent question we get when we tell people about our vicious vines is, “I don’t think I have ever seen any, what does it look like?” To which, I immediately respond by moving no more than 10 feet from where I stand and pointing out a small clump of it. The stuff is EVERYWHERE. 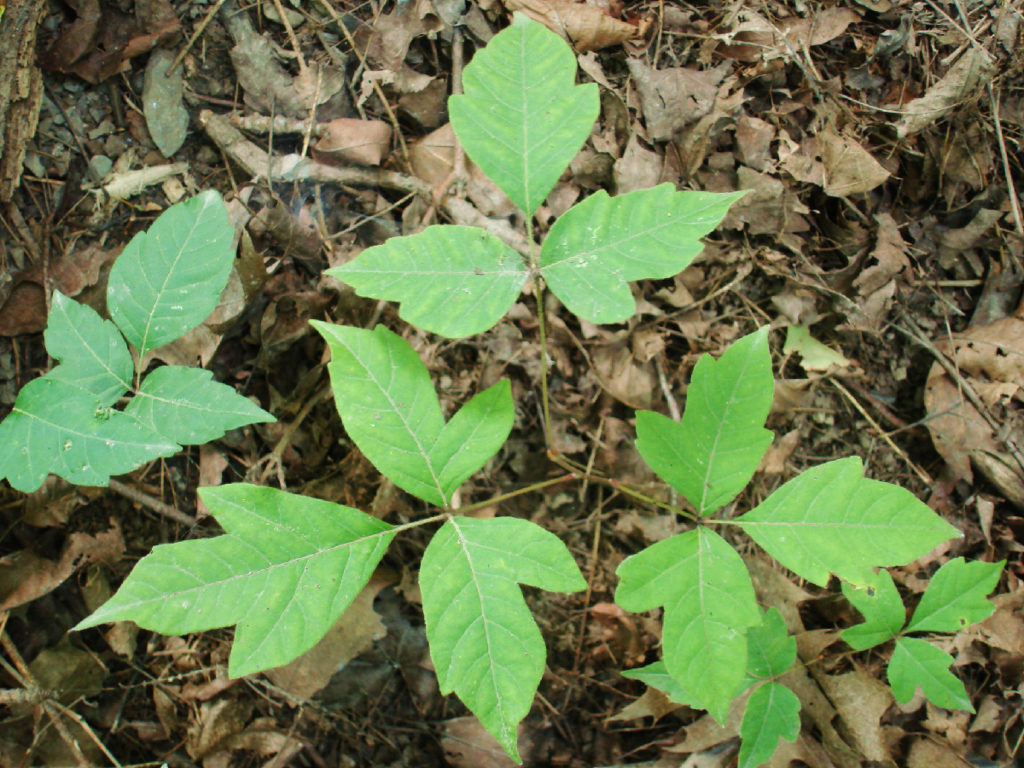 This cluster looks very different from the stuff in our yard. Still poisonous.

Different people look for different defining aspects, and there are many. I personally look for the thumbs.

When in doubt, its poison ivy.

The leaf color can vary from season to season, from red in the sping to dark or light green in the summer, and orange or red in the fall.

The leaf shape is also not consistent from plant to plant. The first photo on the page shows relatively smooth leaves with short sharp ‘thumbs’. The second photo has very pronounced and more rounded ‘thumbs’.

The vines can be very thin at the leaf nodes, but main trunks can be as big as an inch or two thick.

If You Get Poison Ivy

Firstly, DO NOT TAKE A HOT SHOWER.

The irritating part of poison ivy is the oils which get onto your skin from the surfaces of the leaves and from damaging the stems (if you cut it, oil will start to well up like droplets of sap). When you take a hot shower, your pores open up and the oil can migrate further into your skin. Badness.

You will want to wash up as soon as you can. Thoroughly.

Leave all of the tools and shoes that came in contact with the poison ivy outside. You’ll want to clean these off with rubbing alcohol later.

Once you get inside, touch as little as possible; the oil transfers and stays around a long time. Toss your clothes into a cold water wash with an extra rinse cycle. Again, be sure to later wipe down your washer knobs and anything else you touch inside with rubbing alcohol.

Take a cool shower, being sure to wash your hands several times first, since you will be likely using these to touch your hair and face. Wash any areas that touched poison ivy thoroughly. Be aware of moving the oil around through transfer; its common to have poison ivy on your nether regions because of its sticktuitiveness.

Go back and clean off your shoes and tools and anything else you touched.

If you still get a poison ivy rash, the urgent care center can prescribe steroids, or you can wait it out with antihistamine, soothing calamine lotion, or mint toothpaste. DO NOT USE ANTIHISTAMINE, ANTIBIOTIC OR ANESTHETIC LOTIONS, which can make the rash worse or spread it around.

Fever, pus, yellow scabs, or no change in two weeks means you need to get to the doctor. Some people even have trouble breathing or swallowing, or start swelling up, which is an ER trip. Additionally, if you do take precautions and still get any poison ivy on your genitals, head to the doctor immediately.

Getting Rid Of It

I just have to mention this first: DO NOT BURN IT. Imagine breathing in poison ivy oil. Into your lungs. Yeah.

Do you really need to get rid of the poison ivy you found? If you don’t have to, its easier to just leave it alone. Seriously. If this is at the edge of a forest on the back of your property that no one ventures to, you’ll never truly be rid of it. But if this poison ivy is in your front yard or by your dog house, steel yourself.

If you are averse to using chemicals… also steel yourself. You will want to break character for poison ivy. Otherwise you will have several weeks of digging up roots repeatedly, or finding a friend with a goat to graze it down (which still won’t get rid of the roots).

We used RoundUp Poison Ivy on the leaves, which took two or three applications to get the leaves to wilt. This happened over the course of a few weeks. It says its rain safe, but don’t believe it. Wait until the start of a dry spell to apply. Don’t forget where you apply, since leaves may dry up and fall off, making it hard to find the second time (turf marking paint can help here, as long as you do not paint the leaves, which will protect them from the herbicide).

Then, suit up with trashy long sleeve shirts and long pants, tall boots, and heavy nitrile gloves (not latex), and get to rippin’. If you are worried about wiping your forehead or eyes while working, wear goggles and a sweatband.

Dig up as much of the root as possible, as well as anything that was touching the poison ivy. Put all of the vegetation into garbage bags rather than paper compost bags, since you will be throwing this into the waste stream instead of the compost stream. Once you are done, do one more check for any hairy stems or suspicious vines and bag those up too. Tie up the bags, carefully remove your boots, and toss the gloves without touching the outsides.

As above, assume you have poison ivy, and go wash up.

Many people recommend adding a heavy layer of mulch to the area where plants were removed, to the tune of several feet. Yes, feet. As in more than 24 inches. You can also plant some ground vines like virginia creeper or a pretty clematis, but the wood chips are important.

How Did We Do? 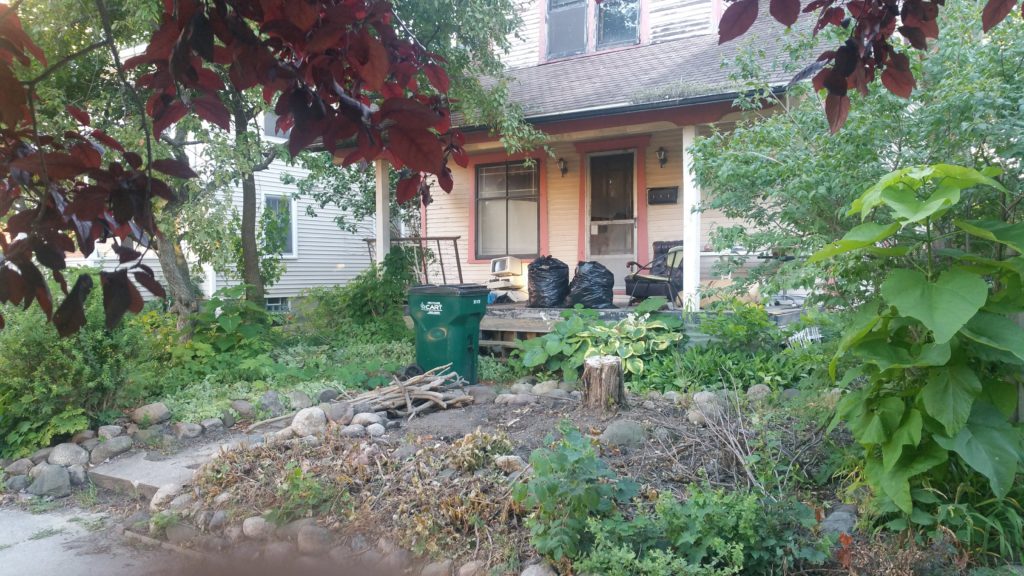 Two of the trash bags up on the porch

We took up as much of the vine and its roots as we thought possible, as well as the thorny bushes and piles of branches that the ivy was growing through. The small patch of ivy in the backyard is also now gone. There may be more back there, but its too thick to see the ground…

We now need to consider wood chips to make sure the vine stays away, but to save on cost, we are having our tree trimmer leave the mulch he makes on site so that we can move it to the correct location. Soon we will have a much better view of the outside of the hoard, and then attention to the foundation can begin.