Yeah. That will happen from time to time.

I’m not sure I actually took any pictures of it before from the outside, but there is a small room off the back of the kitchen, which we will term the mudroom. It, too, contains a bunch of trash and suchnot, but as it was not a usable room and has no stairs going up to it, and the screen door was broken off and sitting in the mud against the opening, we haven’t gone in it to clean. And of course, we only just cleaned out the kitchen enough to reach it from the inside. 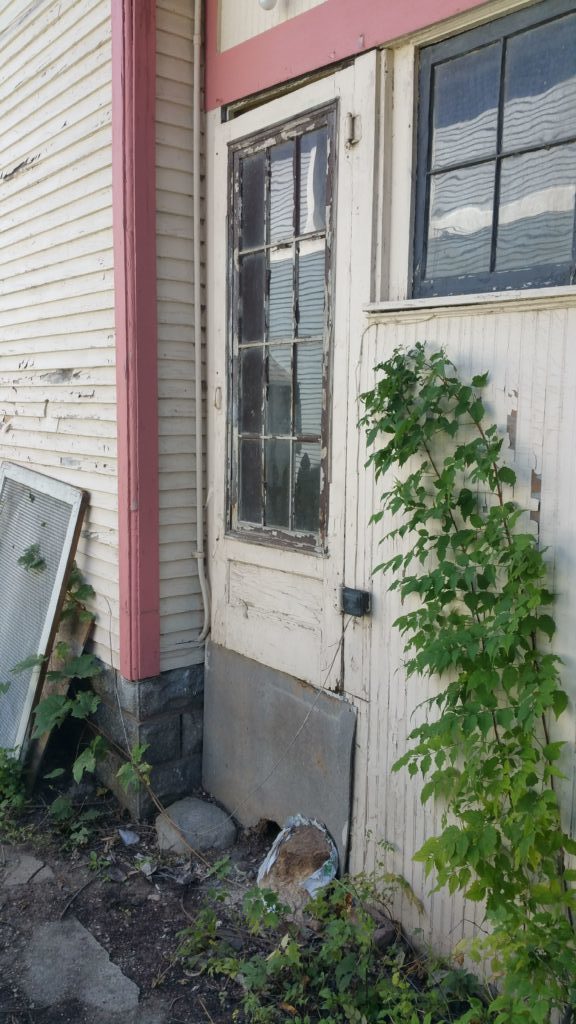 The door has been suspiciously and purposefully replaced.

You will note the lack of stairs, but the presence of door. That’s my doing. 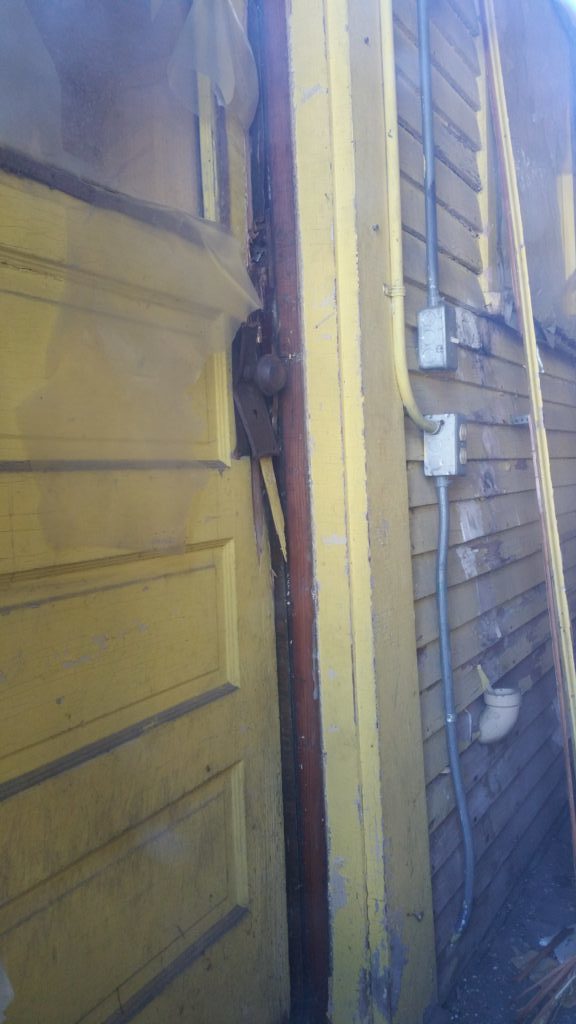 This door was suspiciously and purposefully displaced.

The jamb and lock damage was not my doing.

I returned home and noticed that the screen door, which was propped diagonally against its opening, was shifted to be perfectly vertical and slightly to the side. It was a windy day, so I had supposed it settled. No big deal. I head over to make sure that was the case, and notice the above. A light tap on the door tells me it swings right into the kitchen.

Nice to know it still works, I suppose.

A cautious and quiet walkthrough of the house shows absolutely no signs of entry; no missing items, no defaced property (not that I could tell) and no started fires, luckily. I was short on nails or screws so I shut the door hard and returned to my normal day, adding a mental note to come seal it up later.

I returned home again an hour or two later, still the same blustery day, and found the door had opened once again.

Hillary joined me in shakily holding up the flashlight while we entered the hoard. A few steps and stop. Listen. No sounds.

A few more steps. Wave the flashlight around into the corners. Pretend you know what you are doing.

Still, nothing is missing and nothing has been disturbed. We quickly nail up the mudroom door and make our exit.

The next day, the hoard now has a few motion lights and a security camera.

What I think happened

Likely, a couple of kids or opportunity seeking person wanted a place to smoke weed or make a few quick bucks. A quick walkaround showed no signs of activity in the hoard, and no lights on. As is to be expected. There’s no electricity.

They jammed open the door of this supposedly abandoned building, found it to be incredibly foul smelling and devoid of valuable property, then promptly turned tail.

Our current goal has not changed; we need to get the power on and the furnace going, if not just for heat so we can work, but to power electrical systems for lights, just to make the place seem like it could support life.

We also have shotgunned the back yard, adding a nice path which will help us remove objects from the oubliette of a basement, and suffocate some of the scrub plants. Besides that, It does triple duty to showcase new construction. Someone is taking care of this house, which means that there are people there, no matter the frequency. Robbers don’t want to run into someone.