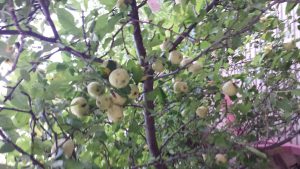 Apples in their natural habitat

The seasons change from fall to winter, but before they do, we want to make good use of our hoard’s apple trees. And you thought all the fun was happening inside the house!

So, it turns out that there are three apple trees on the property. The two in the back are literally covered in grape vines, like to the top, so they definitely aren’t producing any apples currently. However, next to the driveway there is another tree (seriously, the biggest apple tree I have ever seen) and talking to the neighbor’s son we discovered it does indeed produce edible apples. Score! He did warn us that the tree is buggy and needs to be sprayed. 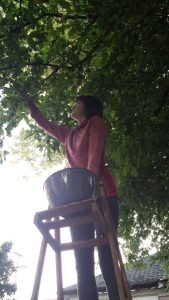 We found this ladder in the garage!

About a month ago AJ mentioned that he had recently picked and eaten one of our apples, and it was good. That is, he hasn’t contracted any horrible illnesses yet. So, I figured it was time to get a bunch and make applesauce, and also try my hand at apple butter.

Upon collecting our apples we did notice that many of them looked a little strange. They were knobbly and had weird vein-type lines on them. Upon cutting them open we noticed that the flesh was sometimes speckled with brown.

This must be the bugs that our neighbor mentioned! 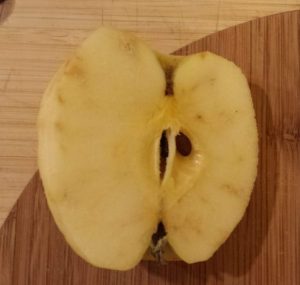 These dark flecks aren’t from us cutting the apple open.

Apple maggots, a type of fruit fly, are the most common apple tree pest. Besides the knobbly outside, when cut open, the apples will have little brown trails or specks throughout the flesh. There may also be one or more small holes at the skin of the apple; this would be where the larvae left to pupate in the ground below the tree.

This also is what causes the apples to prematurely drop from the tree. Caveat: if the fruit has fallen to the ground it shouldn’t be eaten as there could be other bacteria present.

How does one get rid of a fruit fly infestation? Well, first its important to clean up all the fallen apples. These can be a breeding ground for new fruit flies, which come up from the soil. There are also traps one can purchase, which look like large sticky apples or sticky yellow cards (think fly traps). These lure the flies to their doom instead of them going into fresh apples, and are posted in the tree just as it flowers.

We also read about adding beneficial nematodes to the soil, which among hundreds of other bugs, eat the apple maggots before they get their wings. The trees can also be dusted with purified kaolin clay as a pesticide-free option before resorting to any harsh sprays.

But Can You Eat Them? 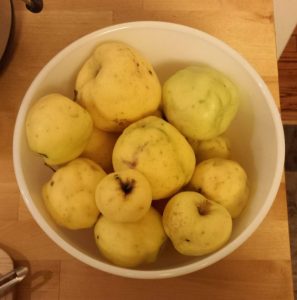 So, are the apples we picked edible? AJ called up The Google and was reading me all of this use(less)ful information while I stood over his shoulder repeating “But can we eat them?”, and “Are the bugs still IN the apples?”

Long story short, the tree is indeed likely afflicted with these apple maggots, and lo and behold, the fruit is edible! Depending of course on your ick tolerance.

Because of the less than appetizing appearance, and since the flesh can become mealy, the apples are best cooked into applesauce or apple butter.

Since several years ago, when we went to a nearby Apple Butter festival, I have wanted to make our own apple butter. But of course being me, it had to be with no added sugar. Turns out you can make it right in your crock pot, which is handy because that is also how I make applesauce. Apple butter is basically just applesauce that you cook twice as long and add more spices to. 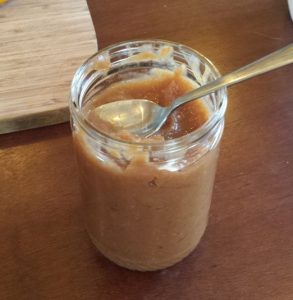 I deviated slightly from this recipe from Lexi’s Clean Kitchen:

*I went heavy on all spices

Put everything in the crock pot and cook on low for 10 hours; mash or blend with a stick blender and cook for another 2-ish hours with the lid ajar to help it thicken. Bam! Apple Butter!

If you do not want to eat our delicious apple butter because of its dubious source, I will not be offended (more for me!) 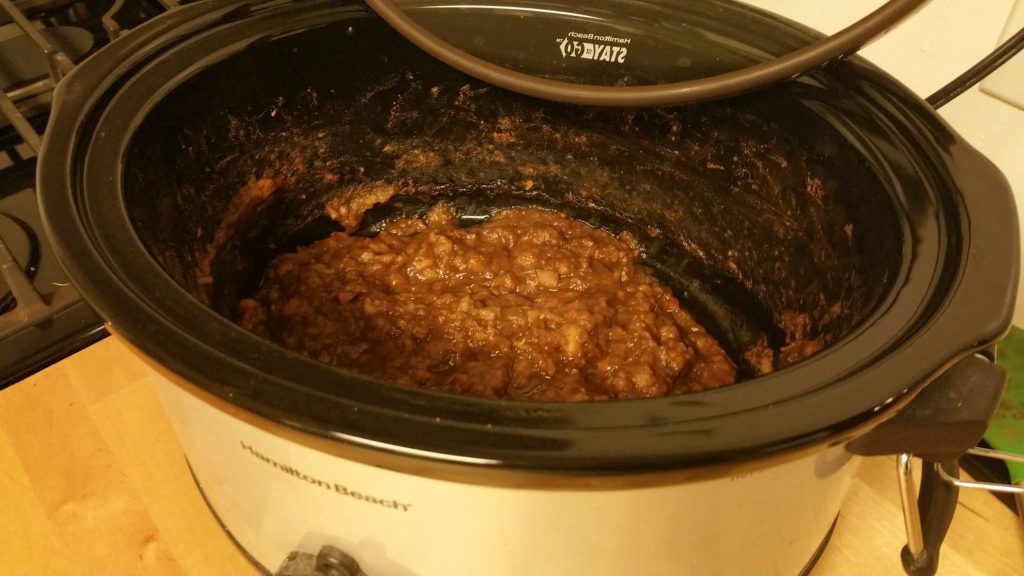 Preparing For Next Year

We know that we will need to get this tree ready for next year, so we are researching the best products of the options available. We do also know that we need to collect the fallen apples lest the apple maggots over-winter in the ground, and have to do it before they either rot away to nothing or freeze to the soil.

And all of the trees still need massive amounts of pruning. The closest one is rubbing against the house. There are dead branches to take off, and they should also be pruned in early spring, around April. But, the techniques for which branches to take off is still a mystery to research.