Hopefully, the worst is behind us: the fridge is in the dumpster. It’s time to scoop out the rest of the basement. 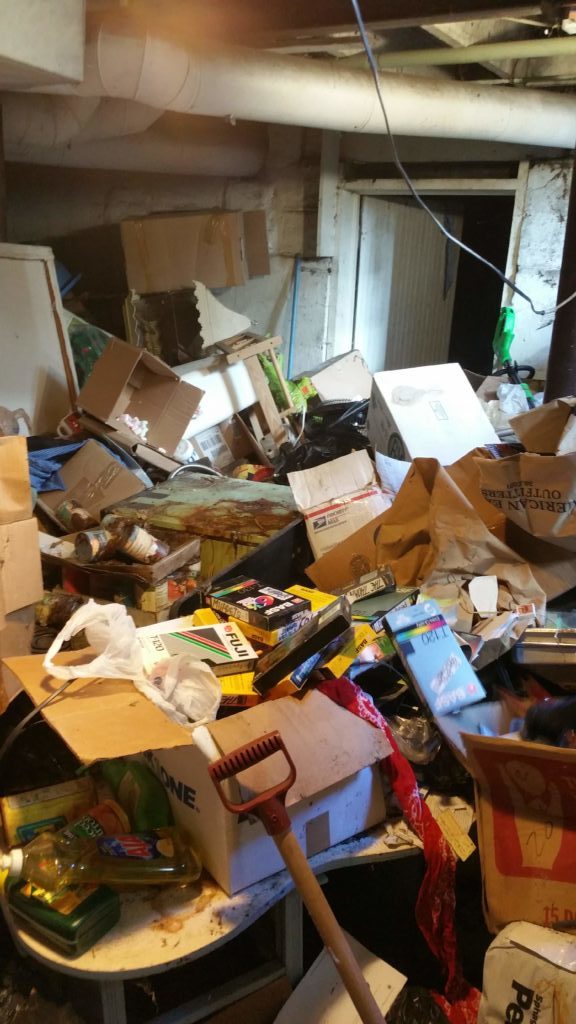 Looking from the front of the house. Do you see the stove?

Because we guessed that the basement is a bit more moist than the rest of the house, we called for a larger crew in teams to help us bring up items from the basement, load them into carts, and tip them into the dumpster. Bucket brigade style.

Completely unbeknownst to anyone (and how could they have known), the rear room of the basement was not used solely for laundry, but also for storage of food long term.

Yeah, we have to deal with another rancid bucket of who knows what. We’ll do a Tarantino and rewind this back for you.

Getting Into The Basement

In a previous episode, we were able to sift our way down into the basement landing, at which point we decided it was too much work (at the time) to forge into the basement further because of the dampness. Well, turns out the dampness is because the sewer drain is right around there. Luckily it didn’t spread too far into the rest of the room. This meant any biodegradable containers (cardboard boxes) haven’t completely biodegraded yet. 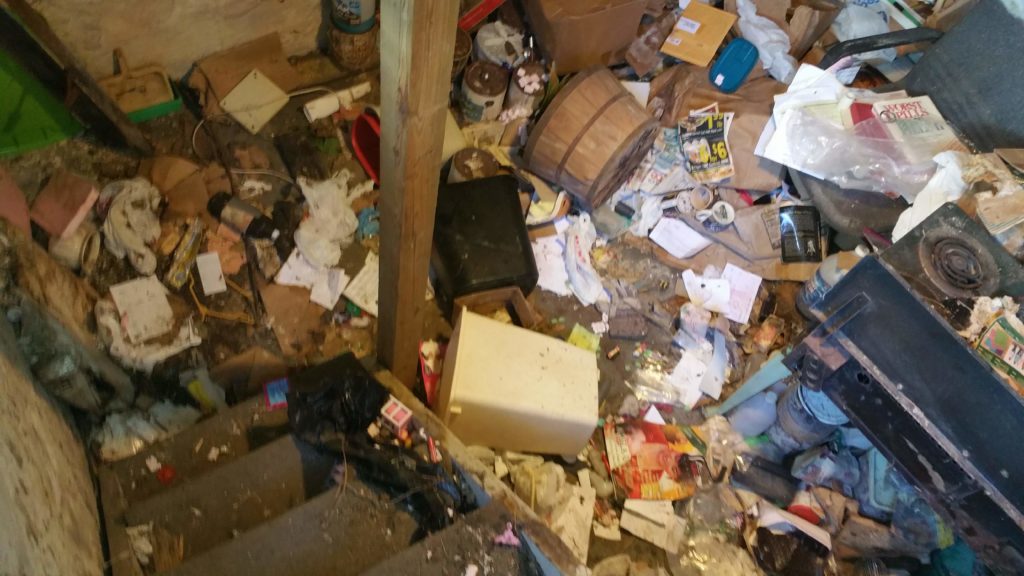 Our starting point. Note the handy trash cans. We didn’t bring those. 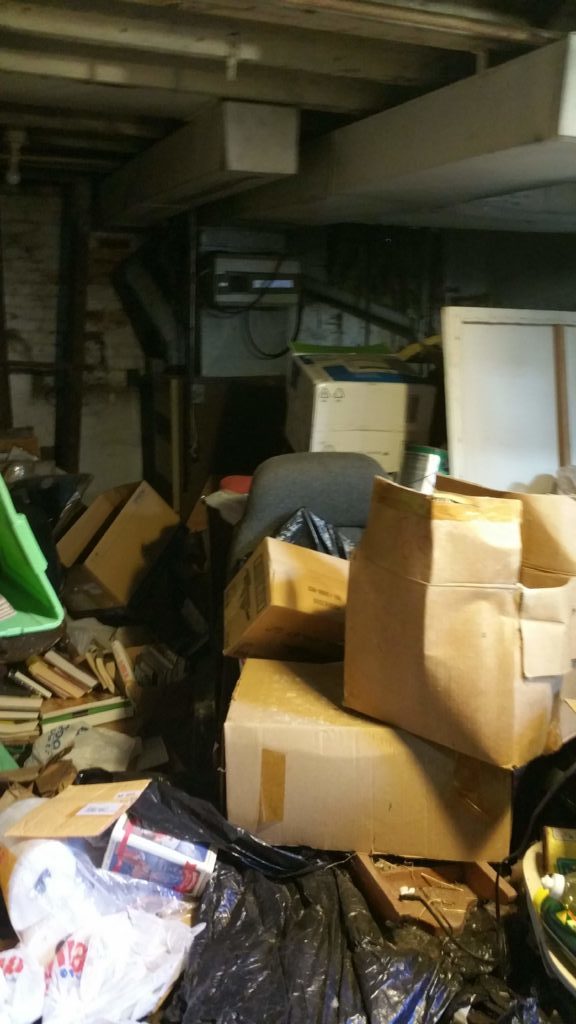 Most of the items were indeed packed into boxes already, and were ginger-careful brought to the landing one by one. Another team loaded the boxes into wheelbarrows: 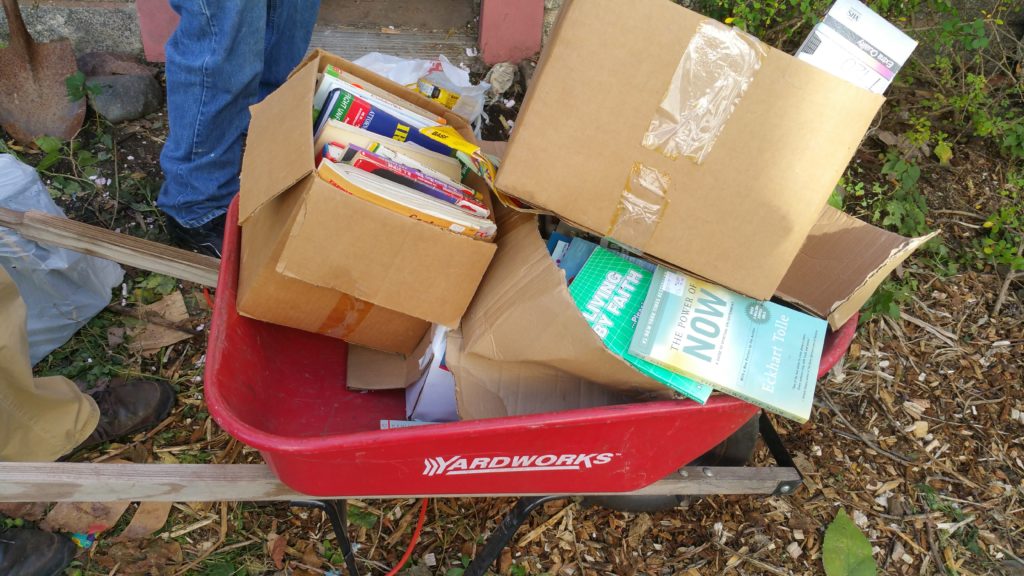 And our final duo performed the wheelbarrowing and dumping out into the dumpster: 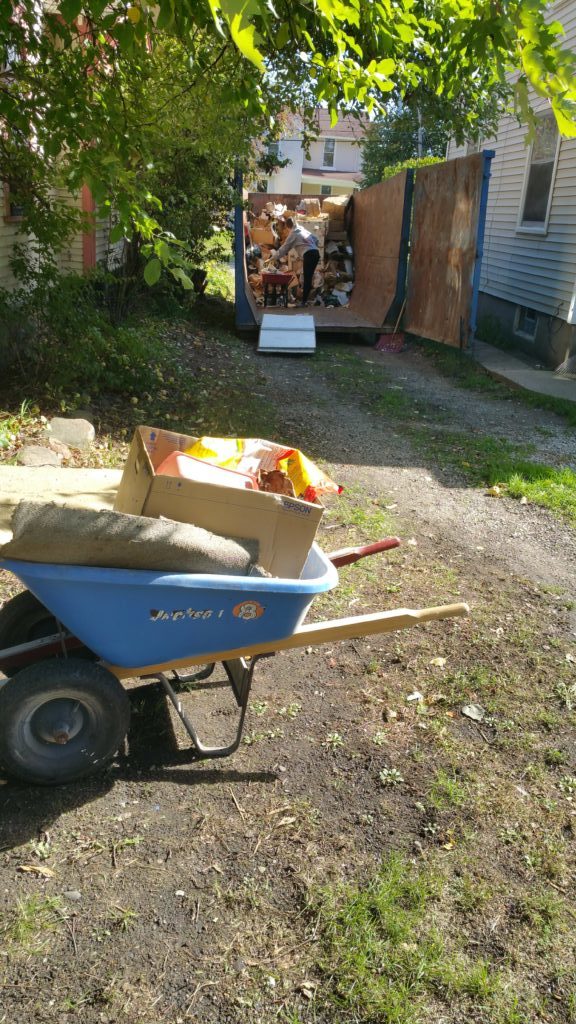 This is where the ramp came in handy

Work went extremely quickly in this fashion, and we uncovered quite a lot. 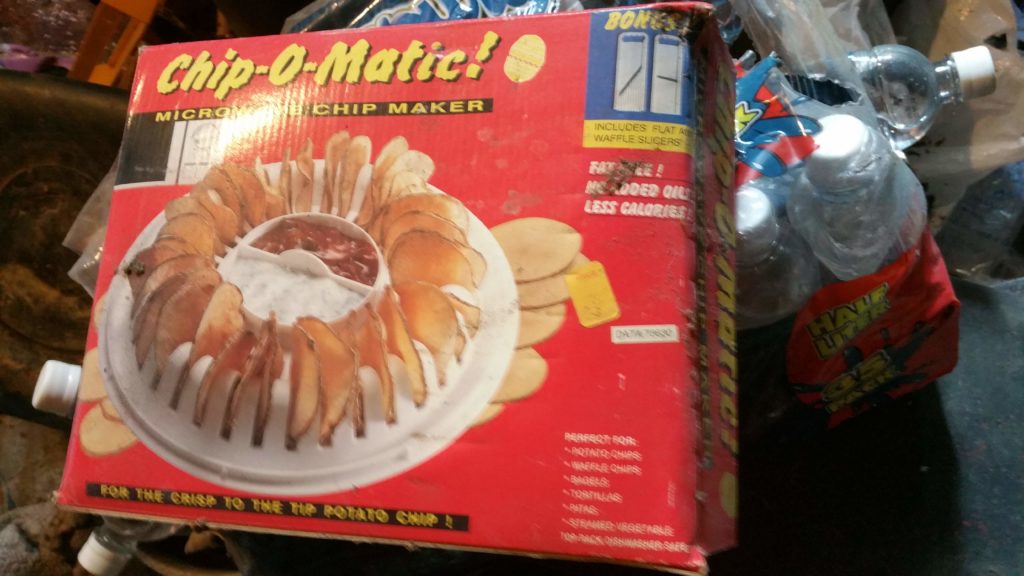 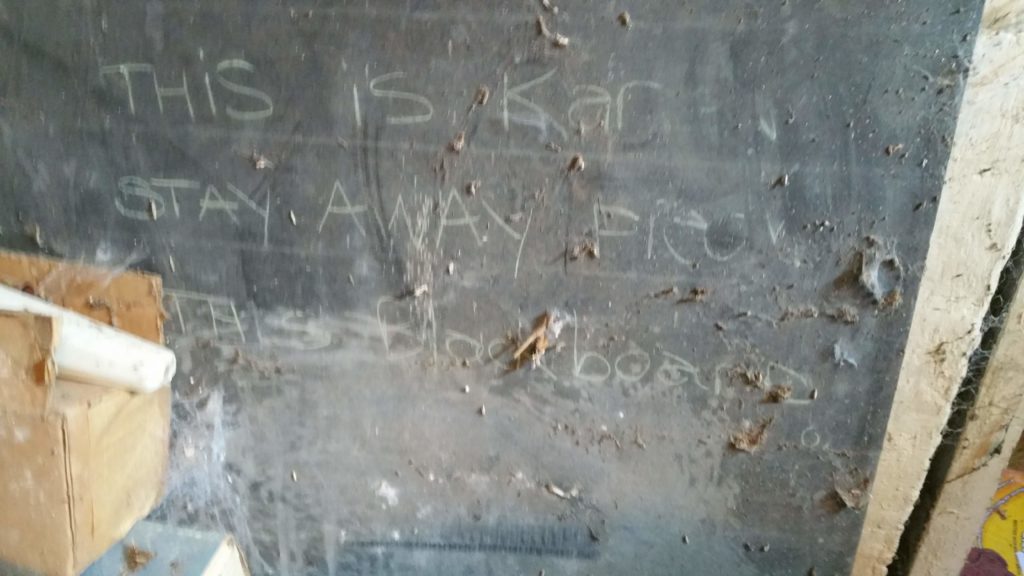 Stay cool everyone, just back away 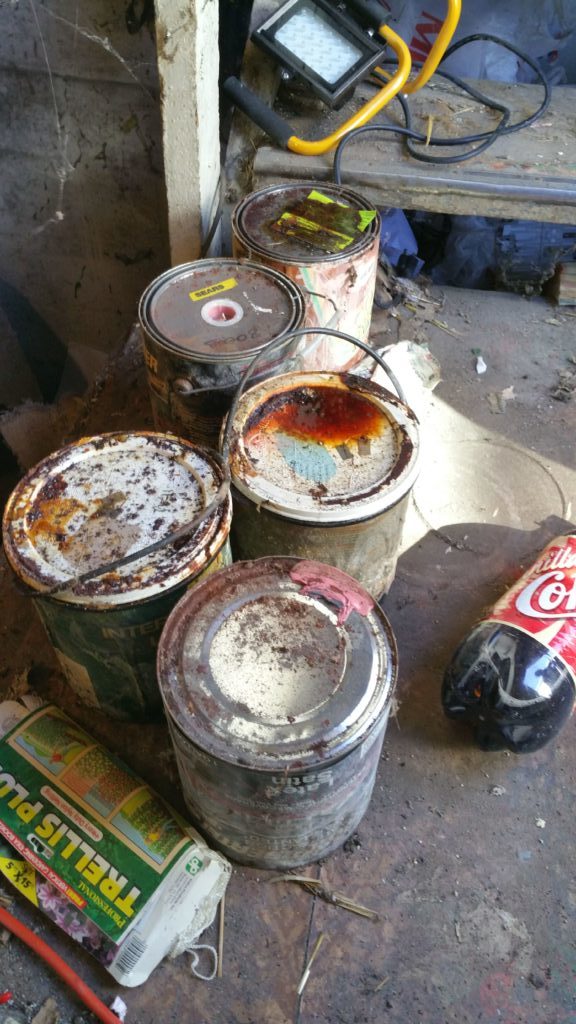 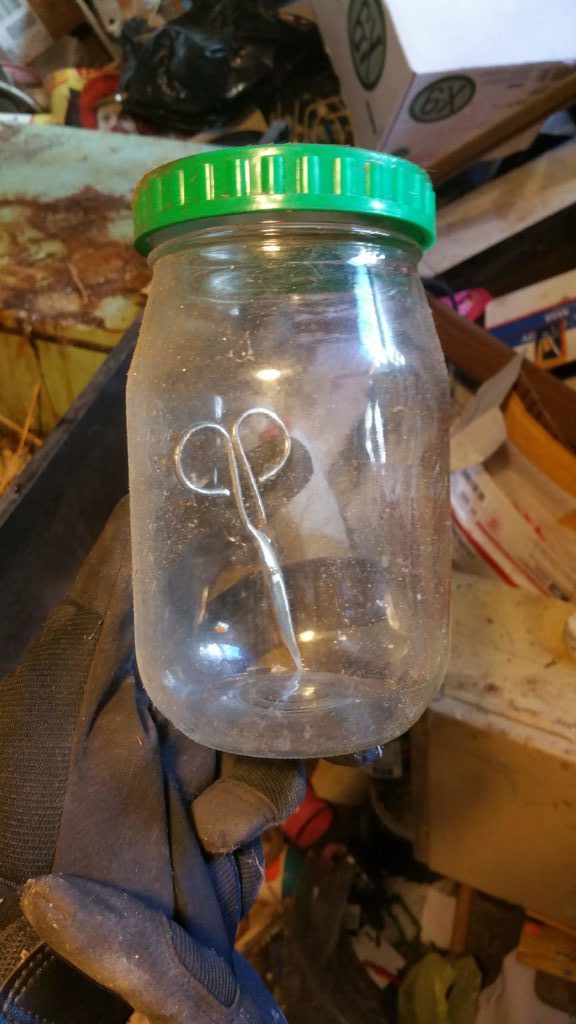 The ol’ toe scissors. But, where did the toenails go? 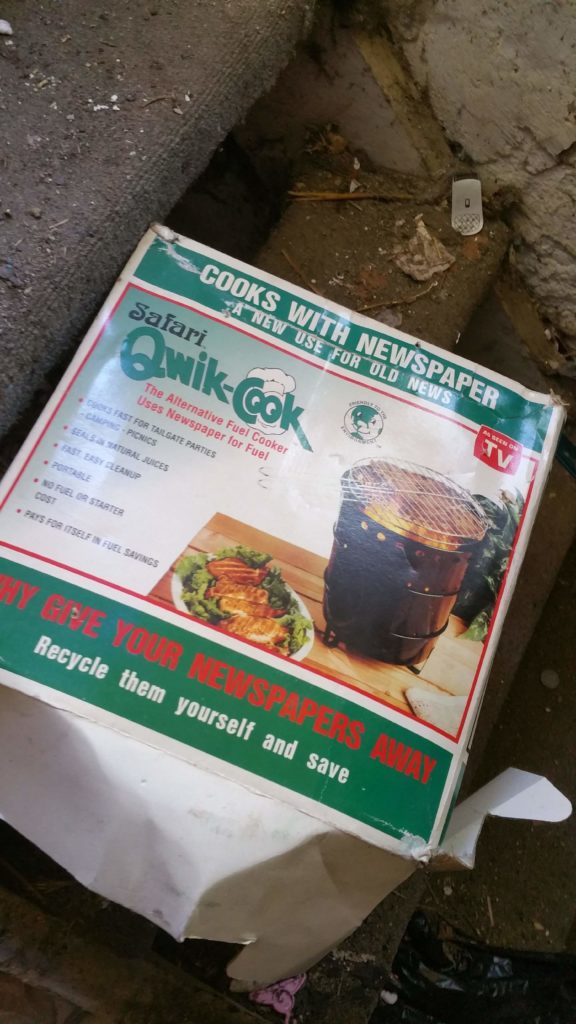 THIS EXPLAINS THE NEWSPAPERS

The notable find, as you have seen in prior posts, is the original electric range. We have reached it at last and can determine its condition. 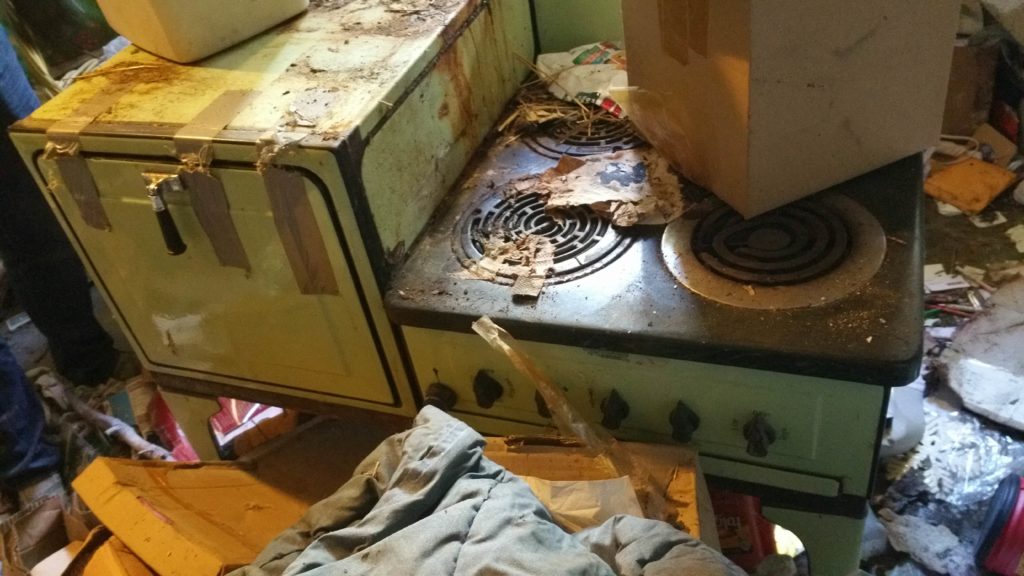 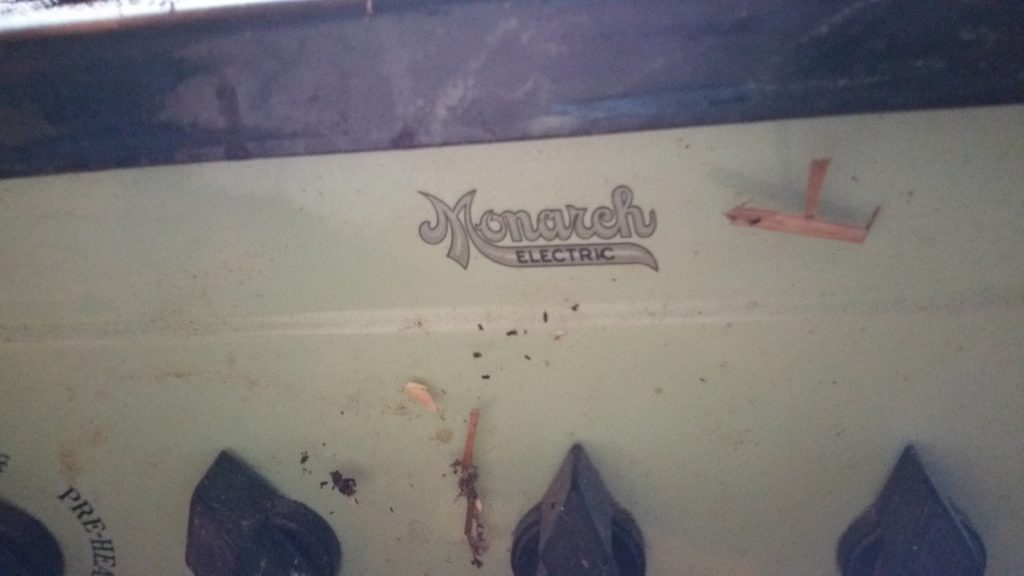 Never heard of em… guess it was before my time?

The Monarch Company was actually the Malleable Iron Range Company, started before the turn of the century. They were lucky to continue work through the first World War, crafting coal and wood field stoves. They weathered the Great Depression as well, and received contracts again for metal parts and small stoves for the Manhattan Project. Because of this, they received approval to continue appliance manufacturing on the home front during WW2. But, in the 1980s, new regulations against wood and coal appliances cut into their business of add-on furnaces and stoves. They filed for bankruptcy in 1985, and were purchased by the same company that now makes NESCO small home appliances.

I was originally hoping that someone made round induction plates that could be drop-in replacements for these old burners, but its more likely that we will need to get a donor stove if we want to rehab this guy. The horizontal surfaces are pretty tough, having had canned food sitting on them for some years. Might need to hire a professional to do the outside, but this should be a fun project.

The basement was also home to another rarity, a home incinerator. 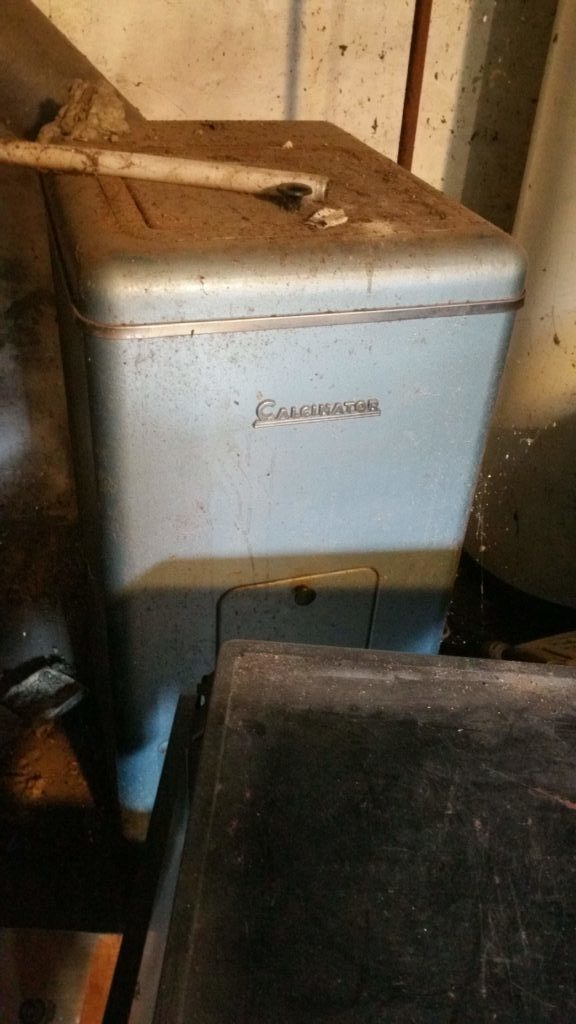 Calcinator Corporation has a more, er, obscured history, homed in Bay City, MI. The oldest trademark I could find for the company was from 1954, and the oldest patent that it owns is from 1951. They seemed to be exclusively in the small home incinerator business, filing patents only for that technology until around 1970. The only other data I can find is that the plant is a confirmed asbestos jobsite, and if you or a loved one suffer from mesothelioma and worked at the plant, you may be entitled to compensation.

I couldn’t find historical data on how common home incinerators were, but there are plenty of places that will still sell you an indoor gas fired or outdoor ‘burn barrel’ incinerator. The impact on the environment is likely very high, however, so I don’t think this will get fired up. I’ll probably research this a bit more at the library.

Getting to the Back Room

As I mentioned, progress was quick through the rest of the main room of the basement. The basement is divided down the middle into two rooms, the front half and the back half of the house. We were able to poke our heads into the back, but without moving our portable light sources, we couldn’t tell exactly what was going on. 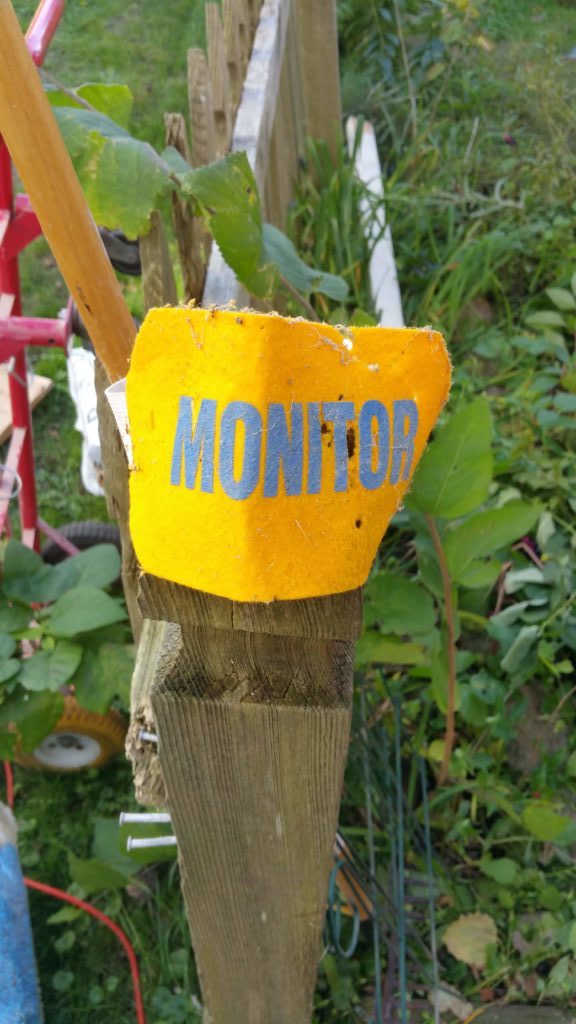 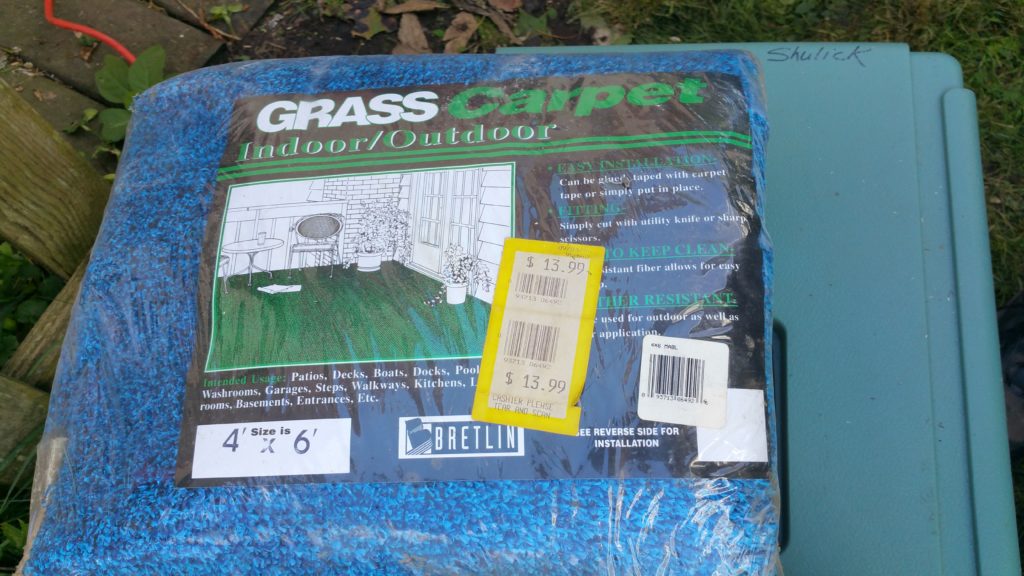 Indoor/outdoor? You mean I can put this in my living room!?

Our progress got us to a passable level in the basement where we could vault ourselves through the single door into the last unexplored room of the house. At first glance, all was normal. In fact, this room holds what appears to be the least amount of stuff of any of the others we’ve been in. Including the hallway. 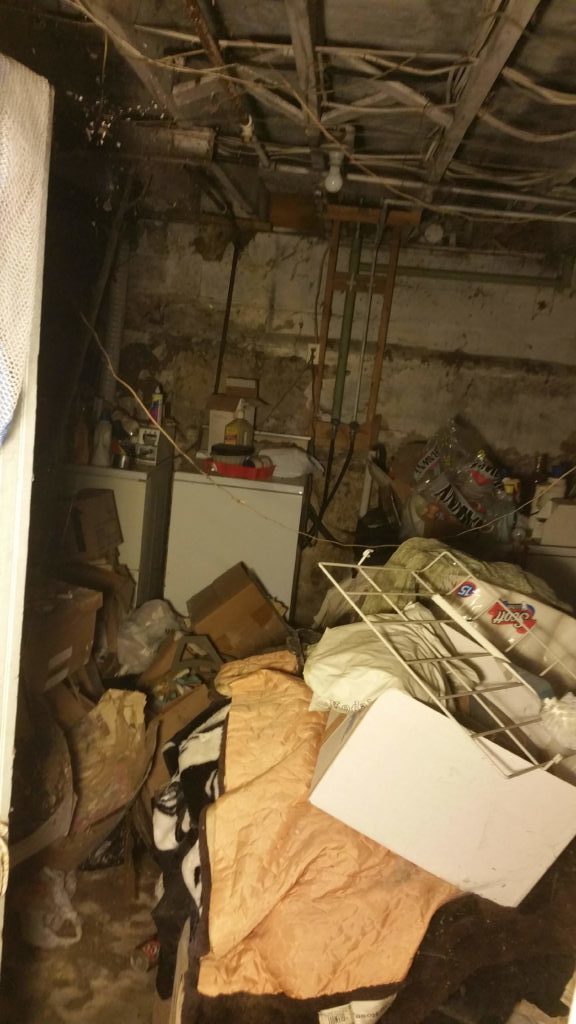 Washer and dryer, and a few piles of (empty?) cardboard boxes 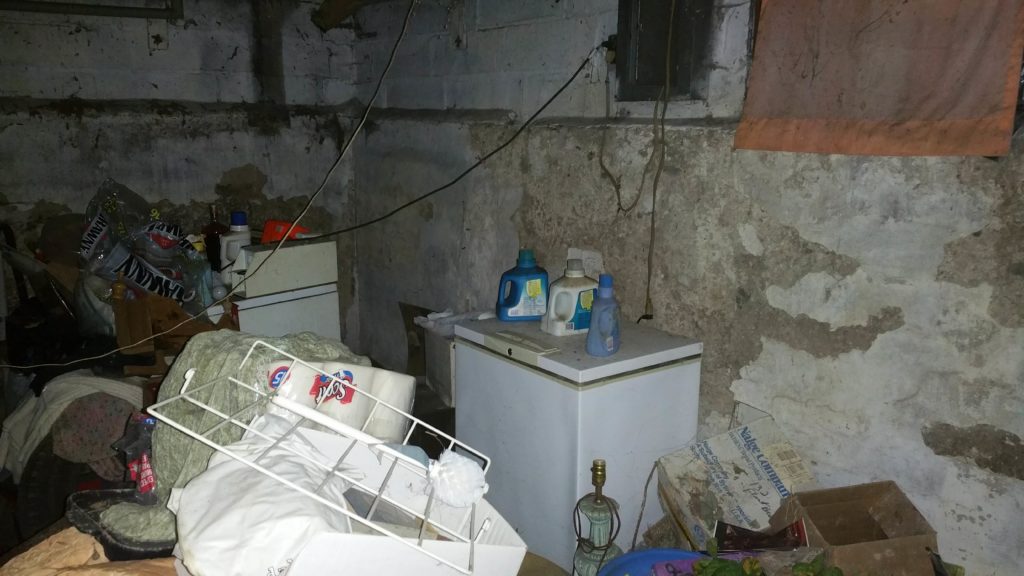 *Low strings crescendo and fade to black. Cut to montage of next episode*

Will our heroic crew be able to safely extract the freezer? How will they manage it up the stairs? What secrets does it hold? Find out next time on Stargate SG-1: The Evisceration of the Chest Freezer!