Late into the night, I was working on taking all of the tree and bush trimmings from the thicket that we generated when we thinned out the front yard, and lining them up into neat little piles along the driveway: 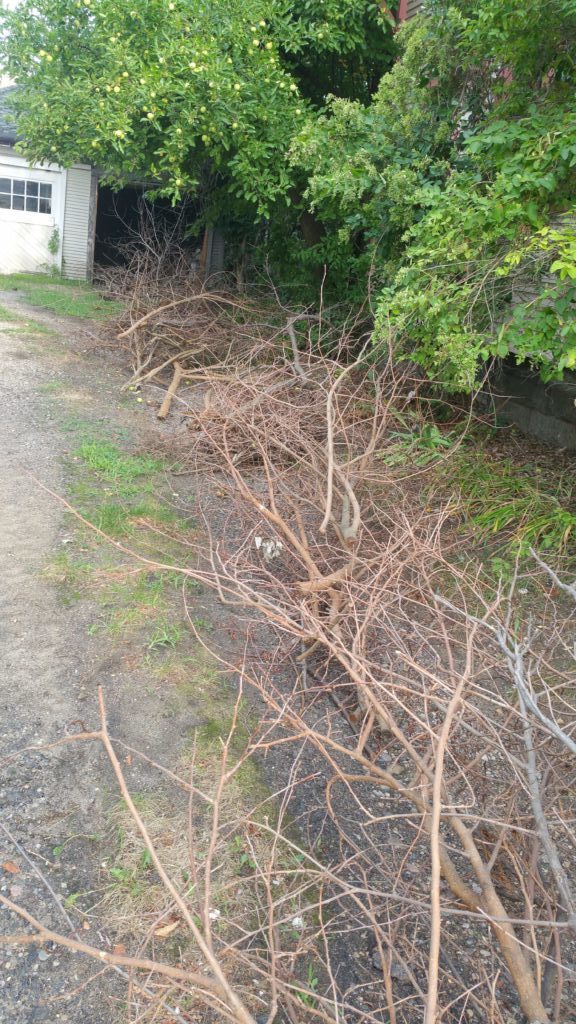 … under the watchful eye of the supervisor. 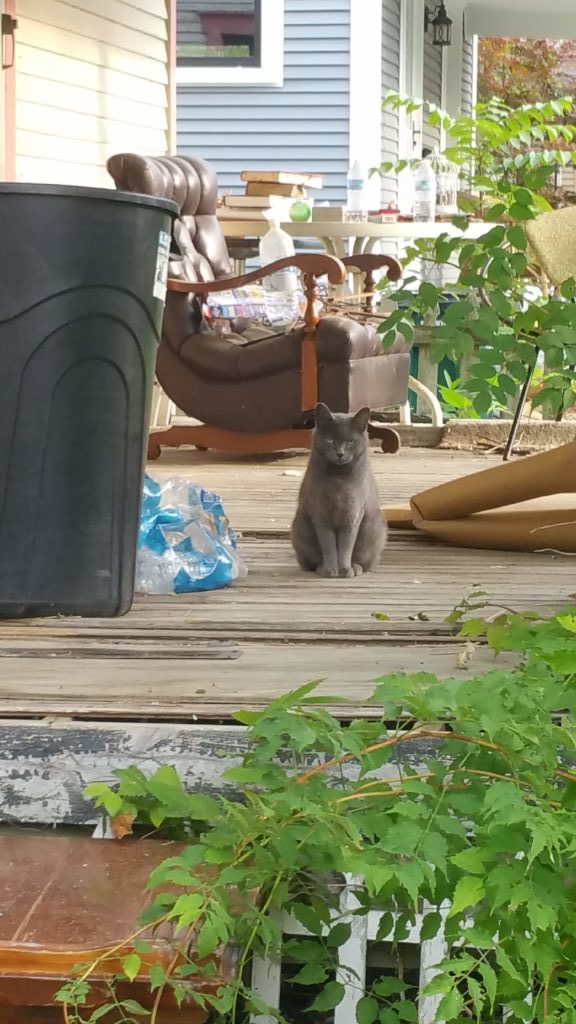 This is his house. We are just using it.

All in preparation for some unseen, potentially ethereal, tree removal elves to come through and remove the thickest and most dangerous (to remove) parts of the hoard’s backyard. Here’s a matched before and after: 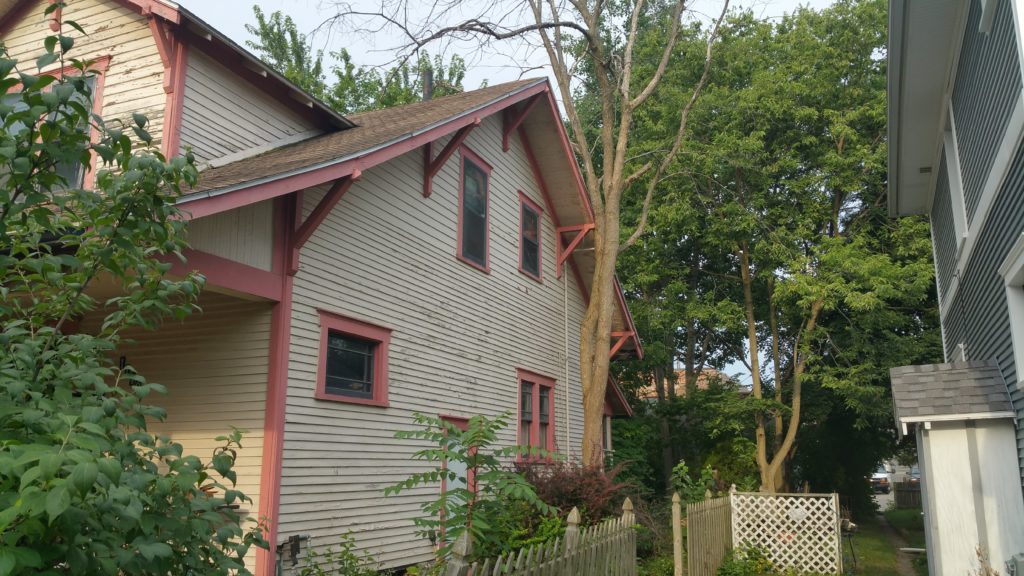 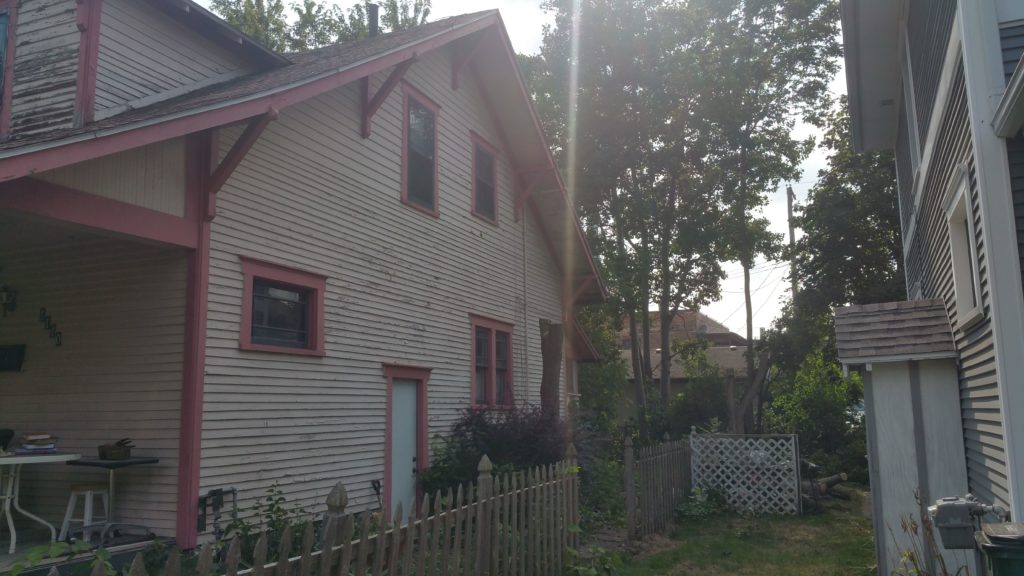 So bright, I gotta wear shades!

In all, four trees were taken down from this side of the yard and chipped up, including the crab apple I took down earlier. Most importantly, the large dead tree rubbing up against the house, and most visibly, the very large locust tree in the back right corner (the one blocking most of the sky back there) and a few scrub trees between. 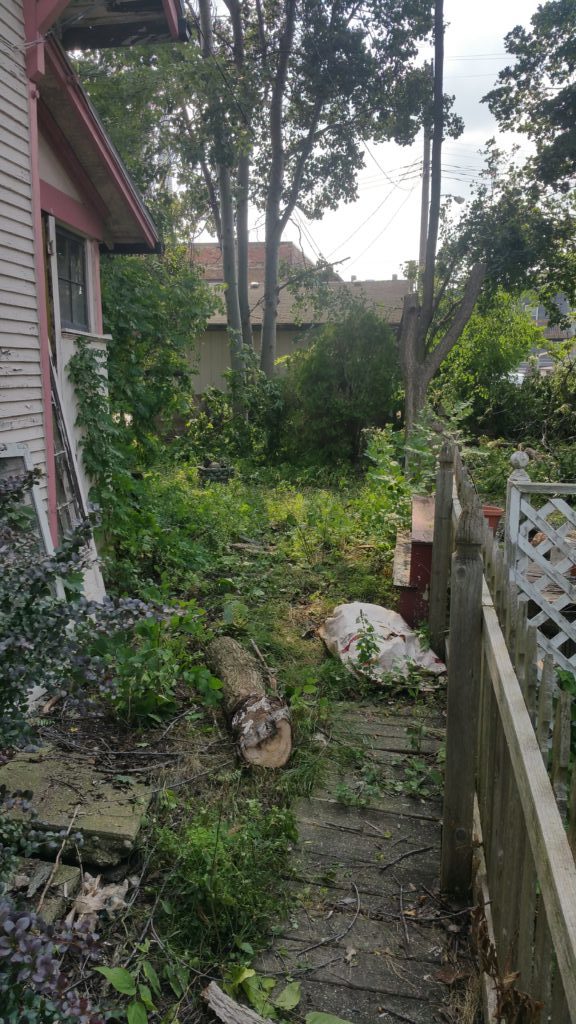 Its sort of a nice little glen now! 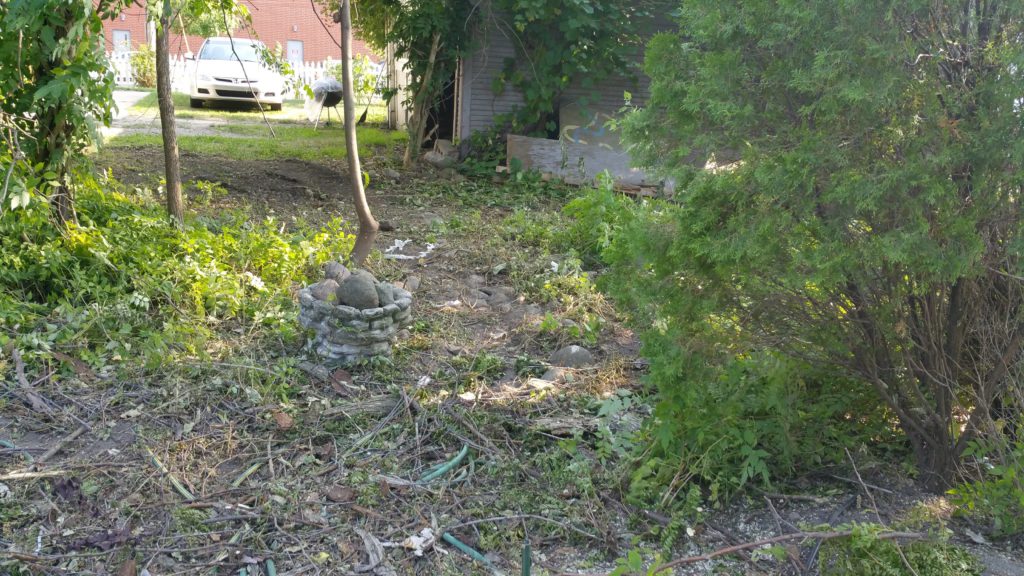 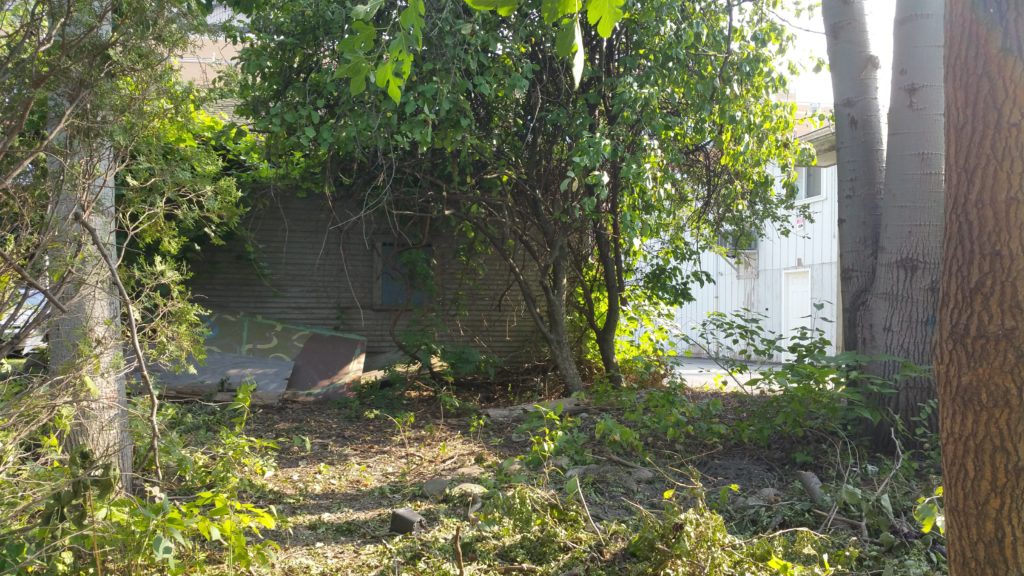 Intertwined apple trees at the corner of the garage, much more accessible for trimming now.

I of course had to inspect any damage done to the roof by the gigantic tree rubbing against it for the past decade. 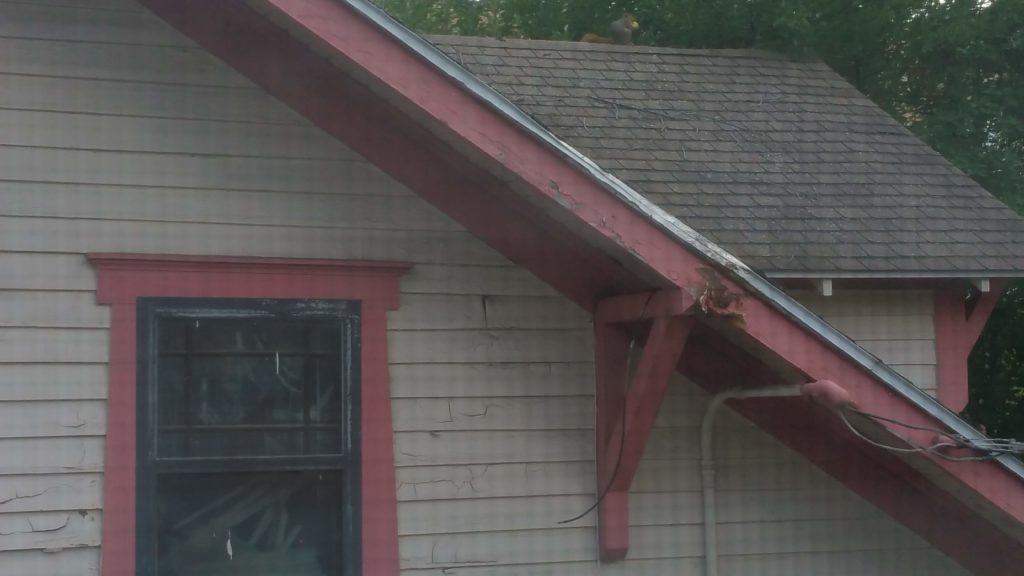 From this angle, it doesn’t look quite so bad. The drip edge underneath the shingles has been crimped, and probably should be replaced (though we might could just straighten it out). The end of the decorative corbel seems to be in good shape, other than the paint being rubbed off from there and the rake board. The rest of the roof seems to be more or less solid…. wait a second… 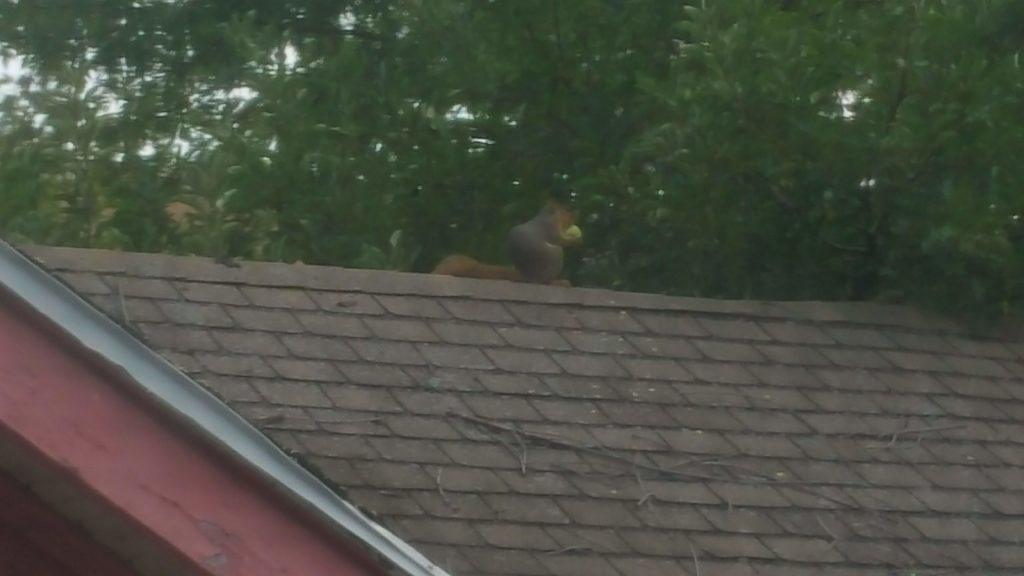 Get offa my house! Those are my apples!

I did also take a chance to check out the chimney from the outside, which is completely see-through. Poor drainage causing water along the outside of the brickwork just washed the bricks out. 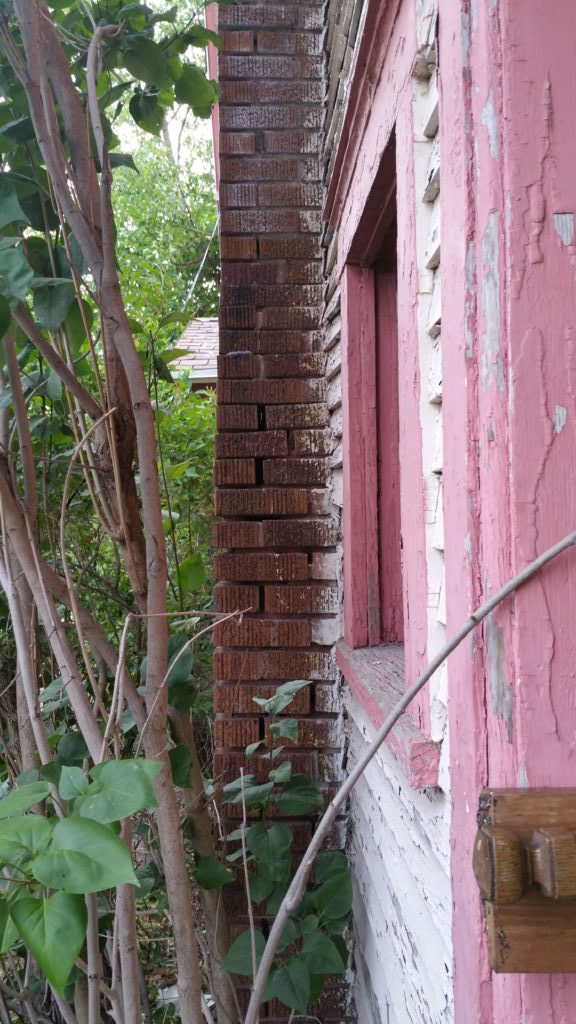 If you look carefully, you can see daylight on the other side. 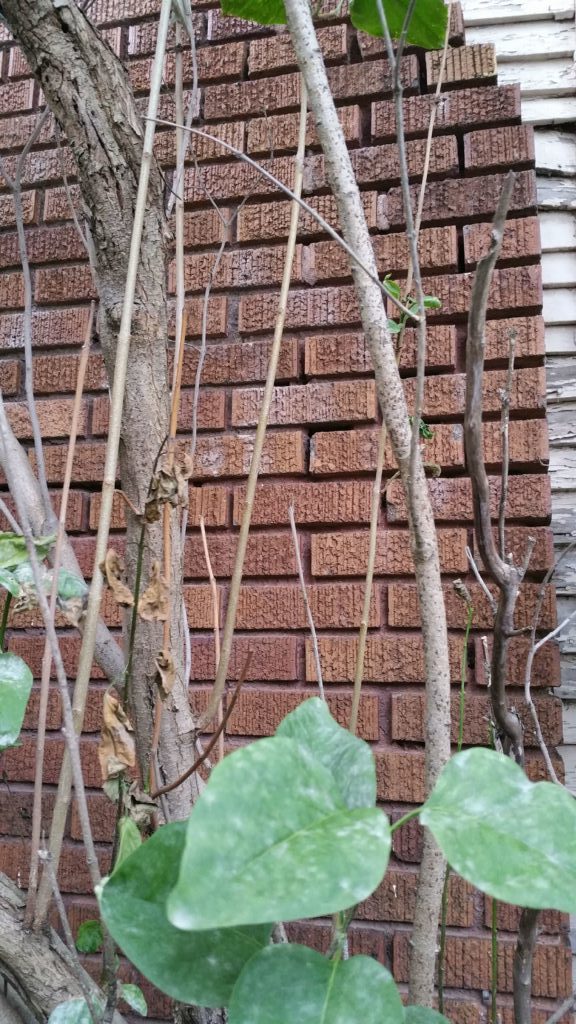 The bricks have lost almost all of their mortar and some have shifted.

It’s seeming more and more likely that the chimney could disappear completely, though I’m glad to give it the old college try.

What happened to the trees?

What, you think we got rid of them? Why throw away a good building material, especially when there is SO MUCH OF IT!? 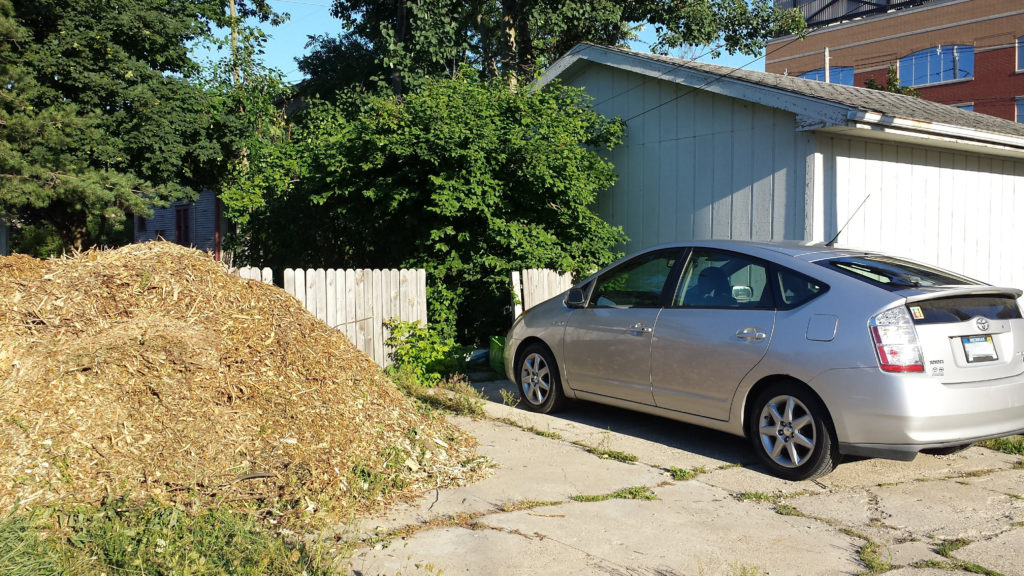 At least a whole car load in there, about 6 or 7 yards by my guess.

The mulch is destined to kill all of those pesky plants in the backyard, and also will ensure that no poison ivy comes back in the front.