This hoard update had to be a two parter. Because the kitchen stands alone. A depressing haunt displaying a complete breakdown in the most basic of human – and animal – needs.

Oh, and the back room on the first floor; let’s have a look in there too. 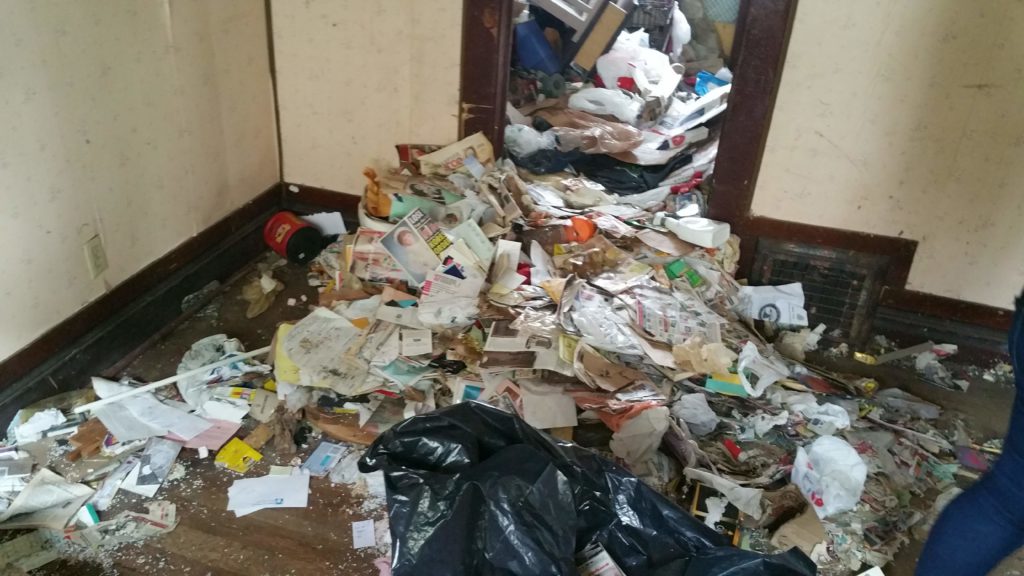 The kitchen, as you may recall it from my entry video.

I have opted to include a picture of the dog’s crate from the kitchen in this article. It’s the last picture of the article, and I’ll put another warning before it if you want to skip seeing it standing alone.

This was honestly the least exciting room as far as finds. Unless you count the fact that it has holes pre-drilled for installing a complete first floor bathroom. 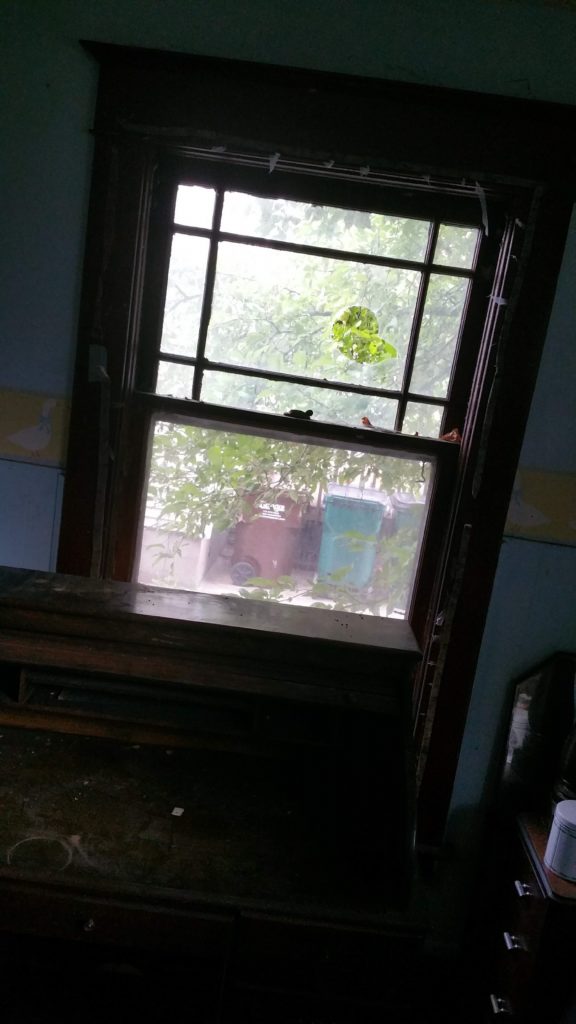 The apple tree got a little feisty.

The rear room, apparently a young child’s room or nursery, was the original home of the roll top desk, the world record bubble gum wrapper attempt, and our first stop in the hoard, since it was the most empty room at the time. 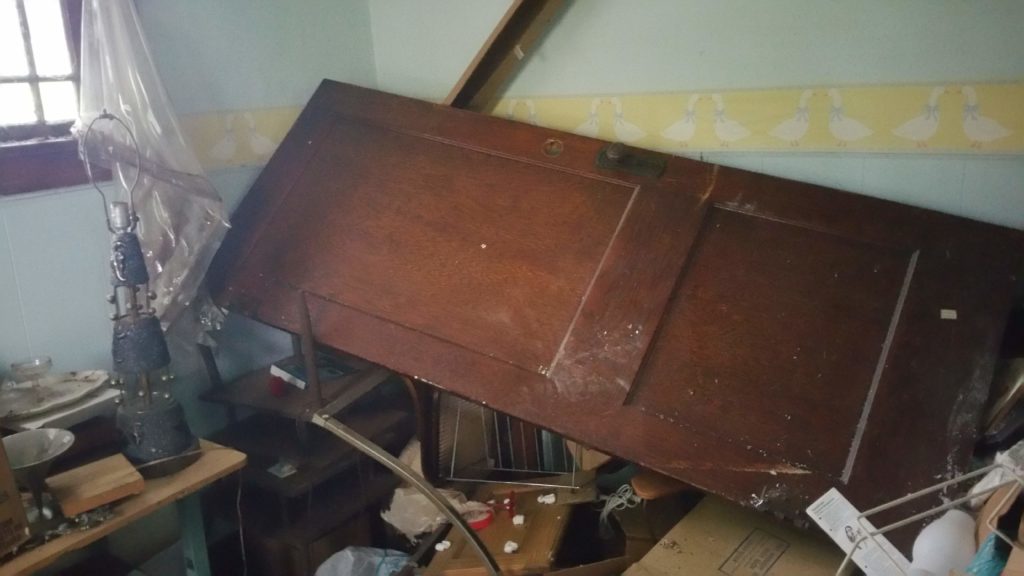 This door fits on the entry to this room! Why remove it? 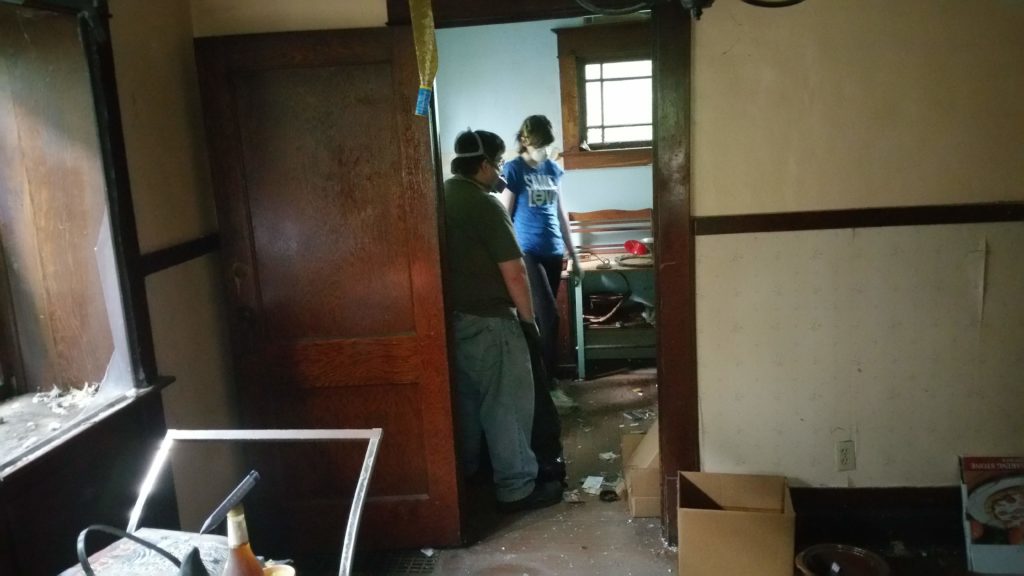 Said door, properly remounted. Dan and Hillary decide what to remove next. 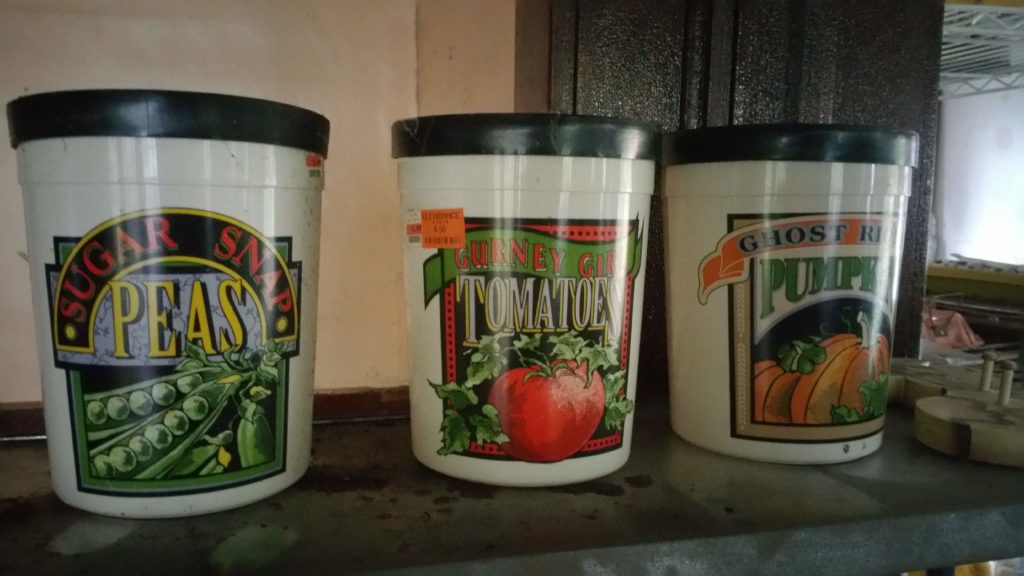 The sellers informed us that the room was plumbed up for a complete first floor bathroom at one time. And, there are holes for tub, toilet, and sink drains. But, there are no holes for supply lines. So, perhaps the intent was to install a bathroom here, and the owner got as far as drilling the holes, before covering them in lampshades and rocking chairs. Shining a light down into the basement shows no nearby plumbing. 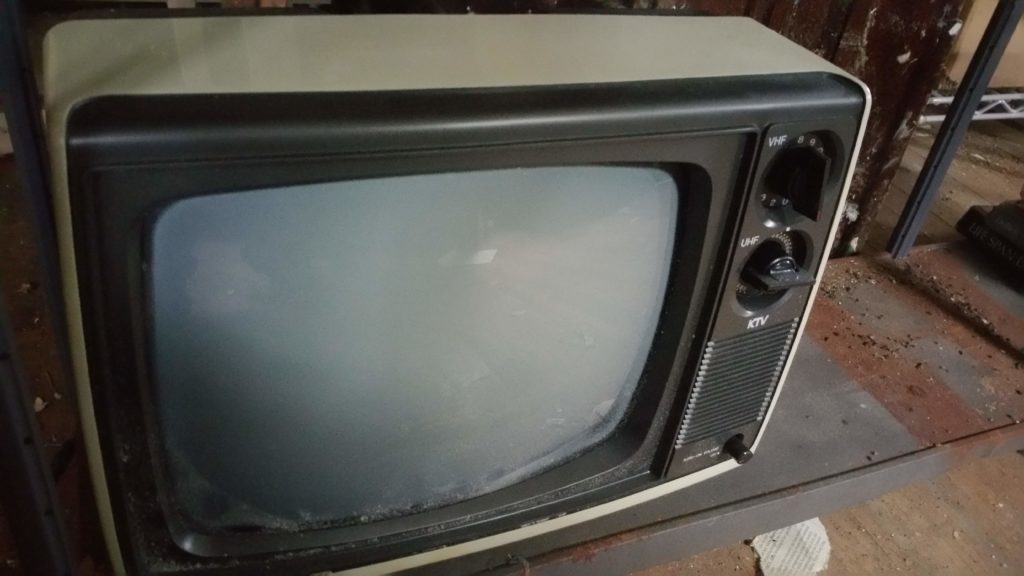 Does it still work? Was it ever used? Did she really need a 5th TV? 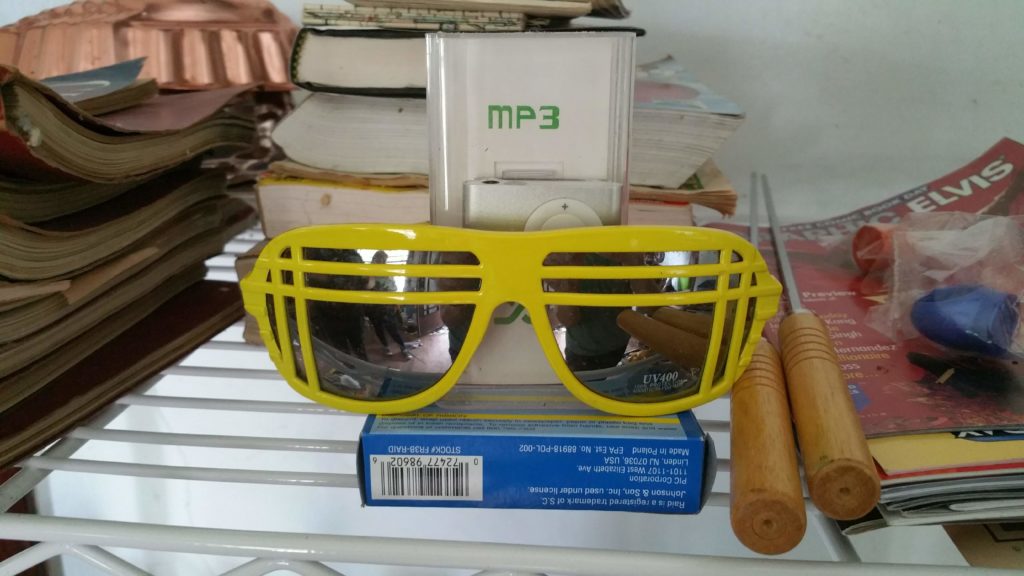 I told you they were badass. 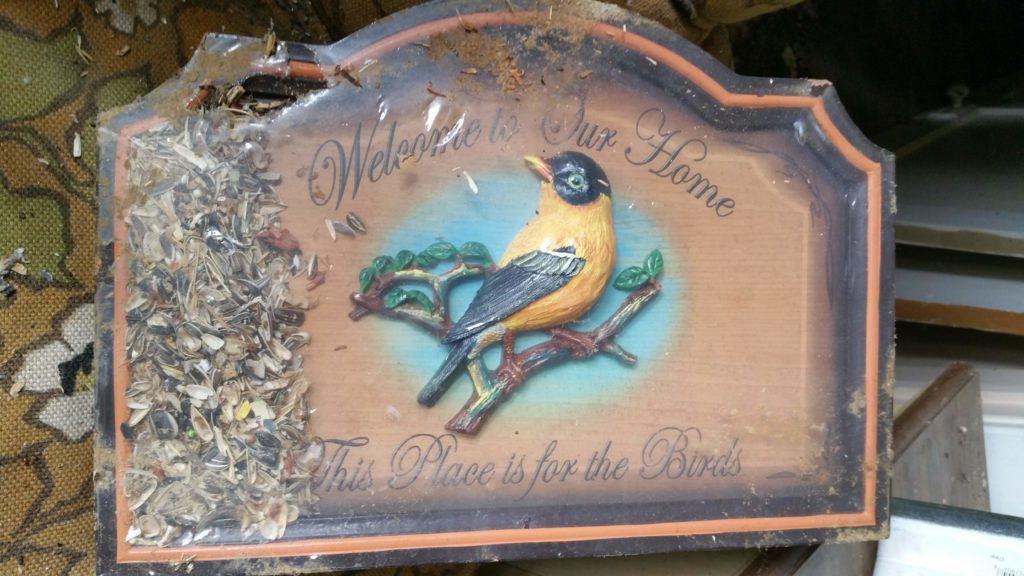 For the birds indeed. I think I’ll leave the birdseed in there.

Not really literally endless. I mean, we probably don’t need a bank vault. And who would want to clean two kitchens? I barely want to clean this one.

I was completely expecting this to be the most disgusting room in the whole house. 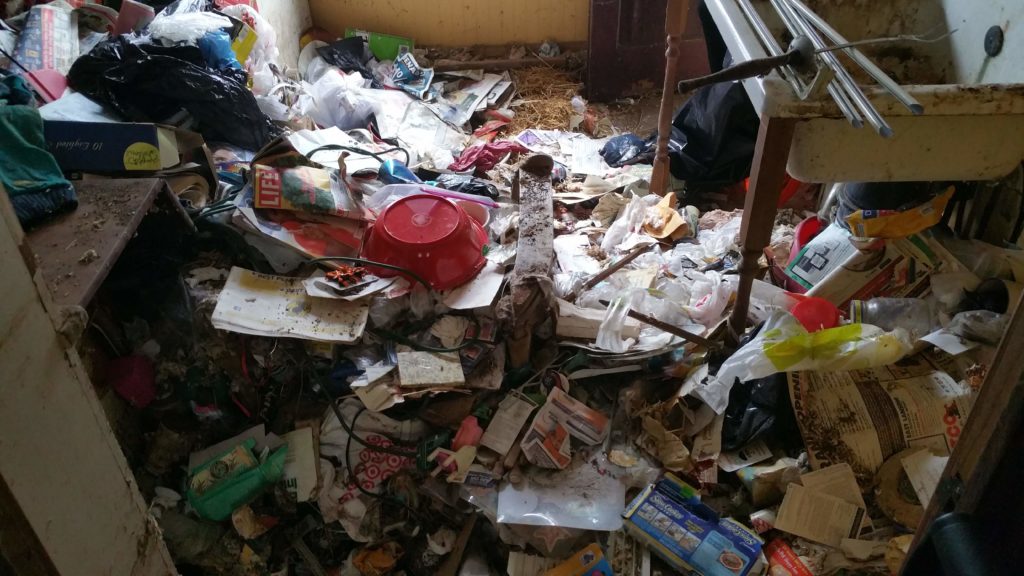 There is a recliner under here. Trust me. 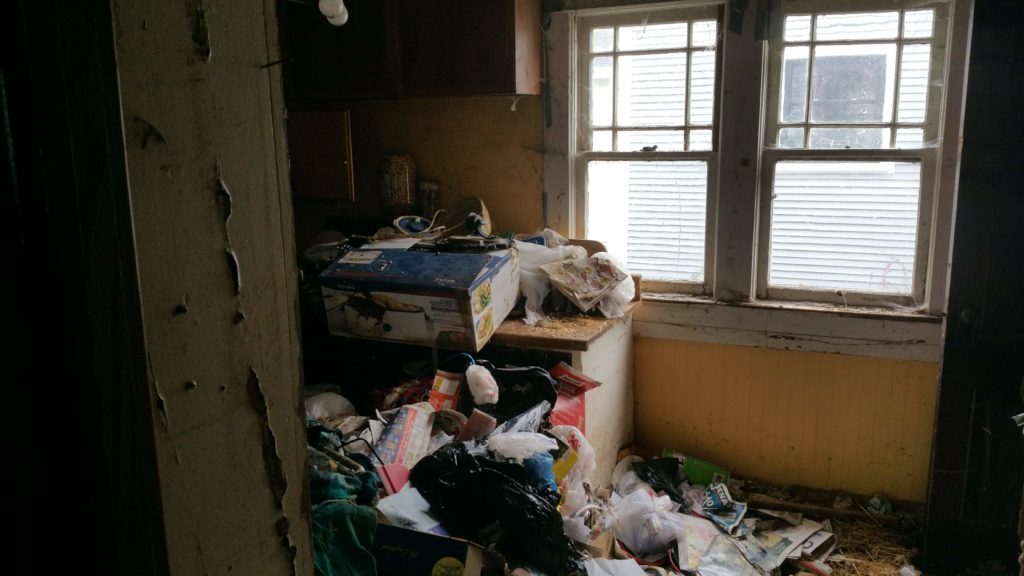 Removing the dog crate made entering and exiting much easier, and tackling the rest of the kitchen slightly more palatable.

After removing said dog crate and said kitchen recliner (so you can watch your meals microwave comfortably), we were left with a wonderful little entry aisle for accessing the house! 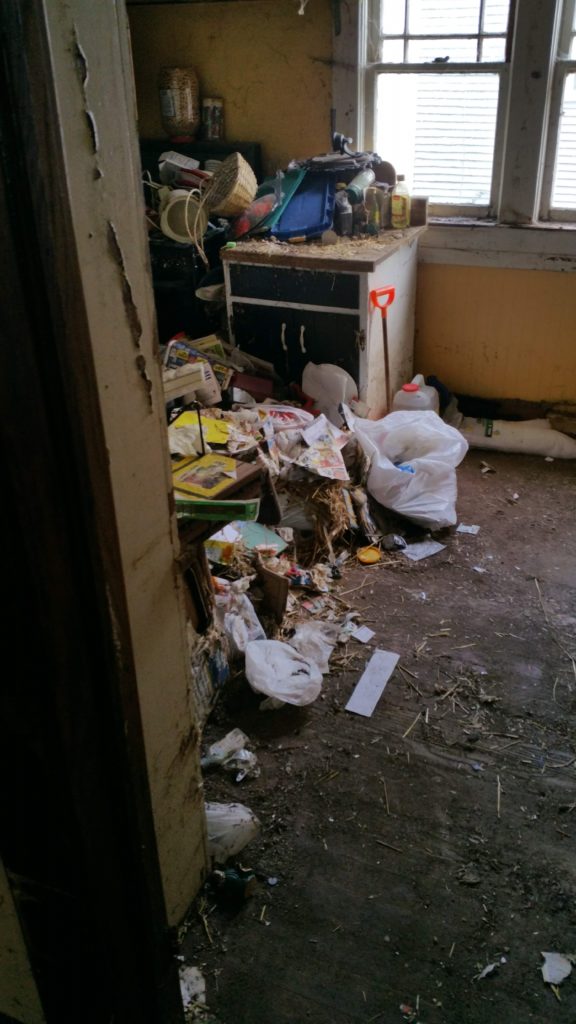 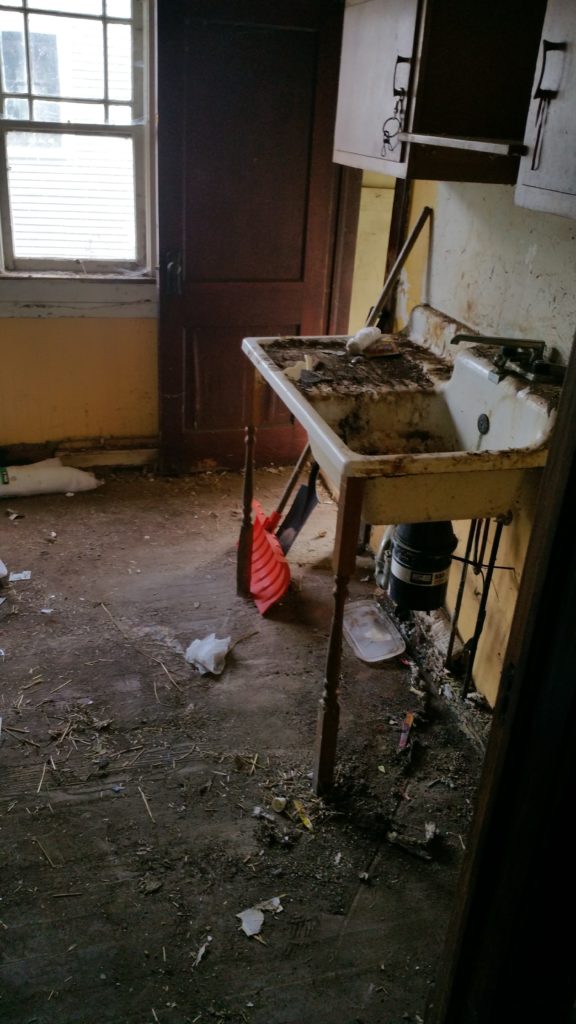 The sink is pretty charming, if it could be saved.

The floor, as you can see in the pictures above, is in pretty bad shape. The pine boards have degraded so that the soft rings of wood have turned into dirt. The dirt dusted on top didn’t help much with keeping the floor protected, nor did the layer of straw on top of that. All of the boards in this area are so soft, you could stab them with a screwdriver.

The sink is a nice cast iron model with a drainboard, but it is pretty badly rusted and need enameling. 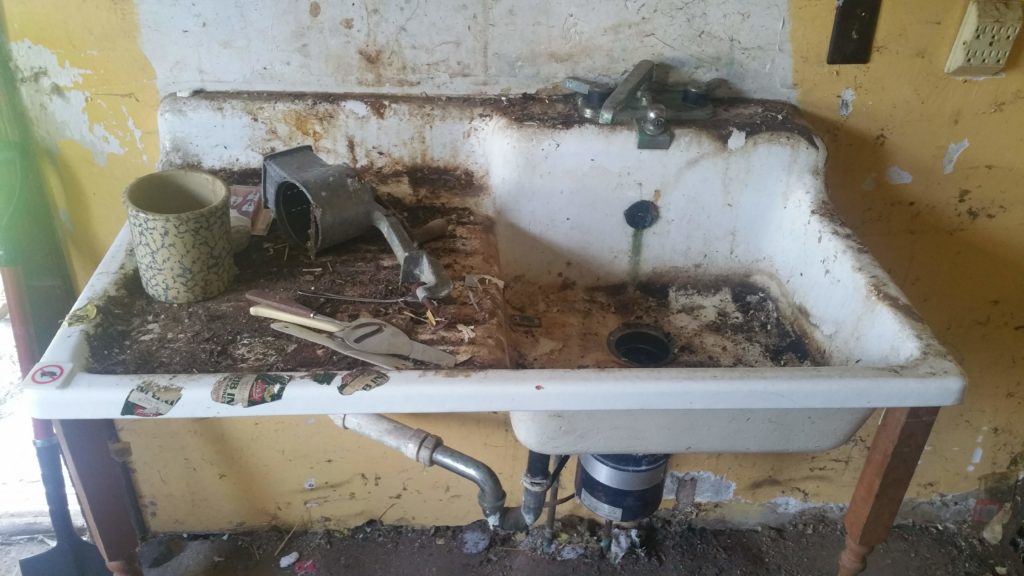 Bar Keeper’s Friend might not be enough in this case.

The owner knew that it needed to be replaced at some point, because nearby we found a complete new steel sink, in the box. 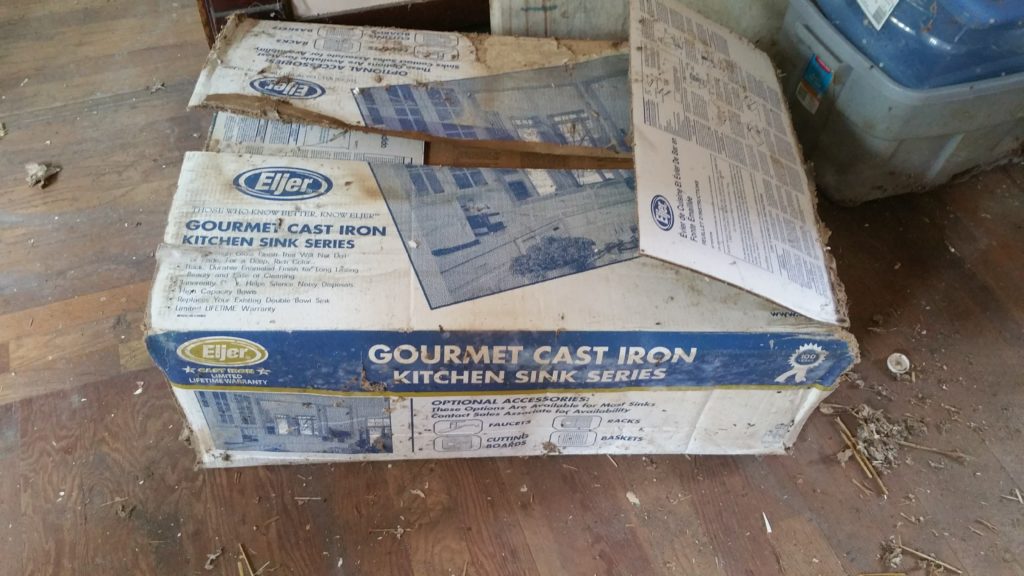 The sink also hid an interesting slab of marble. Could it have been procured for candy-making? For ice cream rolling? Because it was just a really good deal? The world may never know. 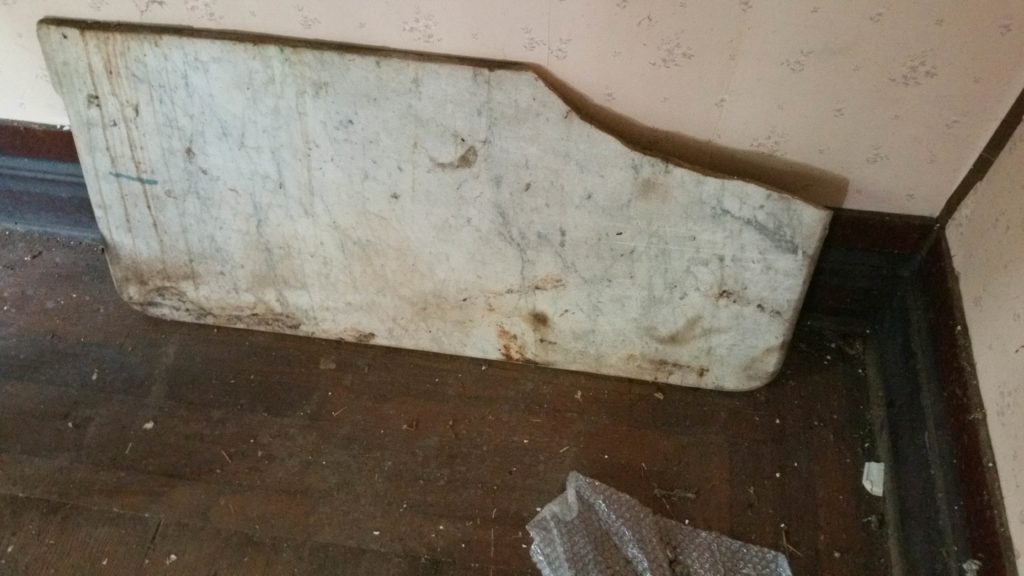 Gonna keep it anyway, for my ice cream rolling franchise.

We called it a day at this point, since it was getting late. Unfortunately it was all still waiting for us upon our return. 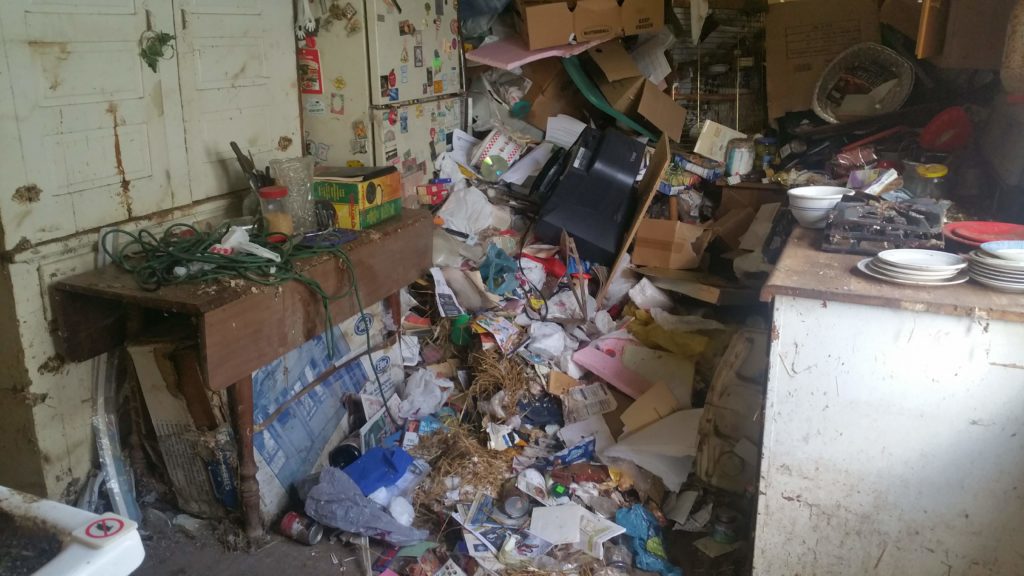 Arguably better than creeping over two feet of newspapers.

Way was made towards the pantry by removing the drop leaf table, which became a drop kick table. Into the dumpster. I’m really reaching with that one, but I’m not sorry. 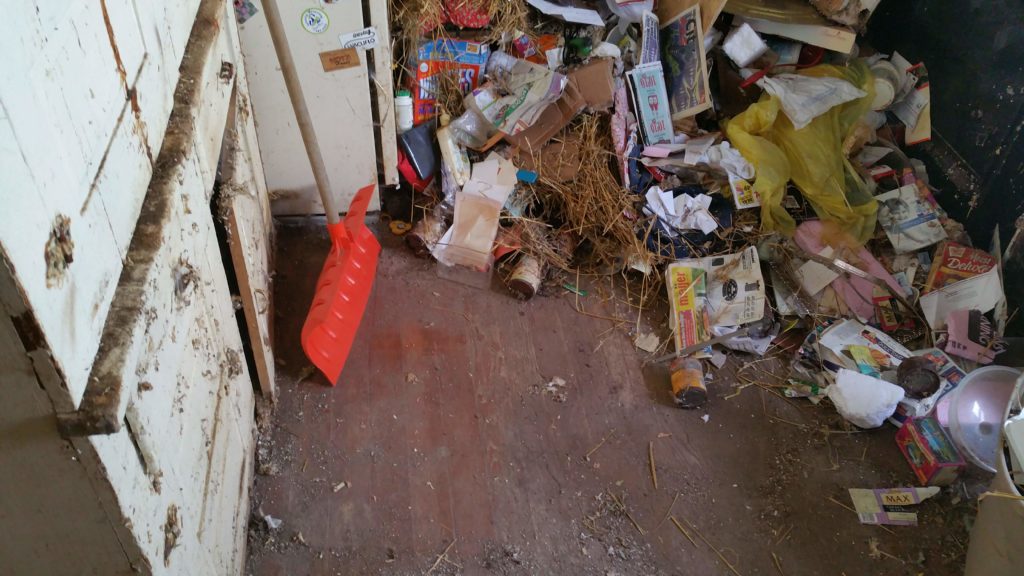 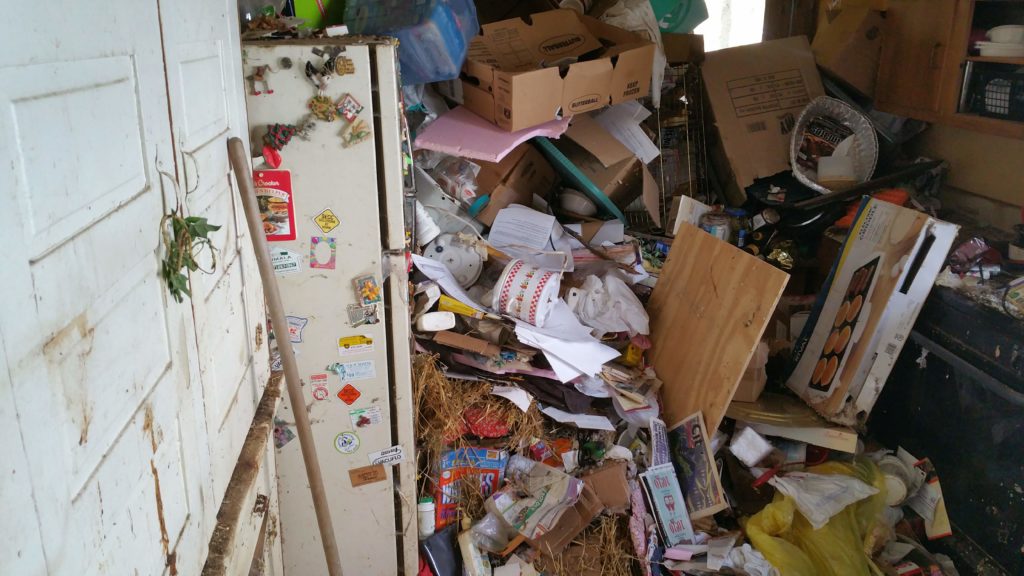 Inside the pantry was an array of canned and dry goods, as you would expect, but all of the boxes, bags, and tins were torn, degraded, and rusted away. 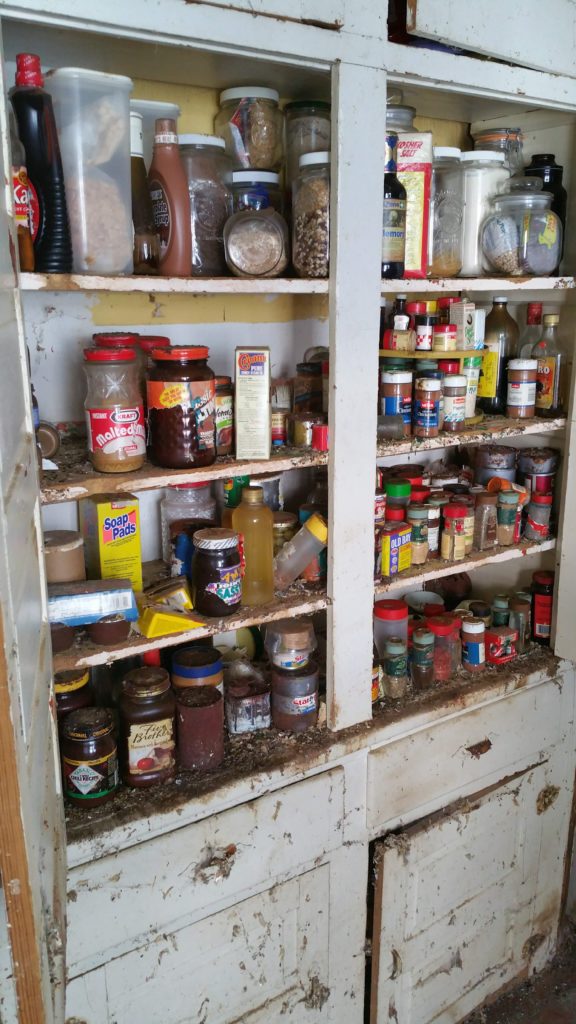 Nice, we were running out of Old Bay.

These jars and cans were carefully tipped into a waiting bin and shuffled to the heap.

As you might be able to tell from the image above, rat poison was interspersed with everything in the cupboard.

What does that say about the decision making process of our hoarder?

A symptomatic fix was applied, treating a symptom (mice) vs treating the source of the problem (poorly sealed food). This same decision making process shows up through some of the other objects found in the home. As I mentioned earlier, numerous items were purchased with the intent of performing upgrades to the house. The kitchen sink above, for instance, or the wealth of home improvement and kitchen design magazines. But these were pipe dreams (yuk yuk) if the actual cause of the dissatisfaction with her living space was addressed; the massive quantity of stuff.

Another treatment was applied here as well. “If I only had organizational and cleaning tools at the ready, I would organize and clean!”, she thinks. I must have thrown away more than 15 shoe organizers (with or without shoes), a dozen rolls of paper towels, a hundred books on living an organized life, and countless other storage solutions or cleaning supplies, some still in their shopping bags with their purchase receipts, and all unused. It is no good to have the best of intentions without follow through.

This is the literal representation of the analogy that some apply (with questionable accuracy) to the national debt ceiling.

The room is filling up with trash. Do you raise the ceiling (fight the symptom), or remove the trash (fight the cause)?

Bits of missing ceiling plaster show that an attempt was made.

But I digress. We have trash to remove.

Alright Pavlov, back to the kitchen please!

Through the hard work of our hard workers, we made it to the middle of the kitchen without much trouble, uncovering a few very interesting artifacts in the process. 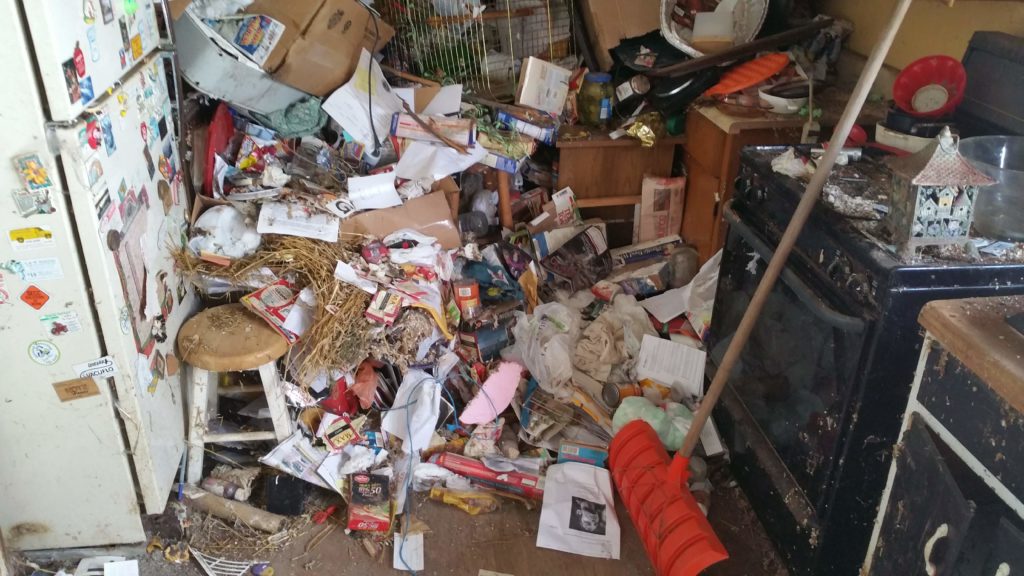 Luck strikes again; there is furniture under here!

I really like finding large pieces under the piles, because it’s so satisfying to pick up a bulky piece out of the surrounding heap and immediately make your way down to the floor. It’s like passing GO and collecting $200.

The stove to the right is a gas model, which is interesting because the antique version I spied in the basement was electric. 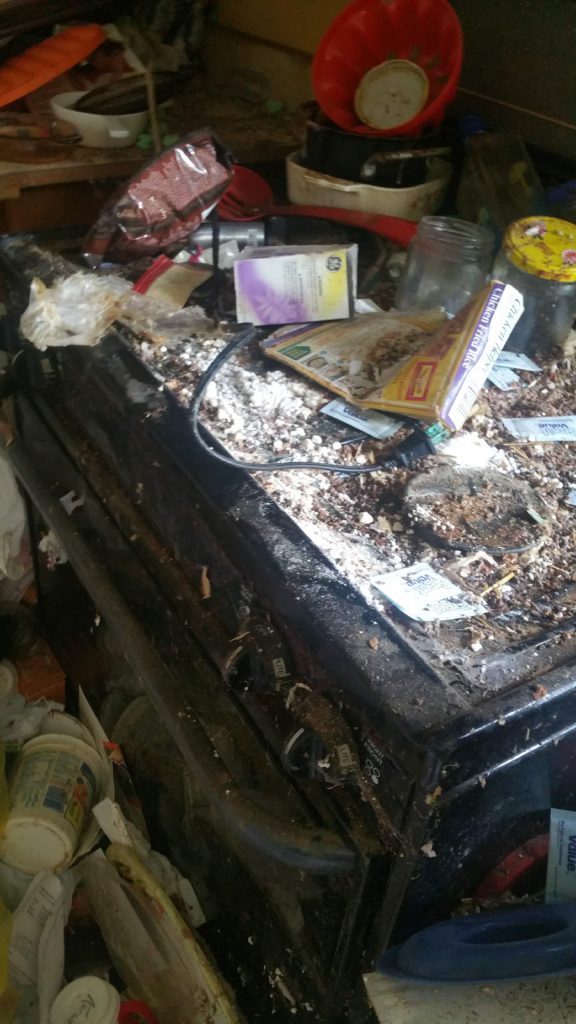 It’s a good thing the gas meter was removed a while ago. 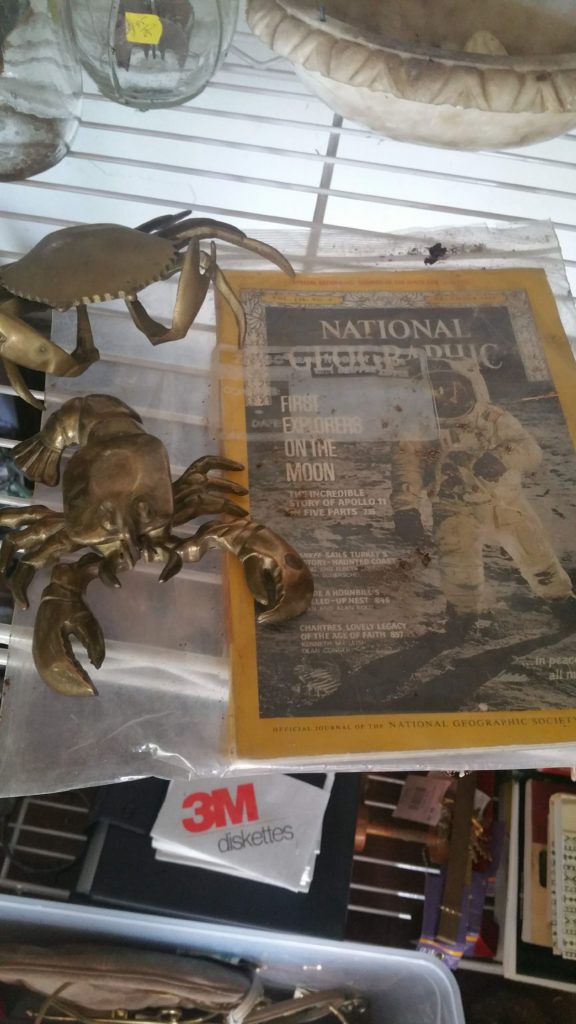 Crab shrug! I believe those arms are mounted incorrectly… 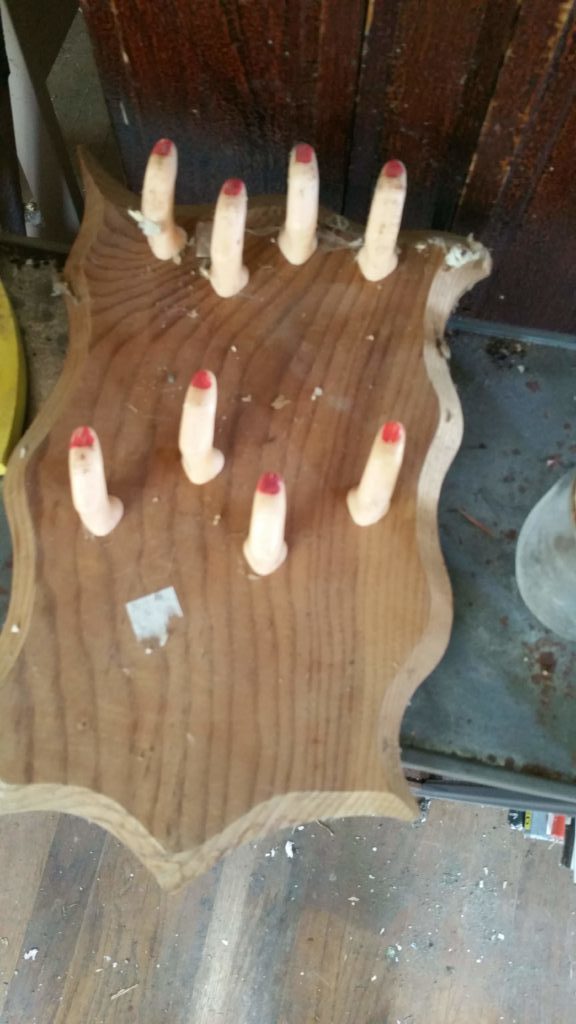 I really don’t know where you would buy individual plastic fingers to construct this abomination.

We made our way at last to the other end of the kitchen. I had to put a small stool in front of the fridge so that I wouldn’t accidentally open it. 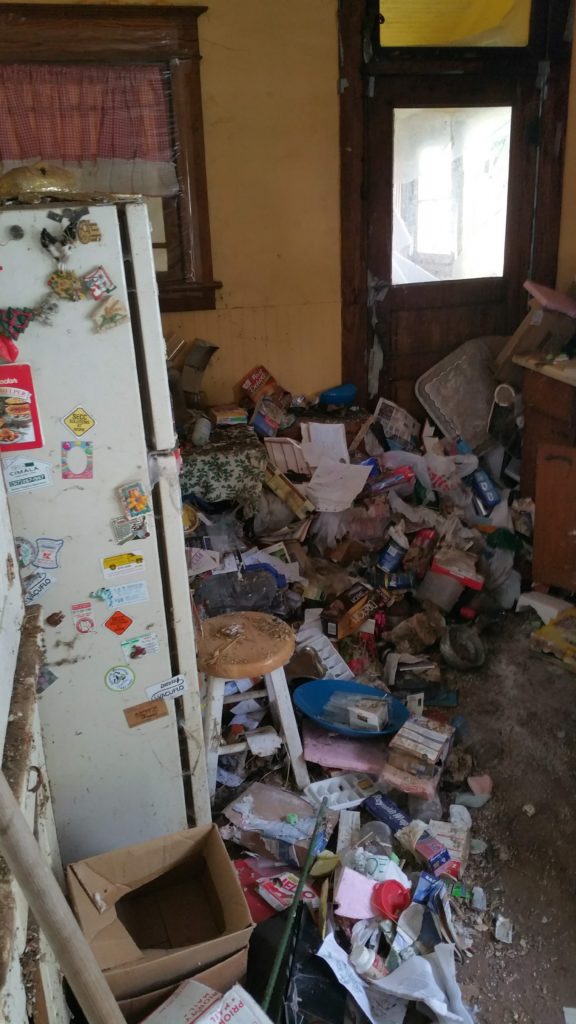 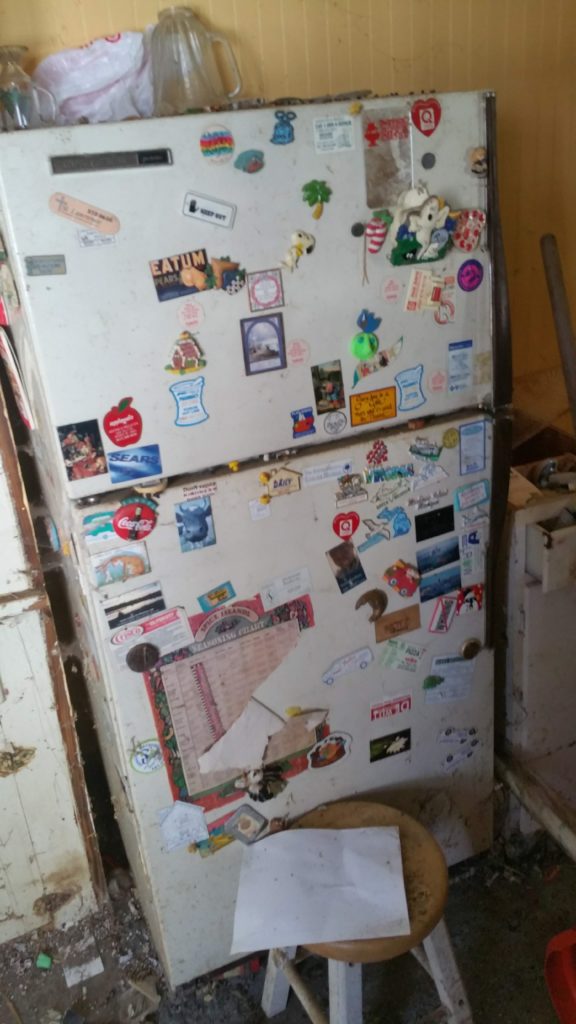 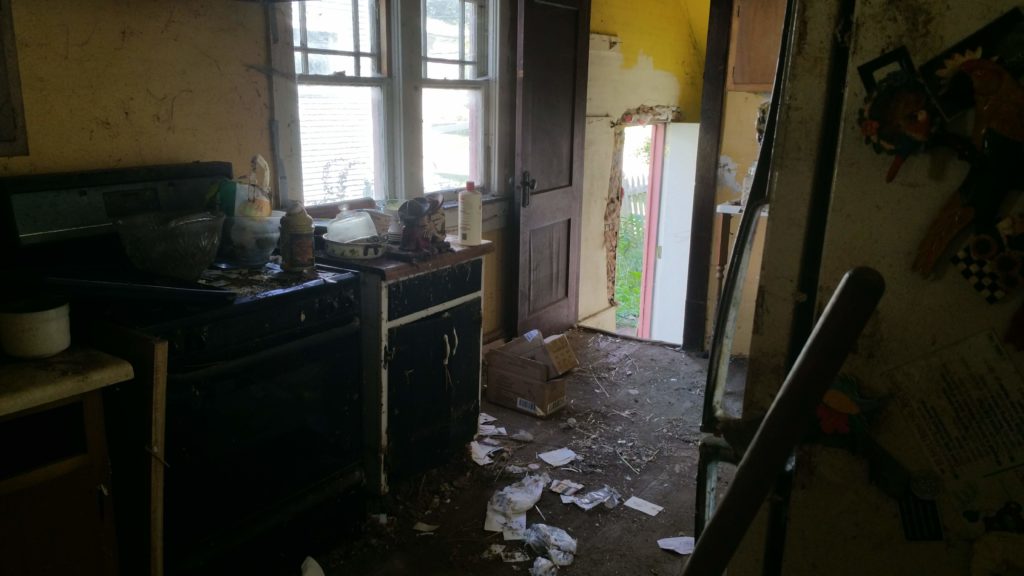 No one has stood here for at least 15 years.

I was satisfied with the end result, but it was decided that more could be done, and since there was a sufficient number of strapping lads available, the stove was torn out and placed by the curb. 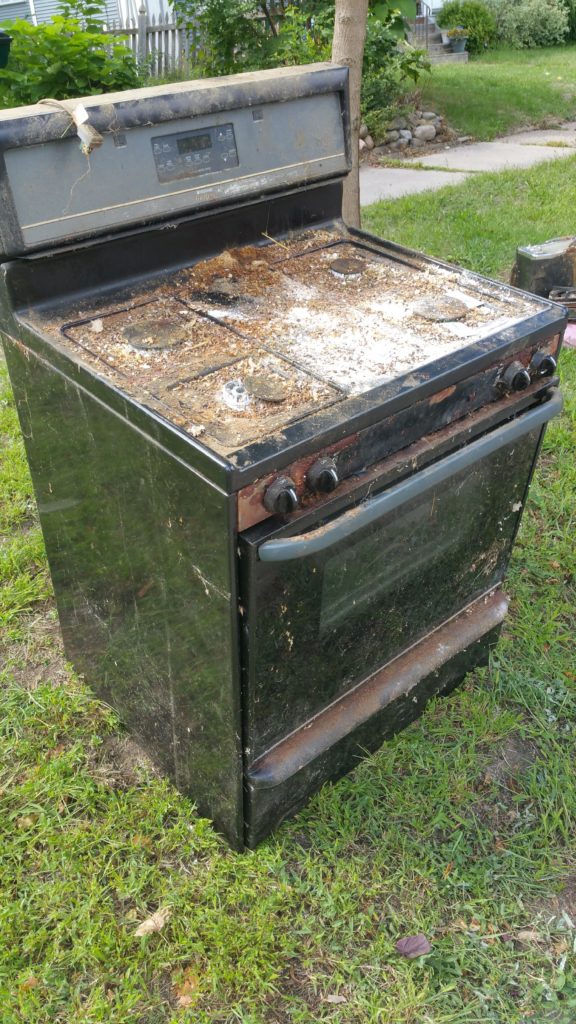 It may be true in most parts of the country, but around here, scrap metal doesn’t last but 30 minutes in the open air. The range was gone, taken by a scrapper, by the time we returned from a quick dinner.

I told you it was coming, and it’s just a bit further, but first a bonus room for you quick scrollers. We started in on the bathroom, which was, if possible, even more disgusting than the kitchen. 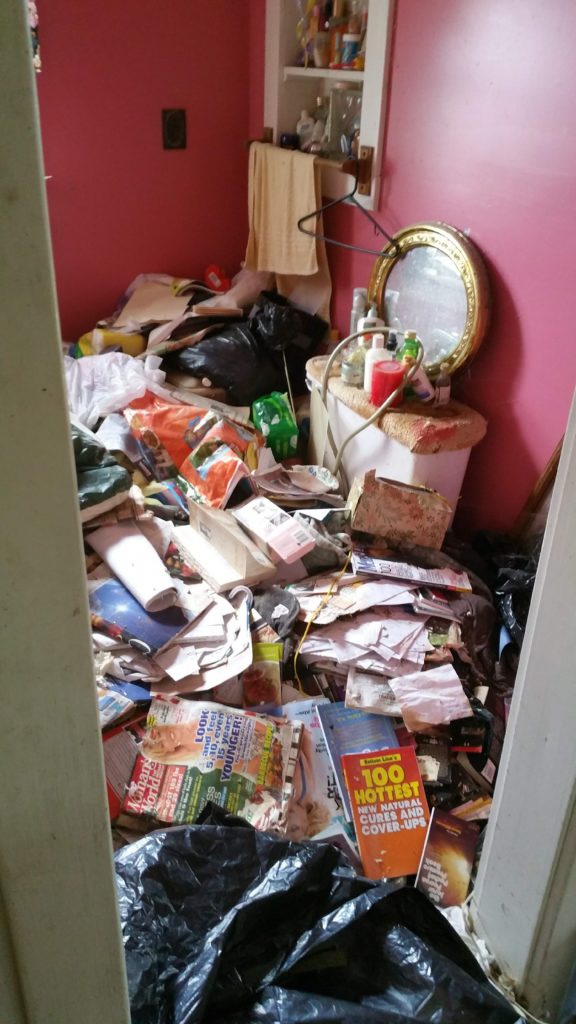 100 natural cures, appropriately placed in the bathroom. Featuring cures such as: fight your arthritis pain by drinking water. 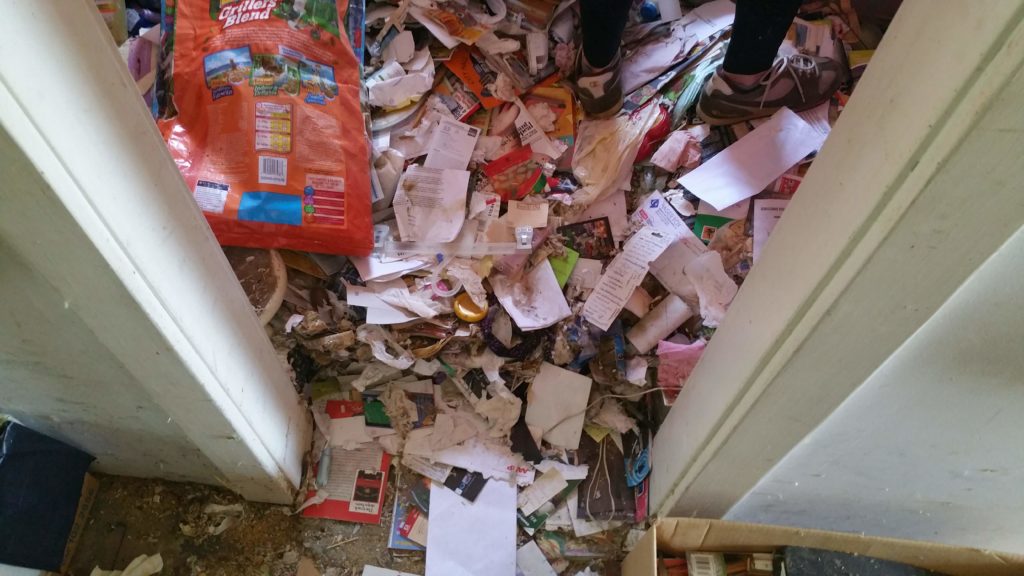 This seems to be loose, but it is in fact very difficult to shovel because of interspersed sheets of paper.

Why do I say it was more disgusting?

Well, the owner basically treated it as a trash can for her trash hoard. Dirty tissue? Toss it towards the sink on your way by the room. Finished with that tampon applicator? Just throw it on the pile, no need to dispose of those properly. Don’t like that mascara wand? It’s cool, put it with all the other stuff in the bathroom.

Seriously, like, 500 tampon applicators so far. I really hope that clawfoot tub has claw feet.

But that’s a discovery for another dumpster, because we are TOPPED OFF.

Next time on This Old Hoard

Our next plans are to dig into the basement, because winter is coming, Jon Snow.

If we want HEAT and LIGHT through the winter, we have to make our way to the furnace to see if it is in good repair. We then have to supply the furnace with electricity, which means we have to get to the breaker panel and check its condition, as well as disconnect any questionable branches. Which at this point is all of them.

And, we have to supply the furnace with gas, and since the kitchen stove was… stubborn to remove, there is now a broken line in the kitchen to contend with. So, that system will have to be replumbed.

Finally, for both gas and electricity, both meters are disconnected, and service has to be restored.

But before any of that can happen, we need to bucket brigade these damp boxes out of the basement and into our fourth 40 yard dumpster.

The Dog Crate (for real this time)

You have had enough time to look away at this point. 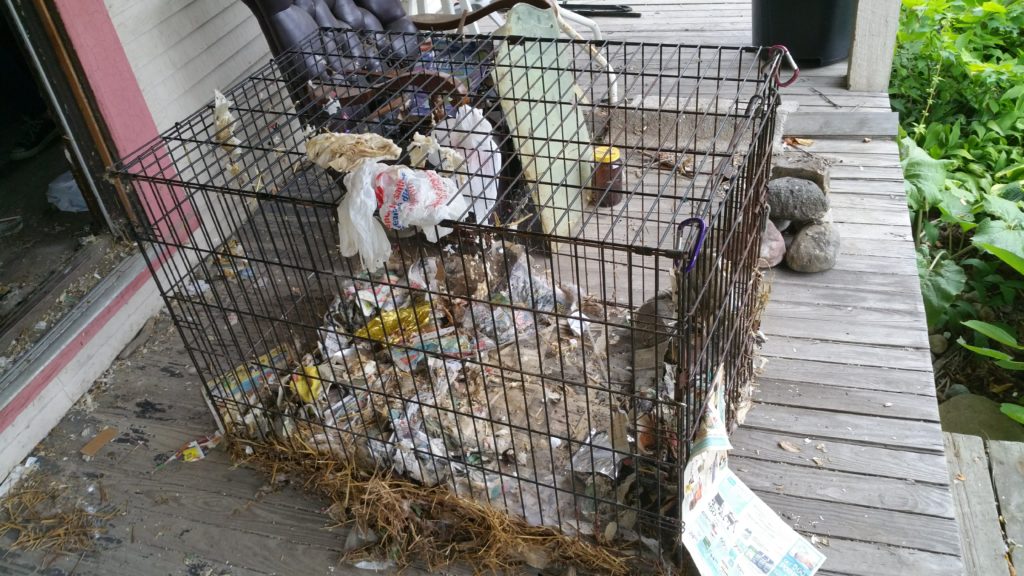 Yes, a dog (Rufus) lived in here. Without heat, I’m pretty sure, through at least one winter. With no running water in the house. Caged up whenever the original owner was away. And for reference, she likely did not sleep at the house.

Another attack at the symptom (dog has no water) instead of the cause (my water got shut off). Our old owner would return to the house once or twice a day (hopefully) to bring in jugs of water for her dog. Though, now that I am thinking about it, there was a strong possibility that she was also bringing in water for a very long time for her other animals, since we did find gallon jugs of water throughout the house (particularly in the bird room). It is a bit of a shock when you are clearing away trash and suddenly pick up a gallon of water with no lid.

I had called animal control some five years back, because every time the owner came to check on the dog, it would go outside and she would go inside to do God knows what, and the dog would bark for what seemed like hours.

As soon as I put two and two together in the spring that, yes, she was leaving the dog there, and yes, the gas meter is missing from the side of the house, I put in a tip to the non-emergency line and suggested that they come check up on the conditions for the dog (I had no idea the quantity of hoard in the house at the time).

The showed up the next day with three patrol cars, took barely one step inside the house, and red tagged it. If you are uninitiated to home buying or rental, red tagged houses are in one or more ways unfit for habitation. They ordered her to take the dog literally anywhere else, and never to bring it back. I was honestly surprised when they let her put the dog in her truck and take it away.

True to her word, I never saw the dog again. But I learned from her family that the dog died only one week before the owner did, so it lived a supposedly happier five years more since it left.