Surprise! I didn’t know we would have two disgusting buckets of rotten food to show you!

Since we had the fridge under our belts, and the back of the dumpster was already open, and the dolly was on site, we decided to put the freezer out in this round as a priority.

But first we have to get to it. 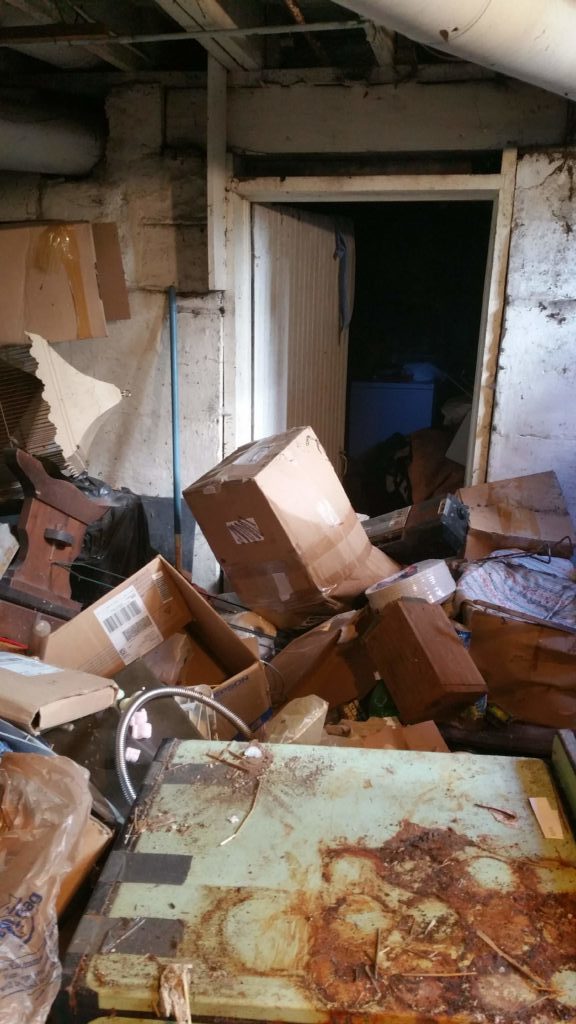 Just a wee bit of stuff in the way. Closeup of rust on the oven.

Bringing Out The Freezer

A heroic effort was made to make a wide enough path to wheel out the freezer without hitting anything. We ended up with something close to this: 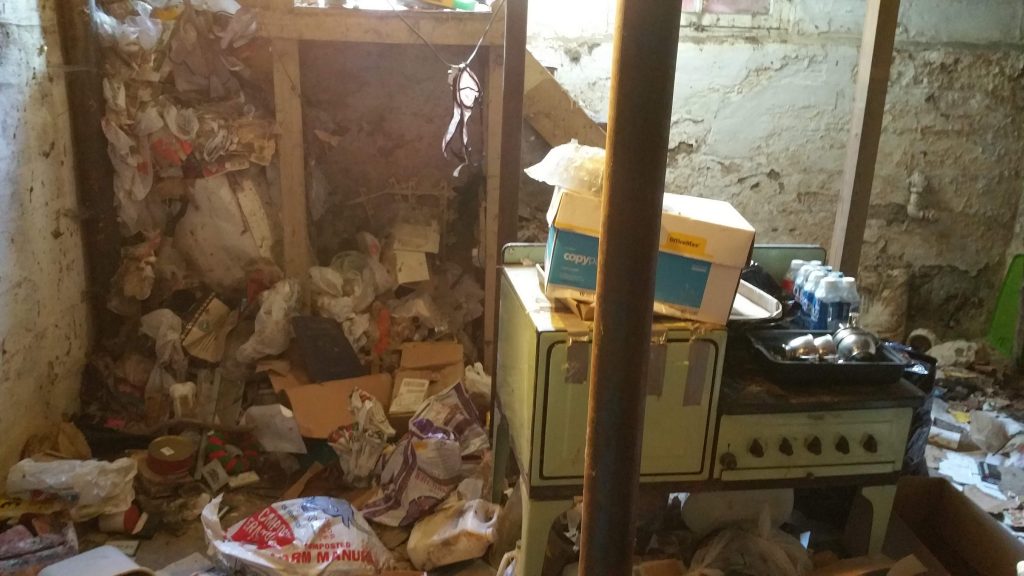 A bit bumpy, but passable.

The freezer didn’t have any feet to speak of, so we were unable to add straps to keep the lid closed before we added it to the dolly. Plus, I needed both of the straps to connect the dolly to the freezer!

So we had to bump it up the basement stairs while it was open, being extra careful not to touch the lid. Though at times, this was unavoidable.

It was extremely obvious at this point that the smell in the freezer was way worse than the smell from the fridge. We could barely stand to be within three feet of it. 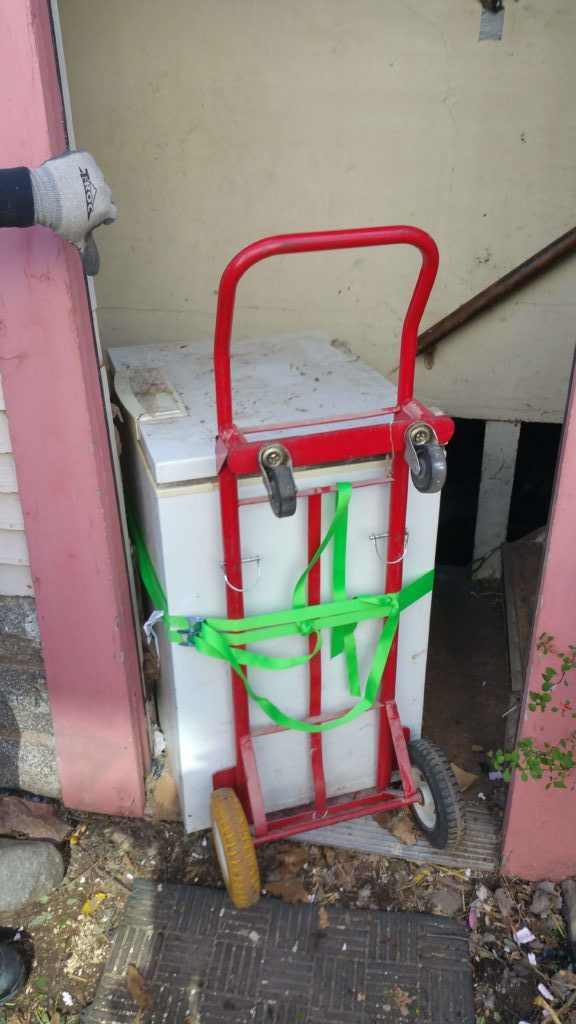 Good thing we took the side door off.

The freezer was then brought around the back path and set onto the dumpster the same way. We took a few minutes to get some fresh air, and went back in to discover the contents.

To be honest, I expected a lot worse out of the freezer than what we found in the fridge, just from the smell alone. 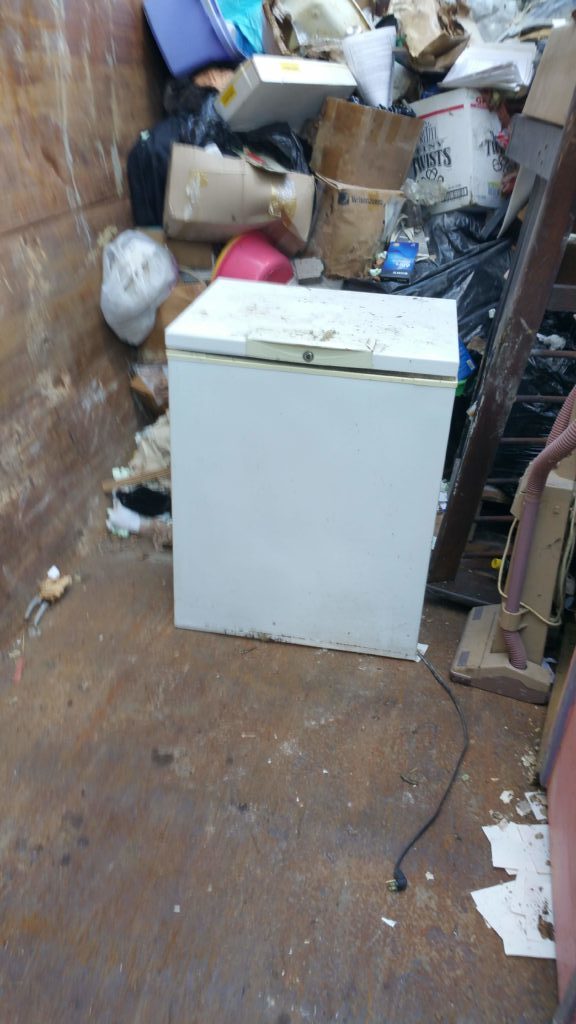 We had only filled to halfway, and luckily had floor space left.

But when we opened the freezer, there was really no visible sign of rotting or insects. Though I didn’t dare dig. Because there were obvious odorous signs.

Video has no sound

Yeah, it doesn’t look as bad as the fridge. But, the smell was completely indescribable. Mostly because I held my breath while I was adjacent to the freezer.

But, there was a lot more screaming and gagging from the peanut gallery as compared to the fridge.

I attribute this to the fact that the freezer contained exclusively meat and cheese products: lots of animal fats. Even the bugs won’t touch that stuff; just bacteria. What does that tell you?

On to the real ‘meaty’ finds.

Yeck. Again, I’m warning you that I’ll be showing pics of dead animals at the end.

But in the meantime, enjoy some additional pictures! 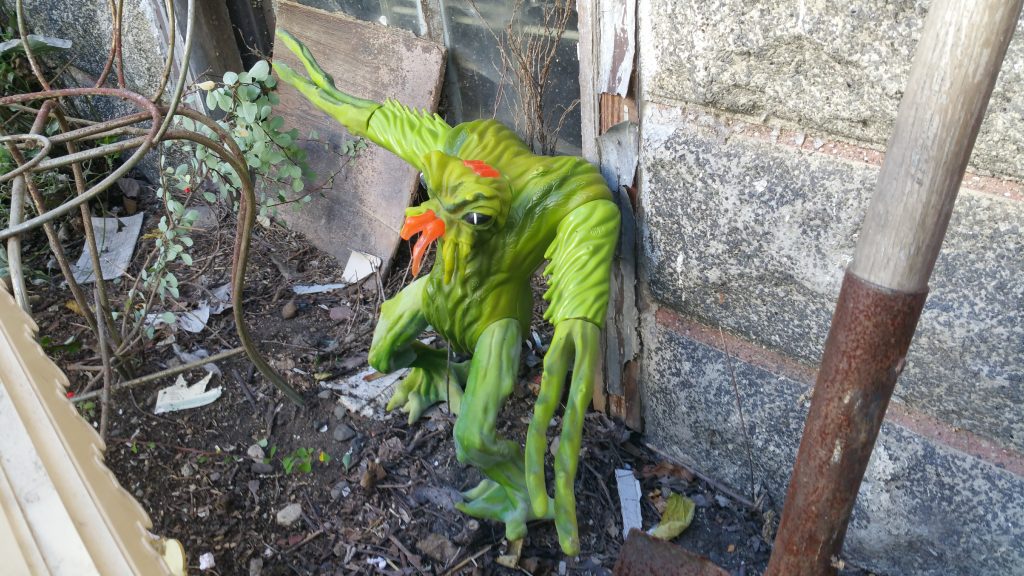 This monster was protecting… 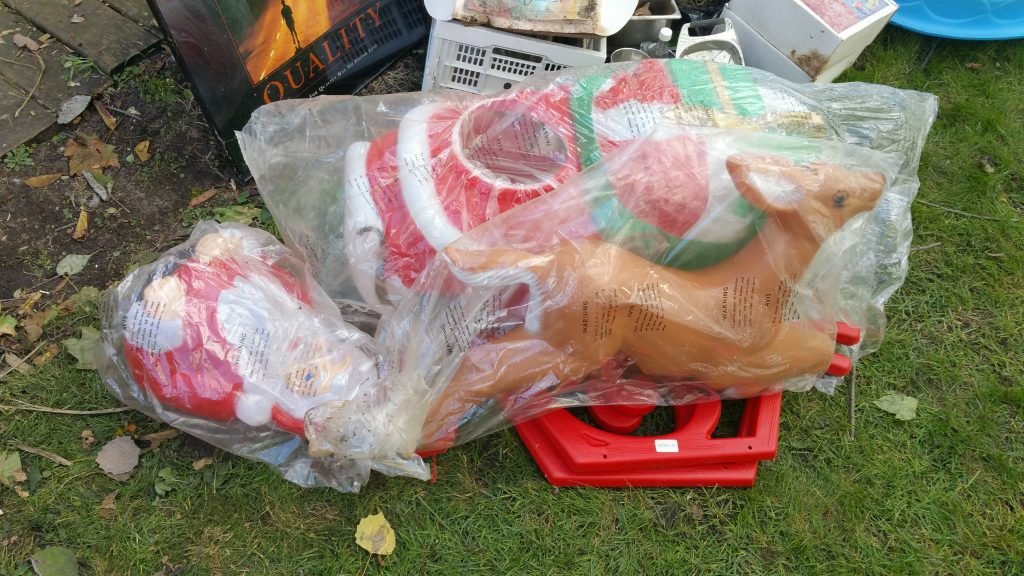 …a pile of Christmas lawn ornaments! 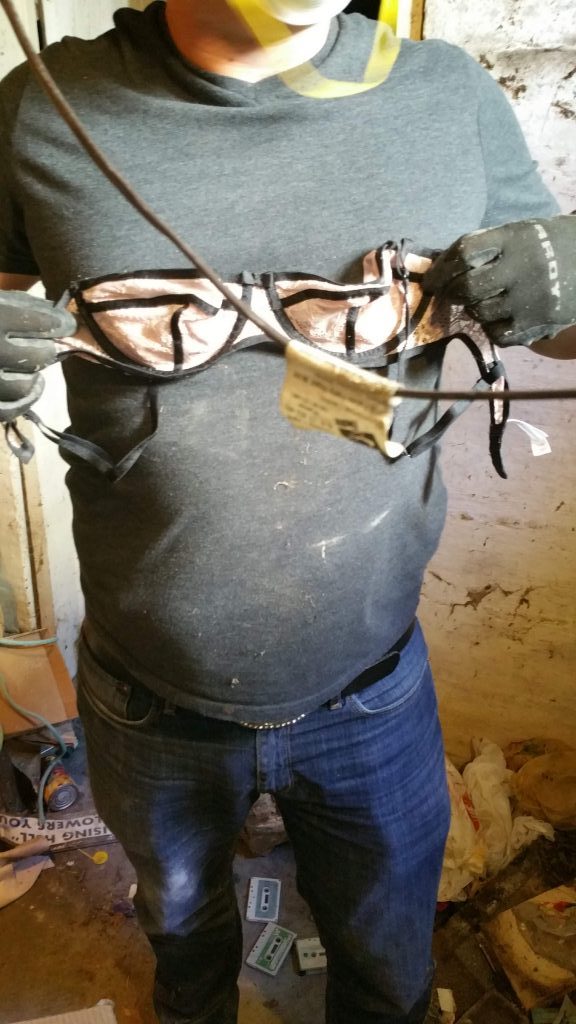 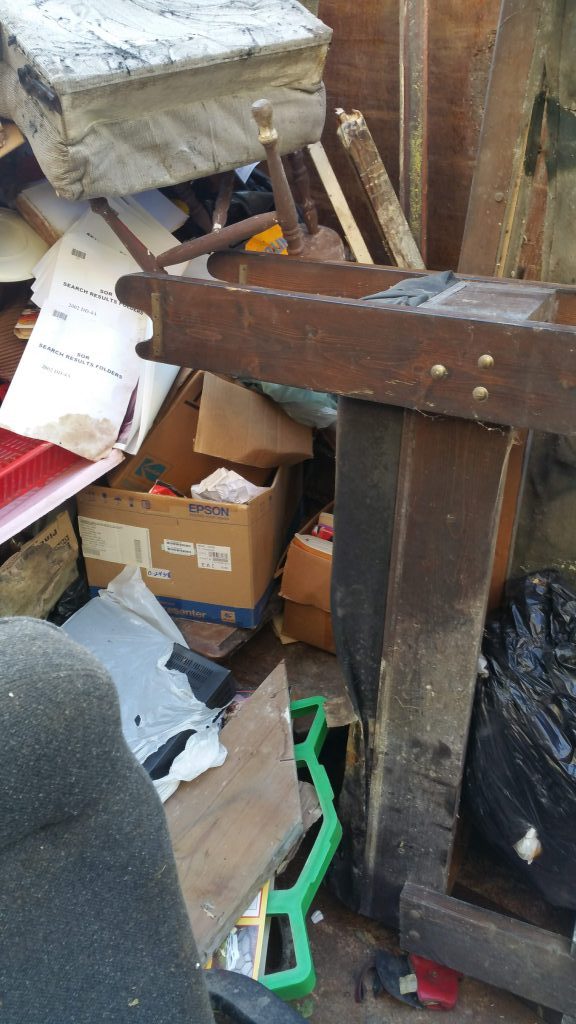 This wooden weight bench seems like it would barely hold weights. 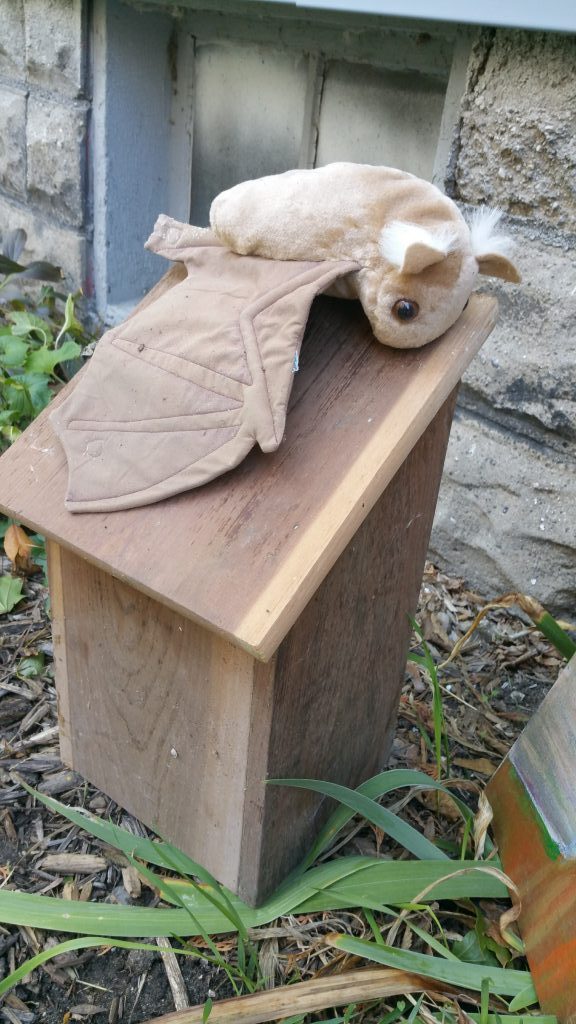 We continued the bucketing operations to bring quantities of stuff up and out via the landing, tossing the potential keeps up and into the kitchen. 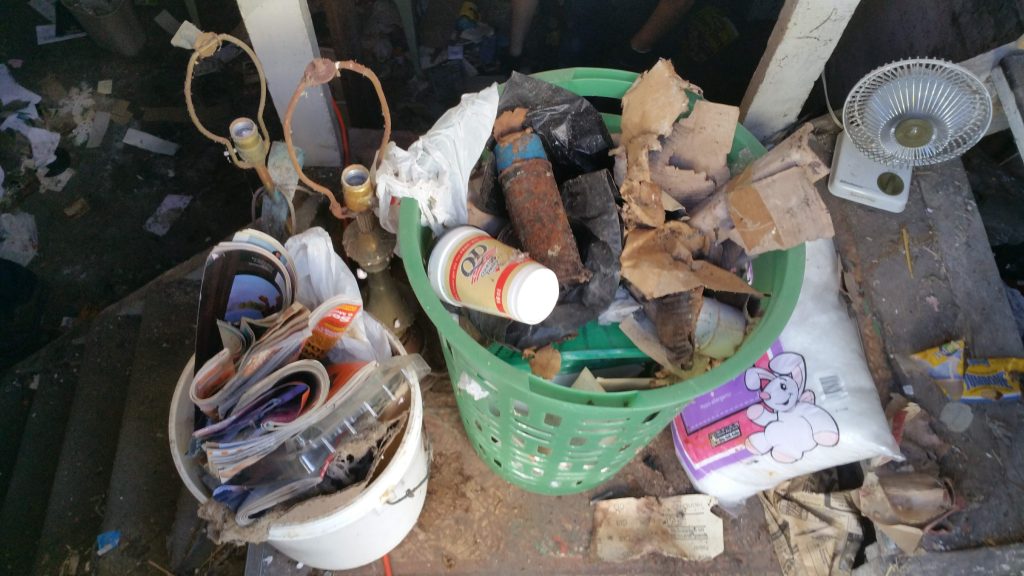 The fan did absolutely nothing to help the smell.

Since we made a path through the front room, our focus was to continue its cleanup. This included a small section of cupboards in the front corner away from the stairs. These contained, of course, food: 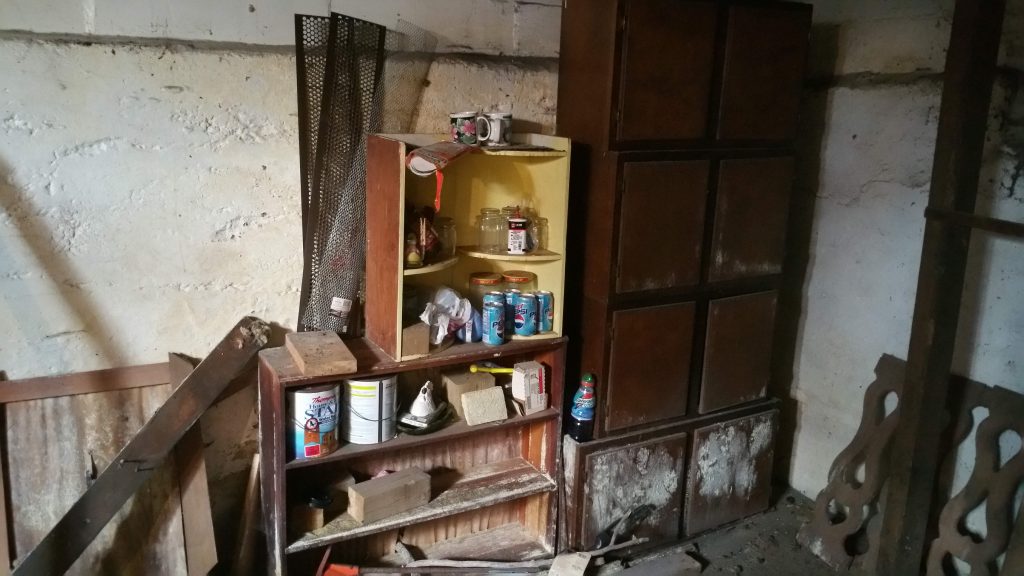 I didn’t dare open the bottom one. 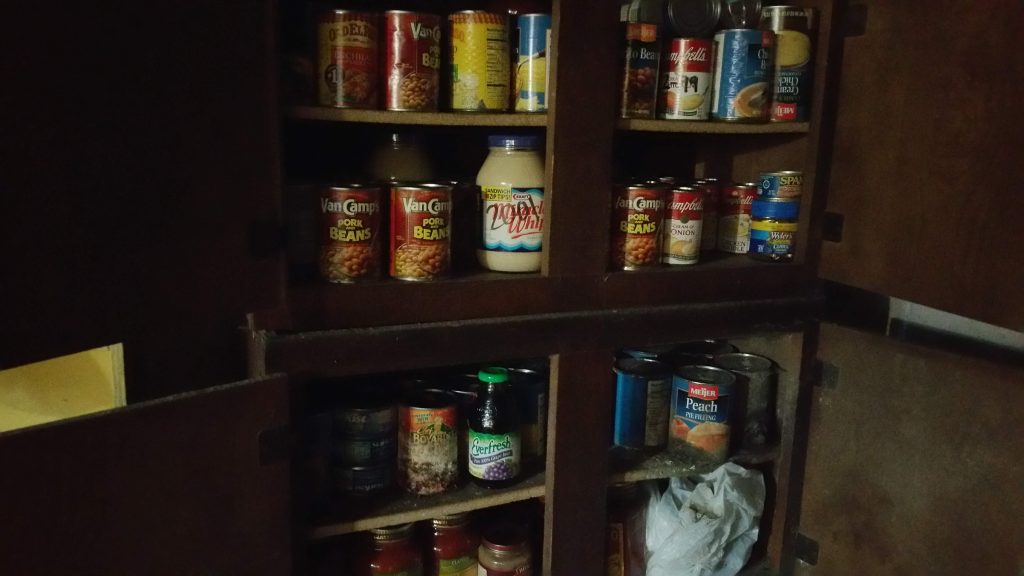 Some of these cans look OK. Other than the year ‘2001’ written on them.

Moving left to right across this wall, there are some suspicious 4×4’s bolstering a section of the floor above. These appear to be directly under the hearth for the fireplace. This likely indicates even more fireplace/chimney issues that require further dismemberment. 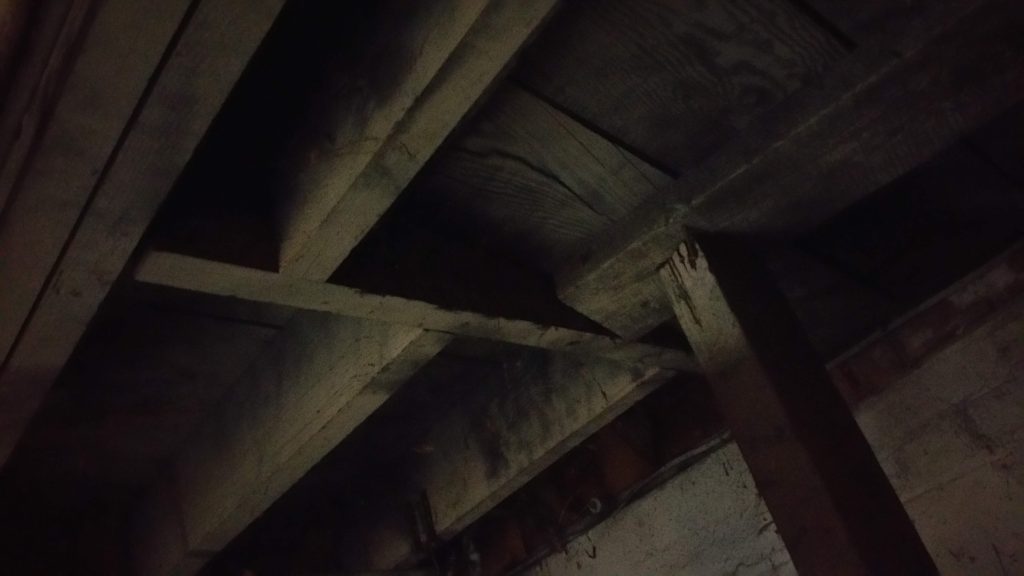 Why is the subfloor slanted?

The furnace is also positioned nearby, and hooks into the now blocked chimney for ventilation. 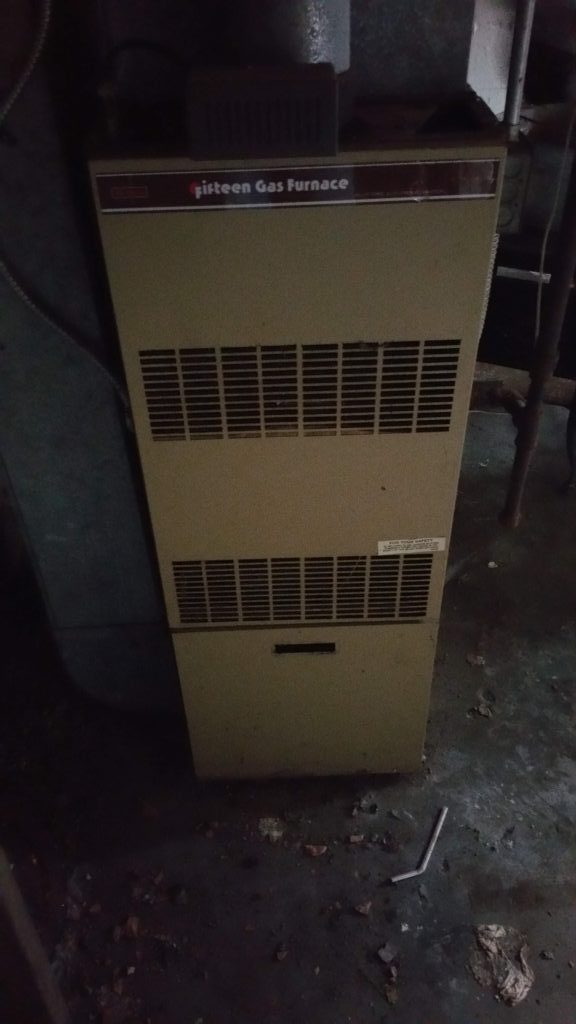 The trusty Sears Fifteen. Looks like it might turn on, but probably less than 70% efficient at this point.

The water heater finishes up the wall on the other side of the incinerator, and its warranty notes an expiration date of 1987. 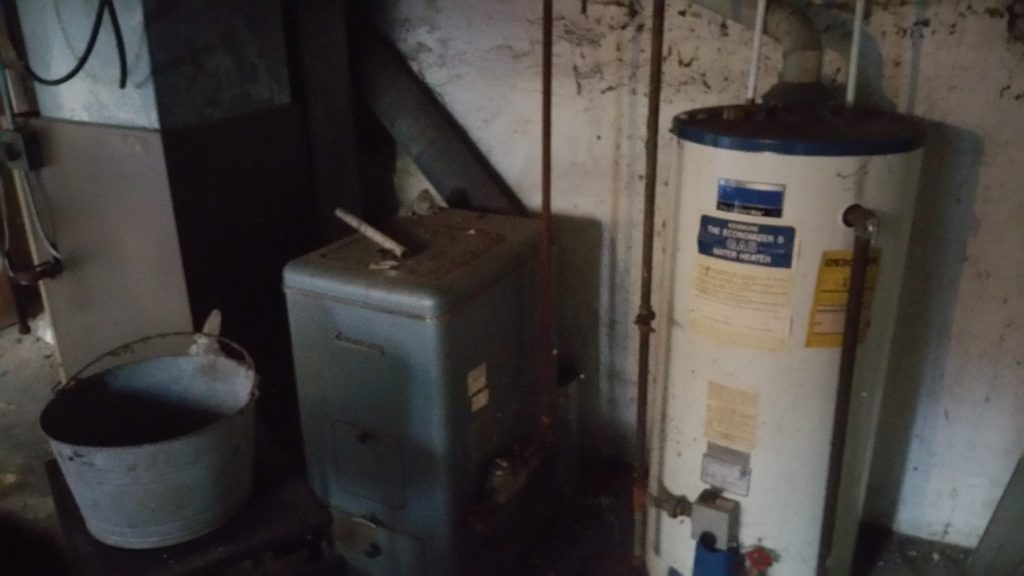 I want all of you out of my sight.

I can barely even call it that. We found a locked box of cassette tapes. Guess what was inside? 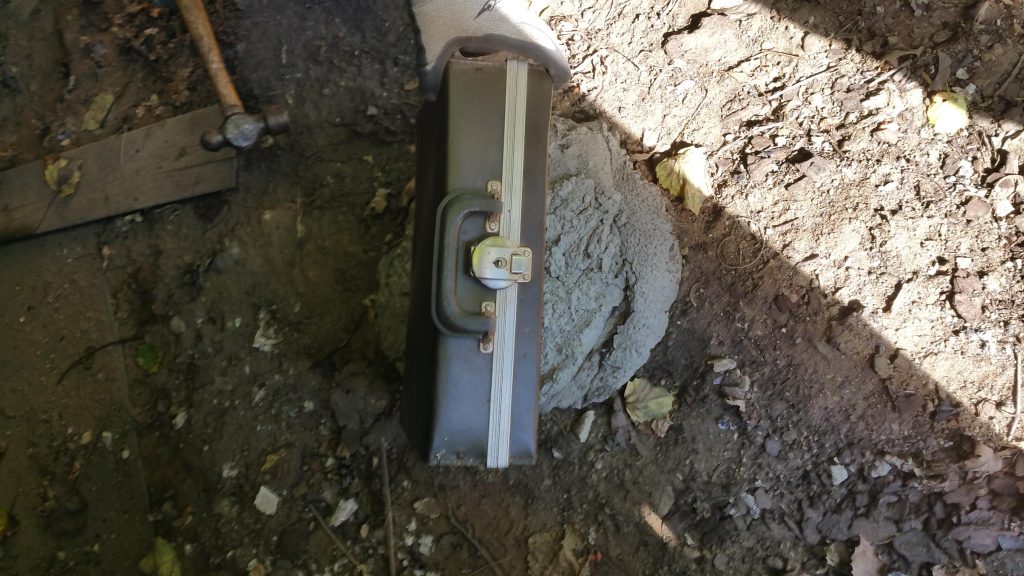 Lucky this concrete pad was here. 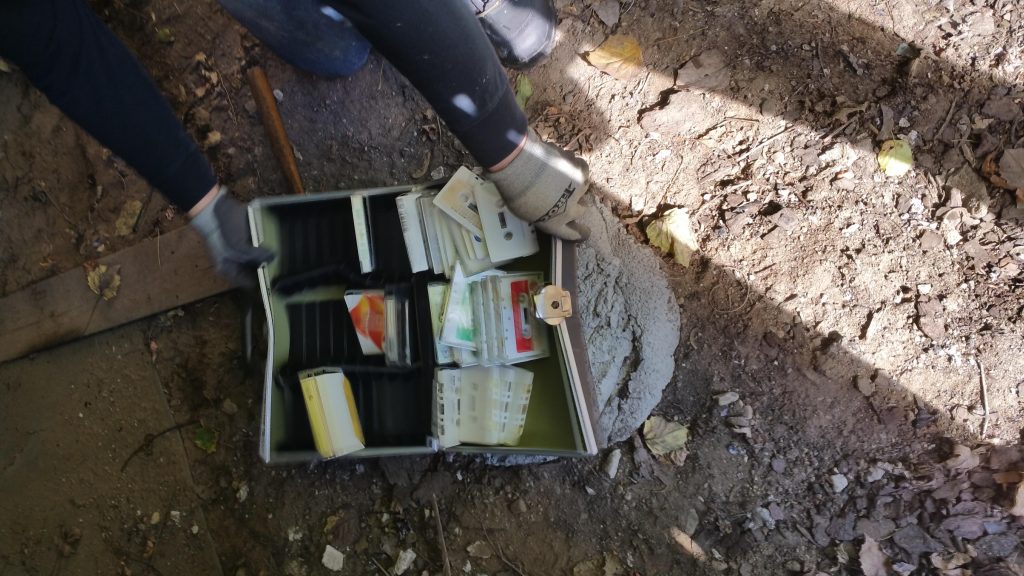 Used to be a nice case actually, crushed velvet interior and all that. 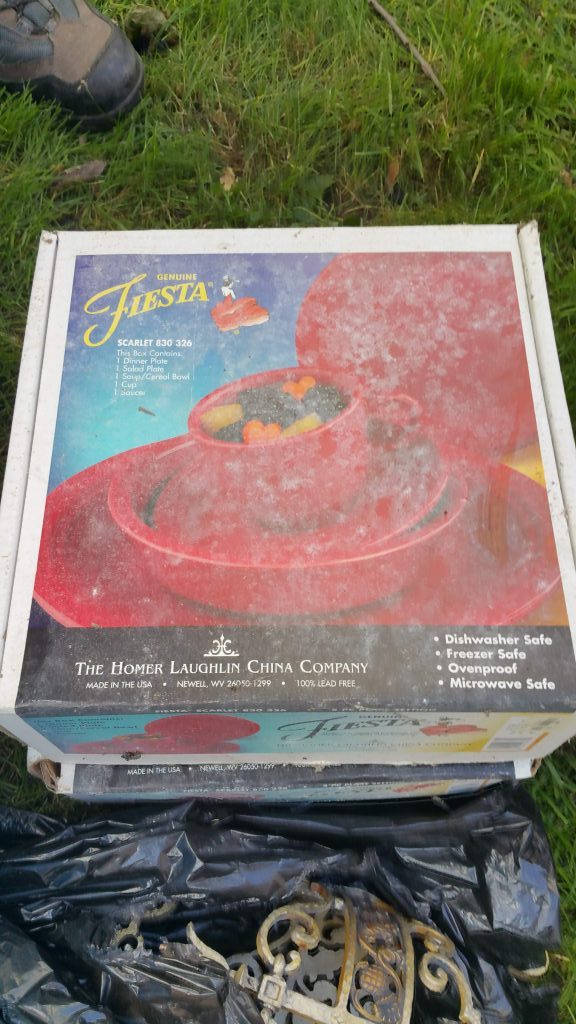 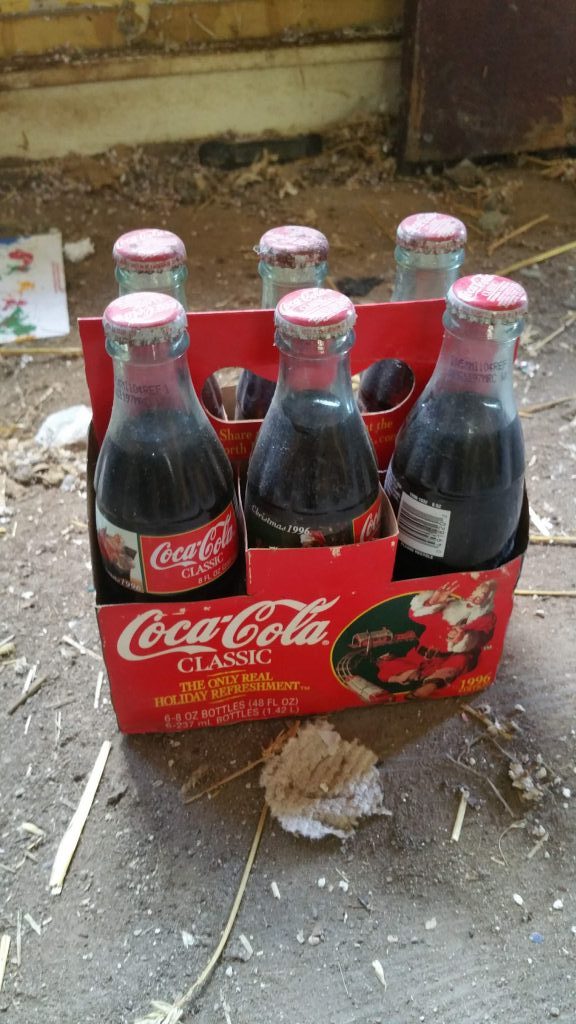 Classic Coke; you can’t even get that anymore. 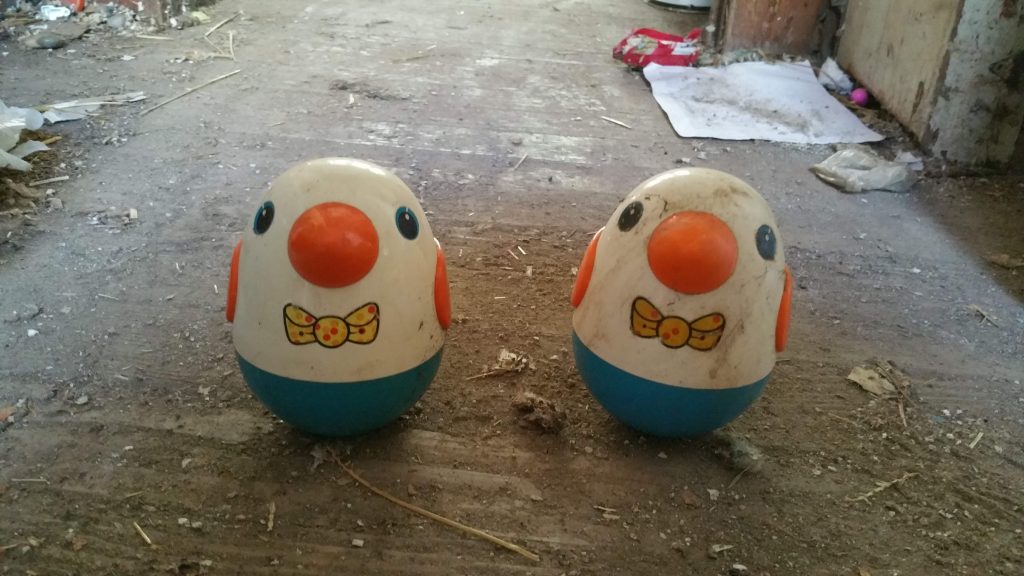 Come play with us, Danny.

Remember when fast food restaurants had non-disposable plates and cups? Me neither. 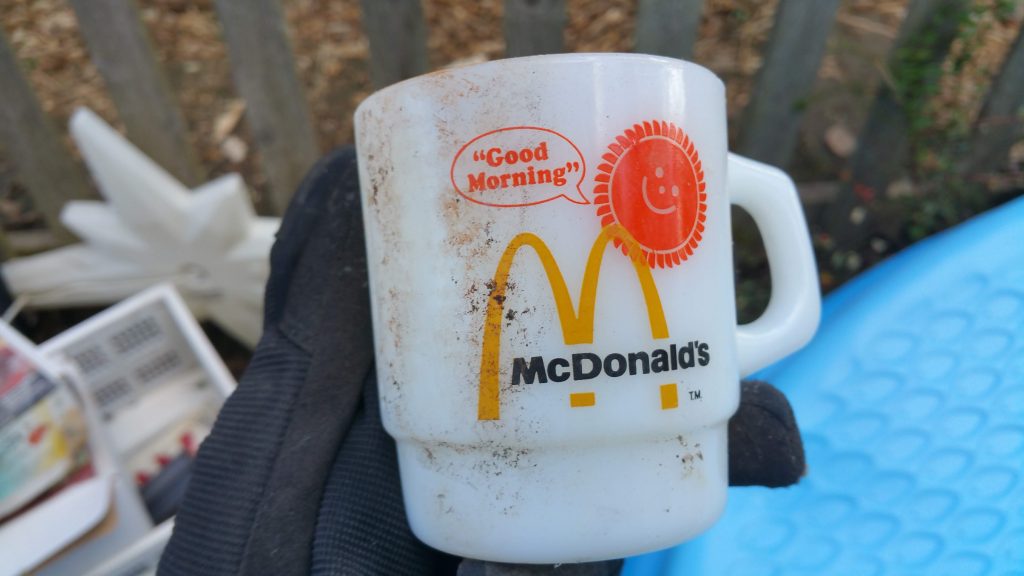 We were nearly finished for the day, as we were all just about exhausted. We closed up the end of the dumpster so that we could top it off from the upstairs bathroom without spilling out the end. Then, the final push to bring up a few more boxes was made, just to see if there was any other cool stuff.

That brought up the birds.

We knew that she had a small selection of parrots, not just from the birdseed, cages, and countless sticks doubtlessly used as perches, but also from a single parrot skull we found on the basement stairs.

Apparently she had three more. 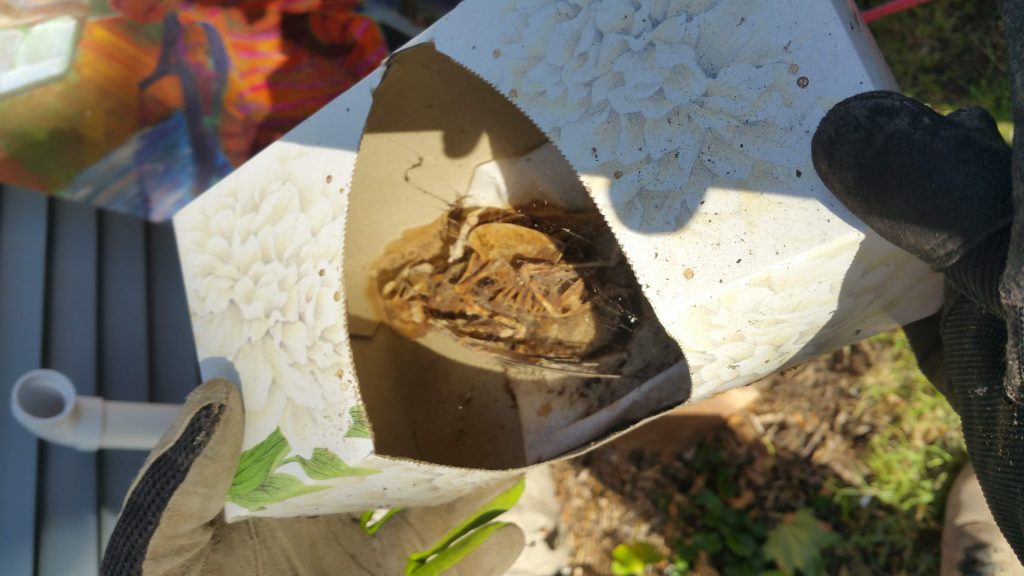 I think being in an open box helped this one decompose better. 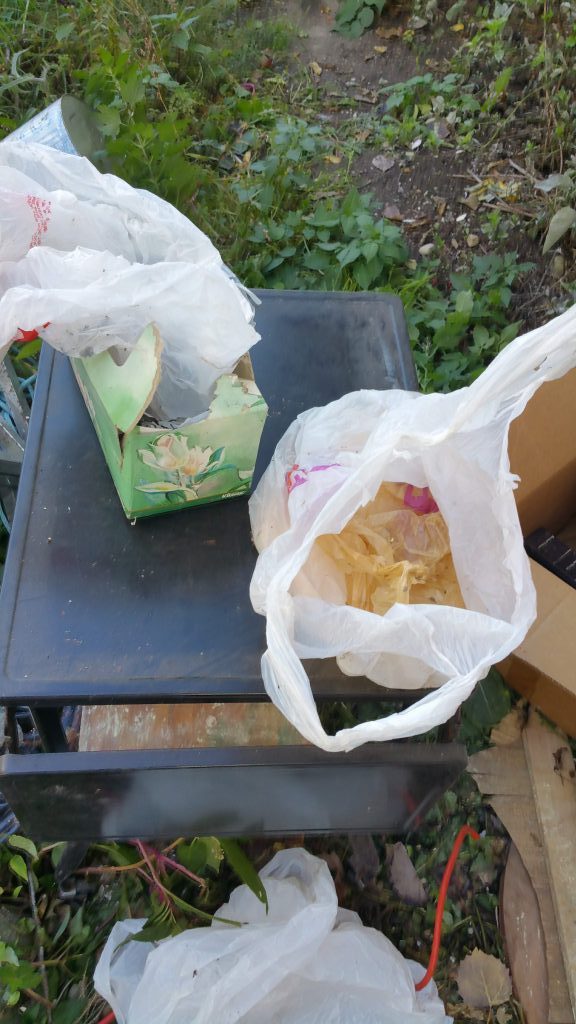 The ones in the bags were not so hot. 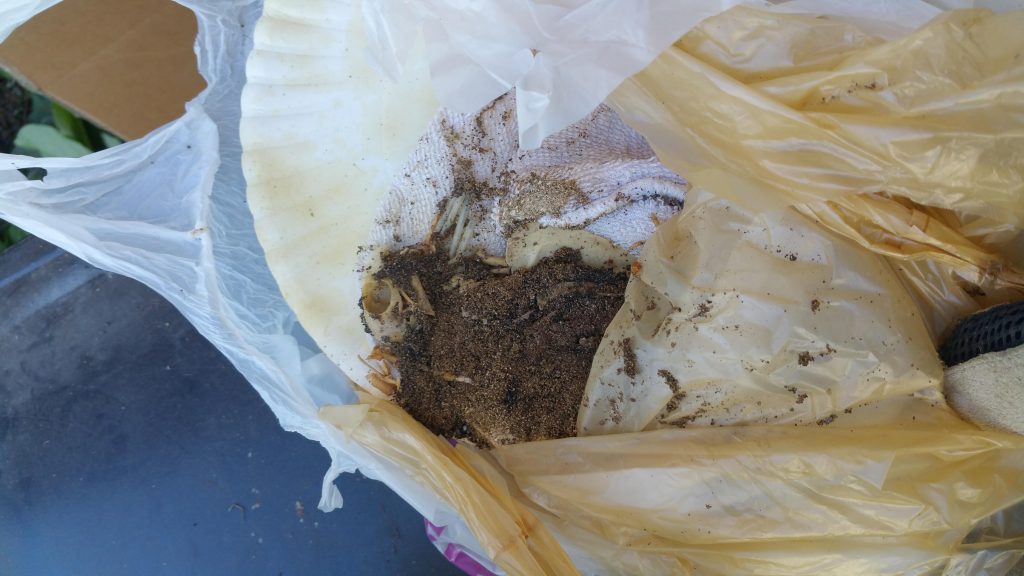 There’s definitely an ex-parrot in here.

I can easily see why one would place their deceased pets into a plastic bag and then put that bag in a tissue box. But, to then place that box in the basement instead of burying it outside, I cannot fathom.

It’s possible the owner intended to bury them eventually, but they were too busy burying themselves in junk to get around to it. There always seems to be the ‘intent’ of ‘getting around to it’, but no execution.

Is the dumpster full?

Not quite. There is just one more room we have to clean out, and it’s everyone’s least favorite, due to its cramped size, questionable contents, and bad proximity to the dumpster. The bathroom.